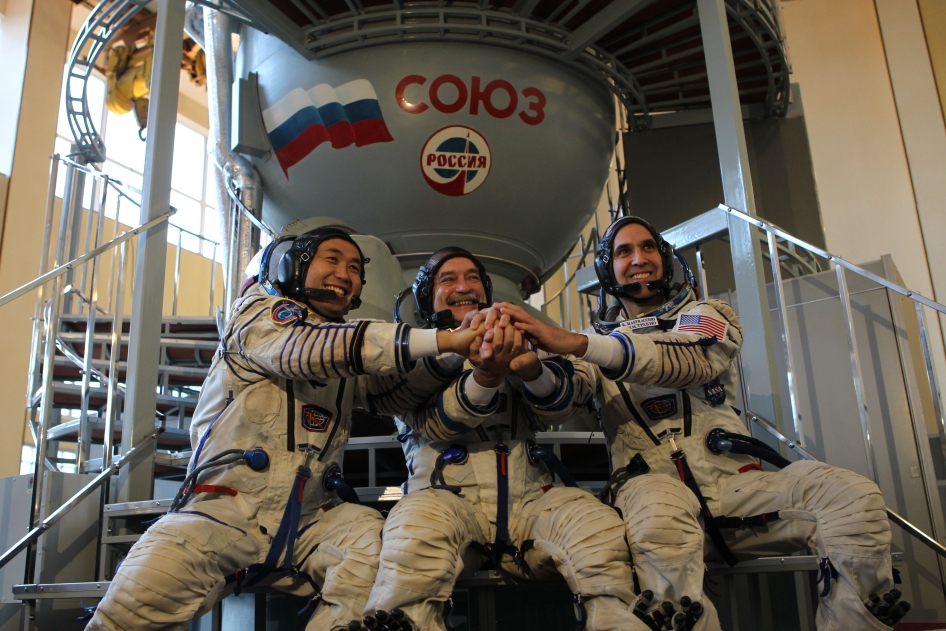 NASA announced on Friday November 1 that the next launch of three crew members to the International Space Station (ISS) will be shown on the big Toshiba Vision Screen in New York’s Times Square. The launch from the Baikonur Cosmodrome in Kazakhstan is scheduled for Wednesday, November 6 at 11:14 p.m. EST. NASA TV will broadcast live launch coverage from the Baikonur Cosmodrome beginning at 10:15 and continuing until 11:45 p.m.

The Soyuz spacecraft will carry NASA astronaut Rick Mastracchio, Russian Federal Space Agency (Roscosmos) cosmonaut Mikhail Tyurin and Japan Aerospace Exploration Agency (JAXA) astronaut Koichi Wakata to the ISS. There they will join six crew members already on the station: Karen Nyberg and Mike Hopkins of NASA, Lucia Parmitano of the European Space Agency (ESA) and Fyodor Yurckikin, Oleg Kotov and Sergey Ryazanskiy of Roscosmos. This will be the first time since May, 2009 that nine crew members have served together aboard the ISS without a space shuttle. On November 10 Yurchikin, Nyberg and Parmitano  will return to Earth aboard a Soyuz, bringing the station crew back down to six. Since the retirement of NASA’s space shuttle fleet in 2011 the Soyuz has been the only spacecraft capable of taking crew to and from the ISS. NASA is currently working with three U.S. companies (SpaceX, Boeing and Sierra Nevada Corporation) to develop and test spacecraft that could lead to commercial launch services for both government and commercial customers from the United States. Two U.S. companies, SpaceX and Orbital Sciences, currently provide commercial cargo services to the ISS.

Having the launch displayed at Times Square comes at a time when NASA is trying to increase public awareness of research being performed aboard the orbiting laboratory. This task was made more difficult during the recent government shutdown because most of NASA’s workforce was furloughed and its websites and social media accounts were inactive.

“The space station serves as a unique laboratory for researchers around the world, home to astronauts from multiple countries, and was built with international cooperation, so it’s fitting to show the launch of the next crew in the most cosmopolitan city in the United States,” said William Gerstenmaier, NASA’s associate administrator for human exploration and operations.

This isn’t the first time that NASA has used the large Toshiba Vision Screen. A crowd of thousands in Time Square watched the August 5, 2012 landing of the Mars Science Laboratory rover – Curiosity. In the weeks that followed, images of the surface of Mars were shown on the screen. During the 2012 New Year’s Eve celebration in Times Square the screen showed a special New Year’s greeting from Curiosity.