The man who fell from space: Felix Baumgartner interview 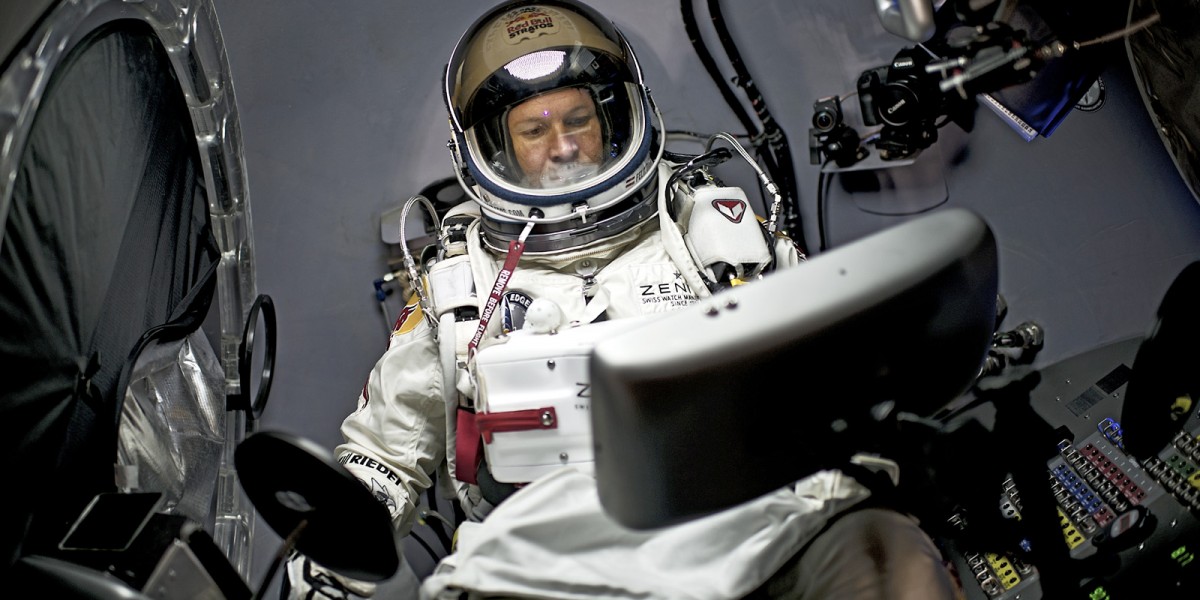 It has been one year since Felix Baumgartner made history by jumping from the very edge of space. A recent interview highlights his thoughts a year later. Photo Credit: Joerg Mitter, Red Bull Content Pool

What exactly is the right stuff? Other than the name of a famous movie about the space race, it’s a state of mind. The term is a throwback to a time when character counted — when men routinely risked their lives not to get rich, bloviate or self-aggrandize, but for their country, science, exploration and the joy of pure competition.

Clash, a fellow and director at The Explorers Club, is a seasoned adventurer himself. In reporting for Forbes and other publications over the last two decades, he has skied to the South Pole; driven the Bugatti Veyron at its top speed of 253 mph; flown in a MiG-25 at Mach 2.6 to the edge of space; visited the North Pole twice; and climbed the Matterhorn, 23,000-foot Aconcagua and virgin peaks in Antarctica and Greenland. He has also purchased a ticket from Virgin Galactic Airways to fly into suborbital space.

A year ago this week, Felix Baumgartner – outfitted in a special pressure suit – rode a helium balloon to 128,100 feet above sea level and jumped from his Red Bull Stratos capsule gondola over Roswell, N.M.

In less than a minute in the near vacuum of the stratosphere, his body accelerated to 833.9 mph (Mach 1.24), breaking the sound barrier. After more than four minutes of freefall (and slowing by friction in the lower troposphere), he deployed his parachute and coasted safely to earth. Baumgartner discussed his views about his record-breaking jump with The Explorer’s Club. Photo Credit: Felix Baumgartner.com

The Austrian, now 44, had trained extensively for his big day. In addition to past stunts — including a 1999 BASE jump from the Christ the Redeemer statue in Rio de Janeiro, Brazil — he had survived two high-altitude training jumps in 2012.

I originally met the daredevil a few years back when Stratos was in its early stages. We reconnected this month, and what follows is Baumgartner’s take on life a year after his jump. For more, readers can watch a fascinating just-released documentary, Mission to the Edge of Space: The Inside Story Behind Red Bull Stratos, at rdio.com/redbullstratos.

Jim Clash: You did training jumps before the big one. What did those teach you and how did the big jump differ?

Felix Baumgartner: “Those two test jumps — from 71,581 feet and 97,145 feet — were important rehearsals for what was ahead. Not only did they allow us to fine-tune the equipment, but they also enabled us to refine our procedures. And they gave me a taste of what it was going to be like freefalling through a near vacuum in a pressure suit. In the final jump on October 14th, the descent through extremely thin air was much longer. Not having any wind resistance to work against is a strange feeling for a skydiver! And, of course, I went into a spin — which we expected — but it was even harder to control than I had imagined.”

FB: “Well, it was part of our established protocol that if for any reason I couldn’t see, I would not jump. I would have had to descend in the capsule. But we knew that jumping and coming down using my skydiving skills was the best, safest option. When I began to feel concerned that my vision could become limited, I discussed the options with the team at mission control. We did a test of the visor defogger that indicated it should function appropriately during my freefall, so I decided to go ahead.”

Baumgartner detailed the elements of his journey that filled him with joy – and with dread. Photo Credit: Felix Baumgartner

JC: How important was it having Kittinger as your Cap Com for the jump? Was he a bit like a father figure?

FB: “It was very reassuring to have Joe in my ear. He’s the only person who really has a firsthand idea of what it’s like to undertake that kind of mission. And yes, he did become like a father figure to me. I even went to Florida to ring in 2013 with Joe, his wife and some other members of the team.”

Jim Clash: For us mere Earth mortals, describe the view as you prepared to jump. What was your last thought?

FB: “It was beautiful — I could see the curve of the earth below me, and above, the sky was just black. I’d never seen black sky before. I did try to breathe in that special moment, but at the same time, I was all business. I knew there was only about 10 minutes of oxygen on my back, and I couldn’t allow myself to become distracted. I had to jump.”

JC: When you broke the sound barrier on the way down, becoming the first person without an aircraft to do so, was there any feeling or sound you noticed as the jumper?

FB:  “No. I knew I was accelerating very fast, but in the suit I didn’t feel or hear anything significant at that moment. It was only when I landed and the crews said they’d heard my sonic boom that I was sure I’d broken the speed of sound. And then, of course, the data confirmed it.” JC: How do you handle fear?

FB: “Personally, I think a certain amount of fear is healthy. It means you recognize the hazards and — as long as you can manage fear — it keeps you sharp. You have to be in the right mindset so it doesn’t block you. During the Red Bull Stratos preparations, for example, when I began to feel claustrophobic wearing the suit, I worked with a psychologist to help me see the suit as a tool that would keep me alive, rather than focusing on how it limited my range of motion for skydiving.”

JC: When we first met, your biggest fear was a flat spin. I know you had some problems in that respect coming down. What happened and how did you control it?

FB:  “As you know, spinning is common when objects fall from high altitudes. A flat spin is especially dangerous because blood can rush to your feet, causing a blackout, or to your head, which can be even worse. As I trained, I experimented with small movements — like adjusting an arm slightly — to try to control the spin. It took several attempts, but once I found the position that worked, I never lost it. Still, staying stable took a lot of effort all the way. The reassuring thing was that I knew the team had built a drogue stabilization chute into my rig, and I could have deployed that drogue if I needed it. It also would have deployed automatically if the G-forces had become too strong and sustained. I’m happy I was able to regain control without the drogue, because it would have slowed me down.”

JC: When you felt the chute open, what were your thoughts?

FB: “Even when my chute opened, there was still work to do all the way to the ground. It was only when I landed that I really felt as if a huge weight was off my shoulders. After so many years of planning and preparation, we’d finally done it.” Baumgartner weighed in on the scientific aspect of the flight and what it told researchers about what the human body could withstand. Photo Credit: Felix Baumgartner

JC: A year later, what’s your biggest takeaway from the jump?

FB: “There are too many memories to choose from. But I think the biggest scientific takeaway is that researchers now know a human can safely accelerate through the sound barrier without an aircraft. And the monitor I wore provided the medical team with over 100 million data points – the first physiologic data ever taken from a human falling at supersonic speeds. Hopefully this will be helpful information as aerospace researchers look for ways to enable escape in emergency situations. Something I will never forget is all the support and encouragement I received from people around the world. That really got me through the tough times and it still means a lot to me today.”

JC: What’s next? Do you want to go all the way to space (100 km) with one of the suborbital companies?

FB: “A trip to space would be incredible, but my short-term objective is to put my helicopter piloting skills into public service. Even before the Red Bull Stratos jump, I had my private helicopter pilot’s license in Austria and the U.S., as well as my commercial European license. In the future, I would like to pilot mountain rescues or firefighting runs — something that will make a difference for people.”

This article was written by Jim Clash and originally appeared on AskMen.com, it can be viewed here: Felix Baumgartner