Stunning new image from Cassini of Saturn – and Mars, Earth and Venus too! 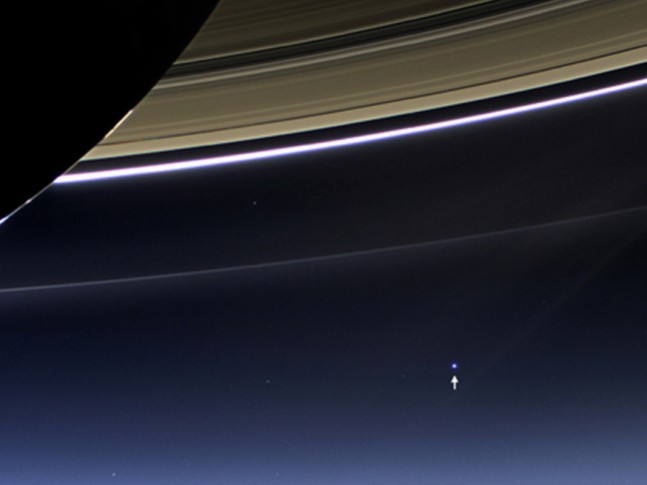 The Cassini spacecraft has taken another stunning new panoramic image, released yesterday, showing Saturn and its rings in all of their glory. It has done this before, including ones showing the Earth and Moon in the far distance, as tiny specks of light. But this new image is even better; not only does it again show Saturn and its rings beautifully backlit against the Sun in natural color, but this one also shows Mars and Venus, as well as the Earth and Moon!

The new image was unveiled yesterday at the Newseum in Washington. It was taken on July 19, 2013 for The Day the Earth Smiled event, when for the first time, people had advance notice that a spacecraft would be taking a picture of Earth, all the way from the outer solar system. As part of that, the Wave at Saturn campaign had people all over the world find Saturn in the sky at the time and wave to it.

As Carolyn Porco, Cassini’s imaging team leader, described it, “In this one magnificent view, Cassini has delivered to us a universe of marvels. And it did so on a day people all over the world, in unison, smiled in celebration at the sheer joy of being alive on a pale blue dot.” Close-up view, taken from the larger panorama, of the Earth and Moon as seen by Cassini.
Photo Credit: NASA/JPL-Caltech/SSI

The mosaic covers about 404,880 miles (651,591 kilometers), showing the planet’s inner rings beautifully backlit by the Sun, including the tenuous outer E ring, which looks more like a soft halo in the image. The panorama is composed of 141 individual wide-angle images, taken over a span of four hours. Cassini was about 746,000 miles (1.2 million kilometers) away from Saturn at the time the images were taken.

“This mosaic provides a remarkable amount of high-quality data on Saturn’s diffuse rings, revealing all sorts of intriguing structures we are currently trying to understand,” said Matt Hedman, a Cassini participating scientist at the University of Idaho in Moscow. “The E ring in particular shows patterns that likely reflect disturbances from such diverse sources as sunlight and Enceladus’ gravity.”

If you look even closer, in the highest resolution versions of the image, seven of Saturn’s many moons can also be seen, including little Enceladus, famous for its water vapour/ice geysers spewing out from its south pole. It is also these very fine particles which make up the E ring. According to Linda Spilker, a Cassini project scientist, the study of Saturn and its rings and moons can also help scientists to better understand how planetary systems form around  stars: “Beyond showing us the beauty of the Ringed Planet, data like these also improve our understanding of the history of the faint rings around Saturn and the way disks around planets form – clues to how our own solar system formed around the sun.” A total of 809 background stars are also visible in the image.

More information and images are also available on the CICLOPS website.

The Cassini mission has already been exploring Saturn and its moons for more than nine years; barring any technical problems, it is expected to continue until at least 2017, providing a further wealth of information on Saturn and its fascinating moons, which are like a miniature solar system in their own right.