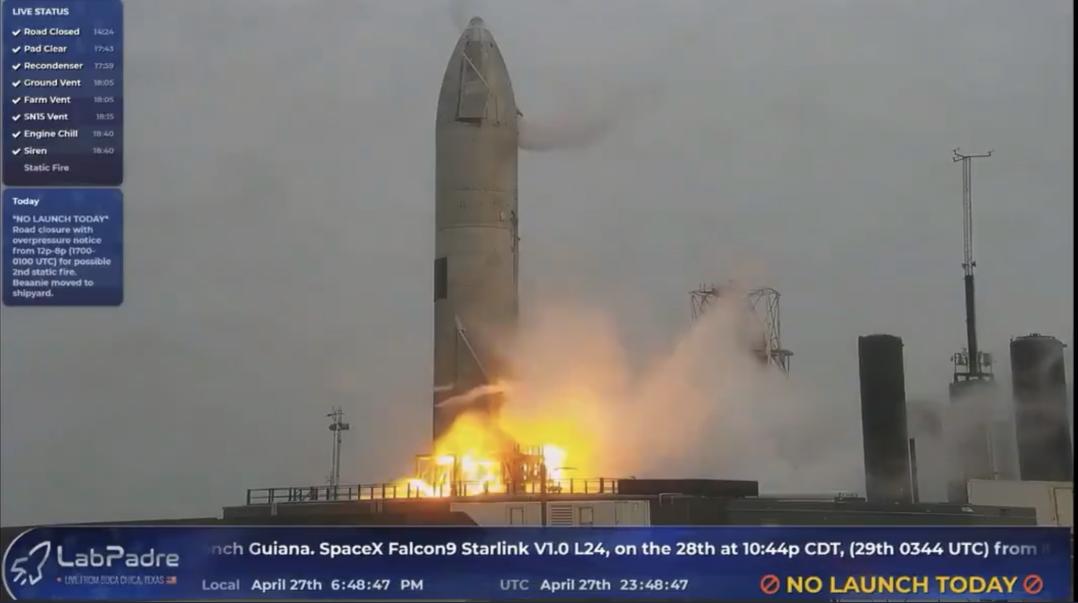 SpaceX’s latest and improved version of Starship, SN15, has entered the static fire phase of its testing campaign with two recent firings of its Raptor engines in the last 24 hours.

Monday saw the much-awaited first test go off without a hitch, with Elon Musk stating on Twitter that the static fire was completed and the company is preparing for a flight later this week. 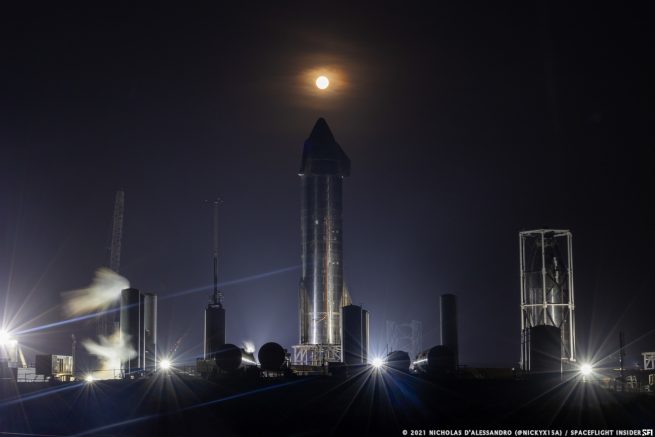 However, road closures for the following Tuesday did remain in place with another round of overpressure notices delivered to local residents, and SN15 breathed to life once again in a somewhat shorter-duration test possibly involving less than all three Raptor engines.

Musk returned to Twitter to state that this was a header tank test and that all looked good.

A road closure for Wednesday remained in place, although as of this writing it does not appear SpaceX used it as it was a backup for Tuesday’s test.

Two further closures have just recently been posted by the Cameron County website for Thursday from noon to 8 p.m. CDT and Friday from 8 a.m. to 5 p.m. CDT in support of the associated temporary flight restrictions currently in place for those days.

Per the filed documents they are flight opportunity closures, but without an FAA license issued yet, they and the TFRs serve more as a placeholder for those dates should approval happen by then.

The Flight Termination System which is a standard indicator for imminent flight has not been installed yet, either, along with no word of an FAA inspector presence for the flight windows. 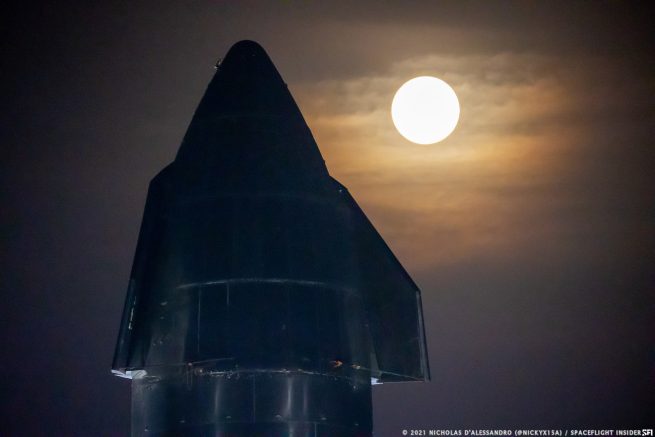 As is usual with Starship testing, the timeline of events has become somewhat unclear moving forward. Stay tuned for more updates as they occur.

Meanwhile in between tests, progress at the Orbital Launch Site continues at breakneck speed with the launch integration tower superstructure steadily rising from the ground and two ground support equipment tanks made of repurposed Starship hardware installed.

Back at the build facility, the High Bay is unusually empty with the scrapping of pathfinder Super Heavy BN1 complete and SN16 taking shape in the nearby Mid Bay.

The blunt Starship nosecone testing structure that is believed to be a max-q simulation stand was also moved to the suborbital testing facility before Starship SN15’s static fire tests and the use of it remains to be seen.

The Starship nosecone inside, believed to be that of one of the scrapped SN12 to SN14 models, will likely be pressurized and then subjected to the simulated forces of the most stressful part of an orbital launch. 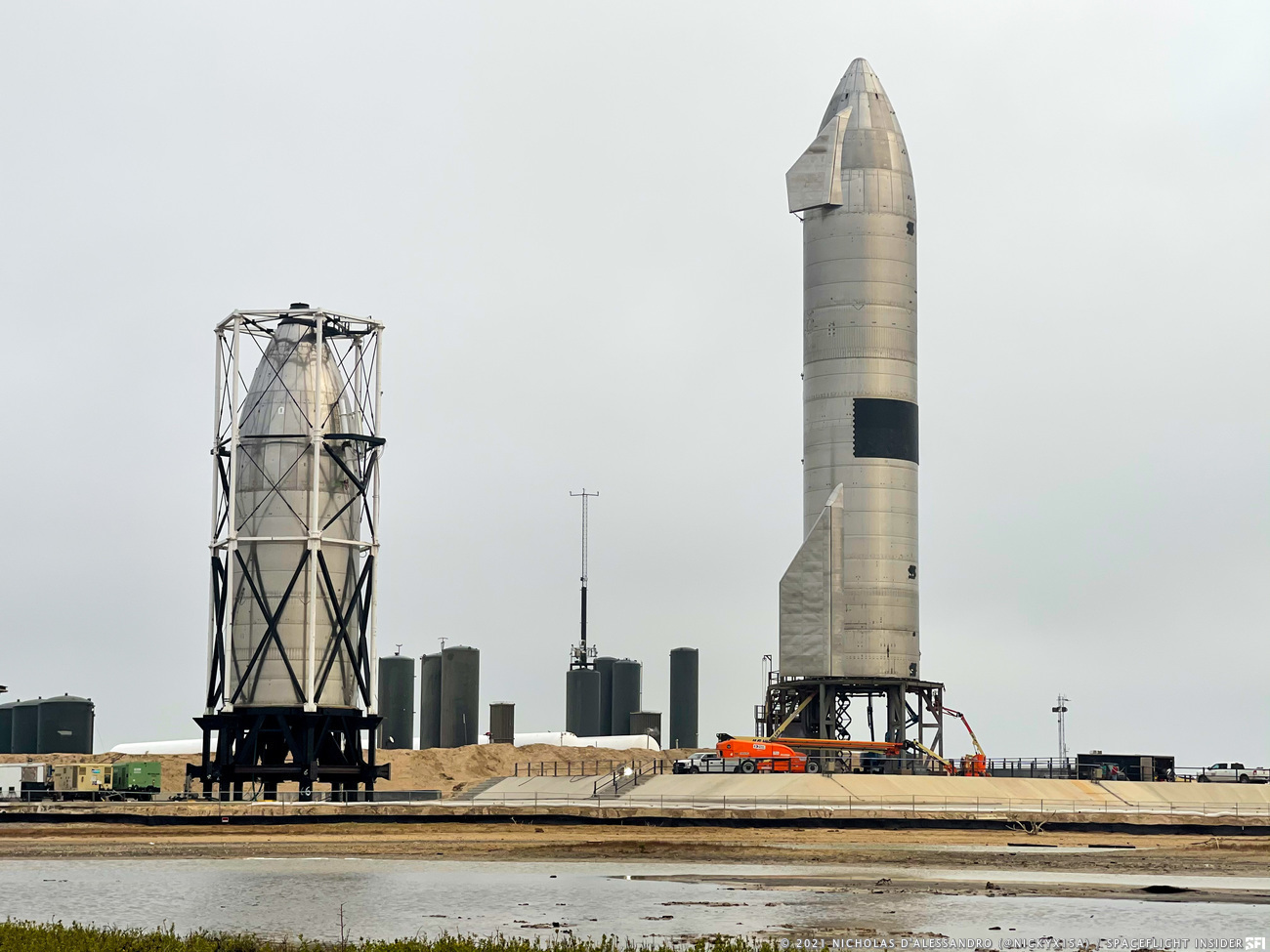 it’s a rocket not spaceship…wtf,with that money he could build real spaceship not some akward rockets like nasa and china and russia… but it’s all fraud…like everything today..

It will be exciting when they finally launch SN15 see if she will land properly.

We had a meeting scheduled with Mr. Robert Luna the morning of the 20th,when this baby rolled out right in front of us! The max-q nose cone was a magnificent sight to behold. We eventually got together, and we were invited back!
What a treat to stand this close to witness one more footprint toward the Heaven’s.

Until somebody invents anti=gravity, it will take rockets to reach space, whether Low Earth Orbit, the Moon or Mars or beyond. Returning to Earth or landing on Mars beyond using capsule spacecraft requires advances in technology. The SN-series are test articles used to develop the technology to create a spaceship. Whether SN-15 succeeds or SN-27 or whatever, SpaceX will ultimately succeed. Obviously, you have never actually been involved in any kind of aerospace development program.

But ultimately, the wholesale alteration of Cost-to-Orbit was not just accomplished in order to make Space a place where Business and Industry could be truly competitive, at least for more than the MegaCorps, but to lay the ground work for something even more ambitious.
Put simply as possible, Elon Musk did not accept that Humanity had to have “all of its eggs in one basket.”
To that end, he not only (almost single handedly) made the move to the orbital space above Earth possible for companies that are in the middle ground, not just the Super MegaCorps.
No, he has a bit loftier goal. Elon believes that Humans as a species, MUST have working, independent colonies on worlds Other than Earth. Call them Outposts, Colonies or Cities, they just need to be far enough away that a single world jarring event won’t extinguish Humanity’s candle in one fell swoop. And to this end, they must be Independent from Earth, economically and nutritionally. I.E. They don’t need any kind resupply in order to function. And this includes the ability to make finished goods from LOCAL raw materials.
This is why he developed Starship & the Superheavy Booster.
(Please tell me I’m not the only one who thinks that would be a truly Awesome Band Name…)
35 story booms ticks that do nothing more than lob Volkswagen Beetles around we’re simply never going to get the job done. And any different WAY of getting enough payload to actually make any difference wasn’t going to happen with the “old guard” in charge of Space Access.
So, Elon said what many other driven, visionary entrepreneurs have, “If it doesn’t exist, then I guess I’ll just have to make it myself.”

It’s a spaceship {redacted}, designed to fly on the top of a booster and if necessary, land on a planet,take of again and return to a designated target.