Starship SN15 on pad B for possible encore flight 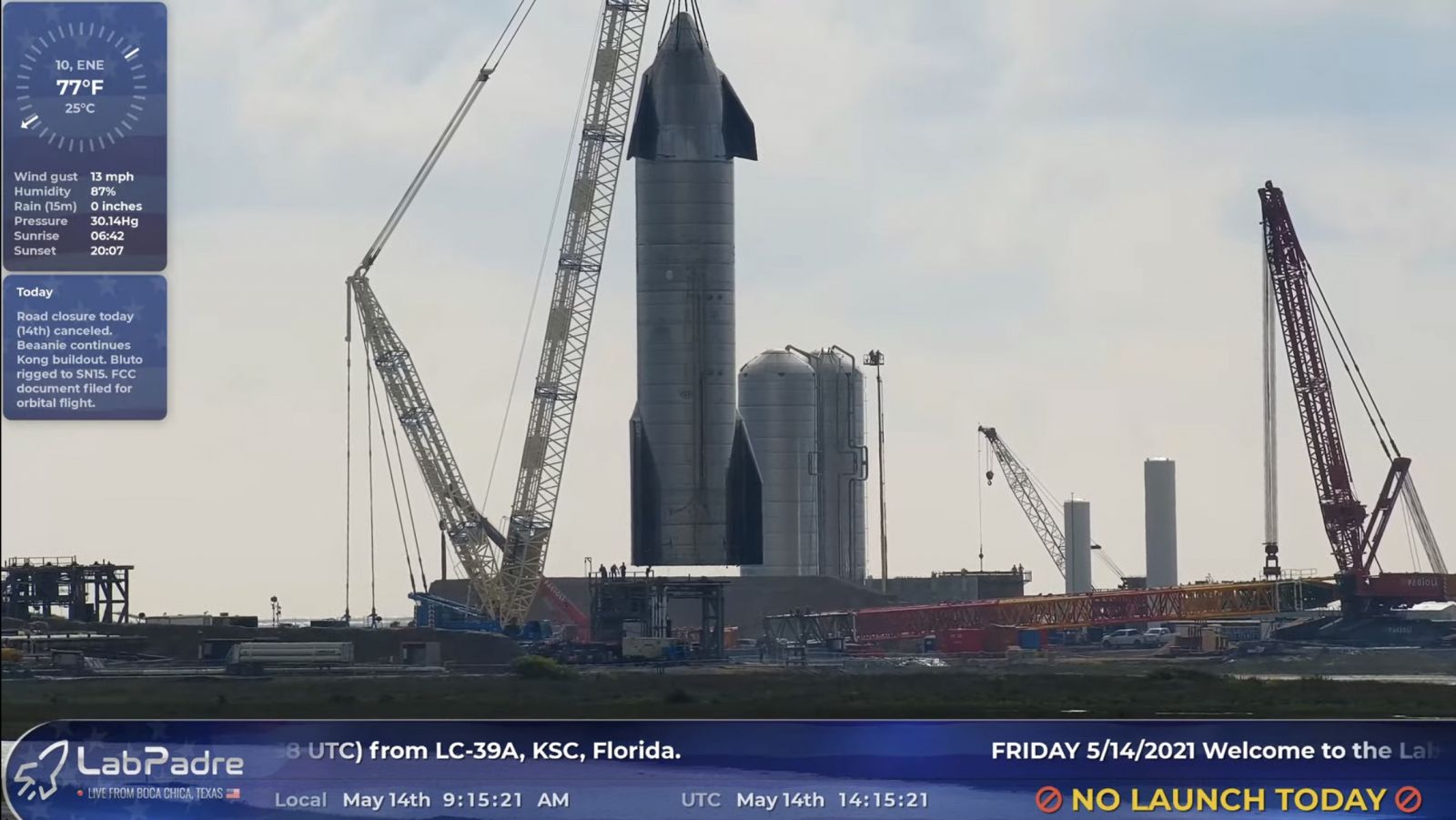 Starship SN15 is placed back on the pad for a potential second flight. Credit: Louis Balderas Jr. / @LabPadre

SpaceX remains as committed as ever to its breakneck pace of testing at its Boca Chica, Texas, launch facilities. Starship SN15, which conducted the first fully successful 10-kilometer test flight of the program with a clean, intact landing, was moved back to the launch pad on May 11, 2021, just under a week after that successful May 5 flight.

Observers of the program initially speculated it might be rolled back up Highway 4 to the build facility for inspections and refurbishment, but on May 14, after a few days of high wind delays, SpaceX has put it on launch pad B in a move toward a potential second flight. 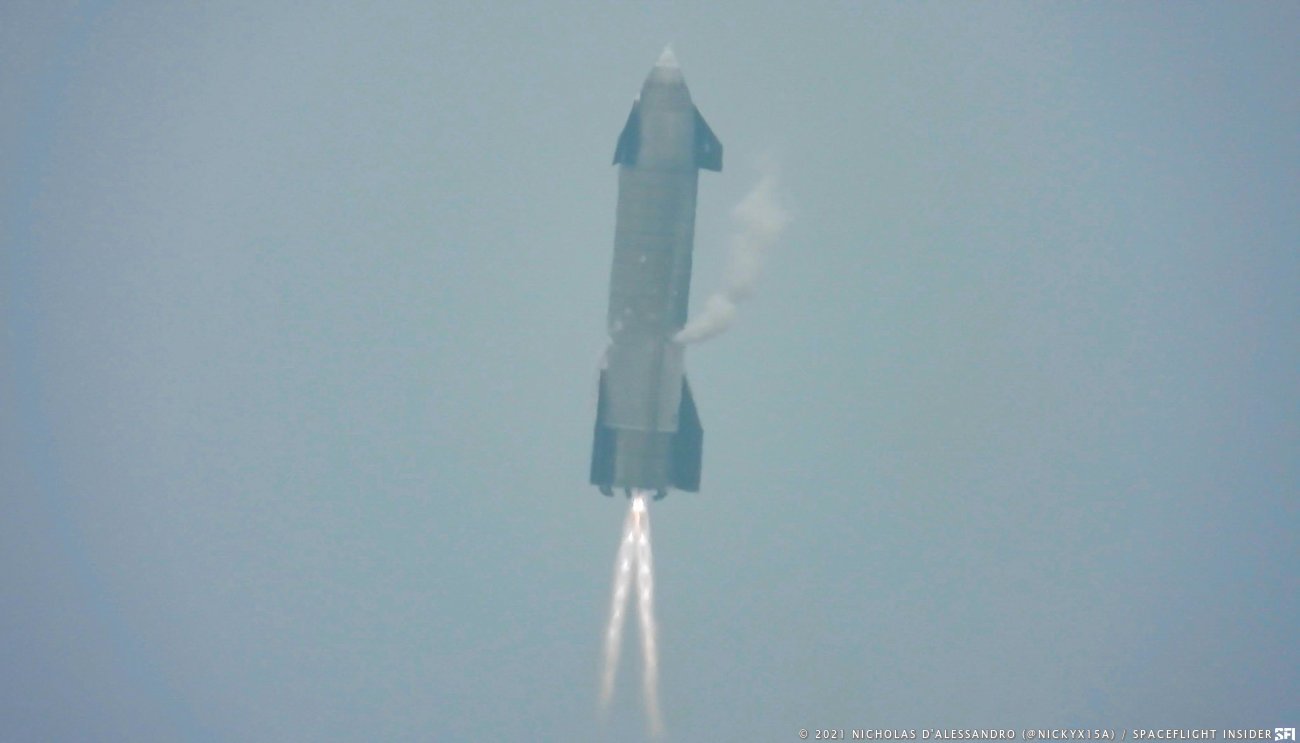 Starship SN15 performs its landing-flip maneuver to softly touch down on the pad during its May 5, 2021, test flight. Credit: Nicholas D’Alessandro / Spaceflight Insider

Elon Musk confirmed a second flight could happen soon on Twitter, but a few key things are likely necessary before that can occur as it’s not just a simple matter of fueling the vehicle and sending it up again.

A repeat of the pre-flight cryo proof and static fire tests is almost certainly required, which would shake out any bugs not caught in initial post-first-flight inspections. Reuse of the now flight-proven Raptor engines is also one of the main considerations during this new round of testing.

Starship SN15 bucked the Raptor replacement trend by being the first full-scale Starship to not undergo a Raptor swap before flight, smoothly proceeding through all its first tests to launch with its original complement of Raptors SN54, SN61, and SN66. It remains to be seen if new inspections and testing will require a replacement of any of these engines.

Not to be forgotten, Starship SN16 remains in the high bay for now and was recently moved deeper inside the building and to the side in order to possibly make room for the next Super Heavy booster test article to be stacked.

There is speculation on when or if Starship SN16 will roll down Highway 4 to join Starship SN15 as the second-ever pairing of two Starships at the launch site at the same time, the first being Starships SN9 and SN10 back in January. 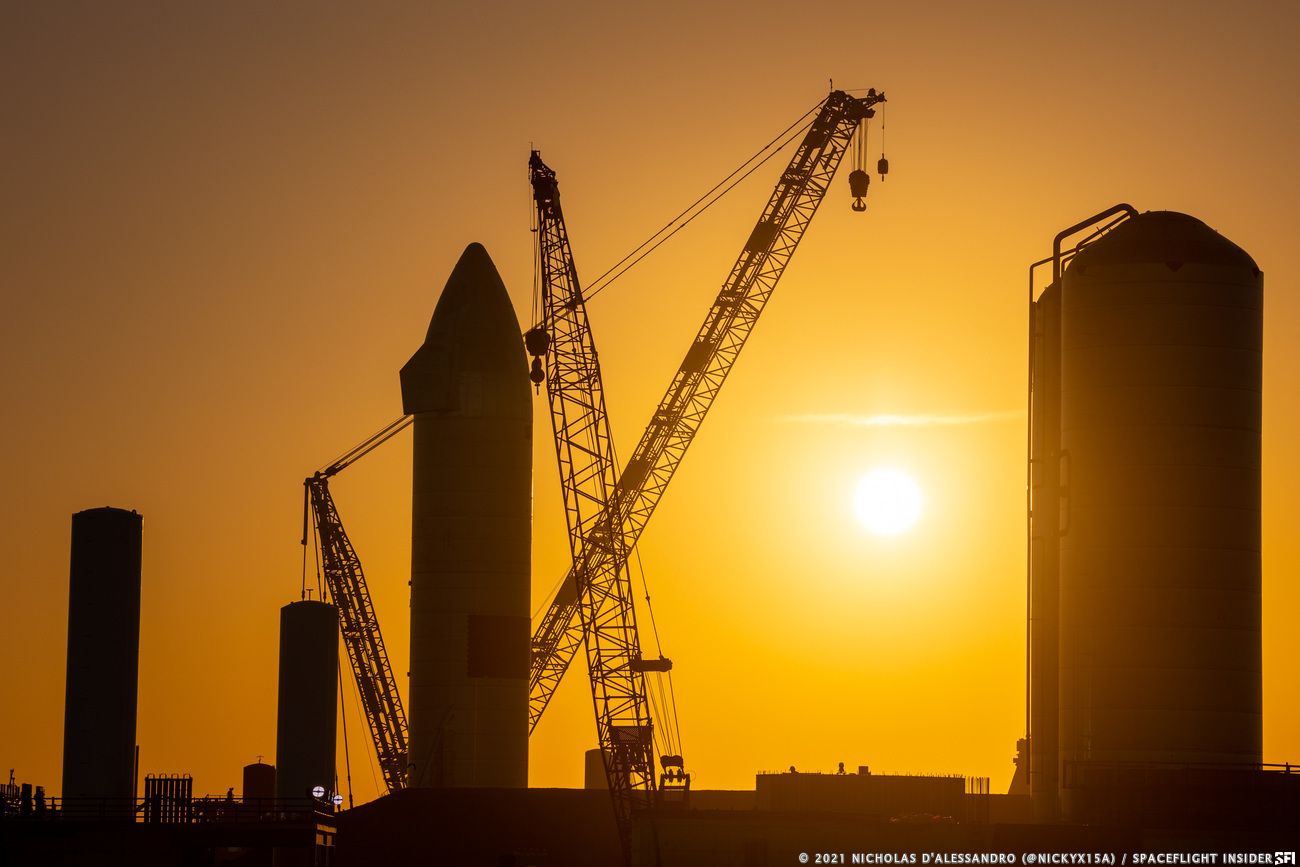 A view of cranes around the landed Starship SN15 at sunset. Credit: Nicholas D’Alessandro / Spaceflight Insider

Visually Starship SN16 appears complete and ready to roll. However, as is usually the case with the Starship program, plans remain very fluid. SN16 could wait until SN15 flies again, or be scrapped altogether in favor of pushing toward the upgraded orbital flight vehicle.

SpaceX has set a precedent for this before with the scrapping of Starships SN12 through SN14 in favor of pushing forward with the upgraded SN15. Elsewhere at the build facility sections for future Starships SN17 and beyond have been spotted in various stages of production, and the Max-Q blunt nosecone testing structure has returned from the launch site and had the nose cone removed indicating completion of those tests for the time being.

For now eyes will remain on the second flight test process for SN15, which up until this point has not been observed for any full-scale Starship since SN8-SN11 were all lost to various landing burn mishaps.

The last Starship test articles to be recovered after a flight hop test, the nose and flap-less SN5 and SN6, did not end up reflying and were eventually scrapped at the build facility.