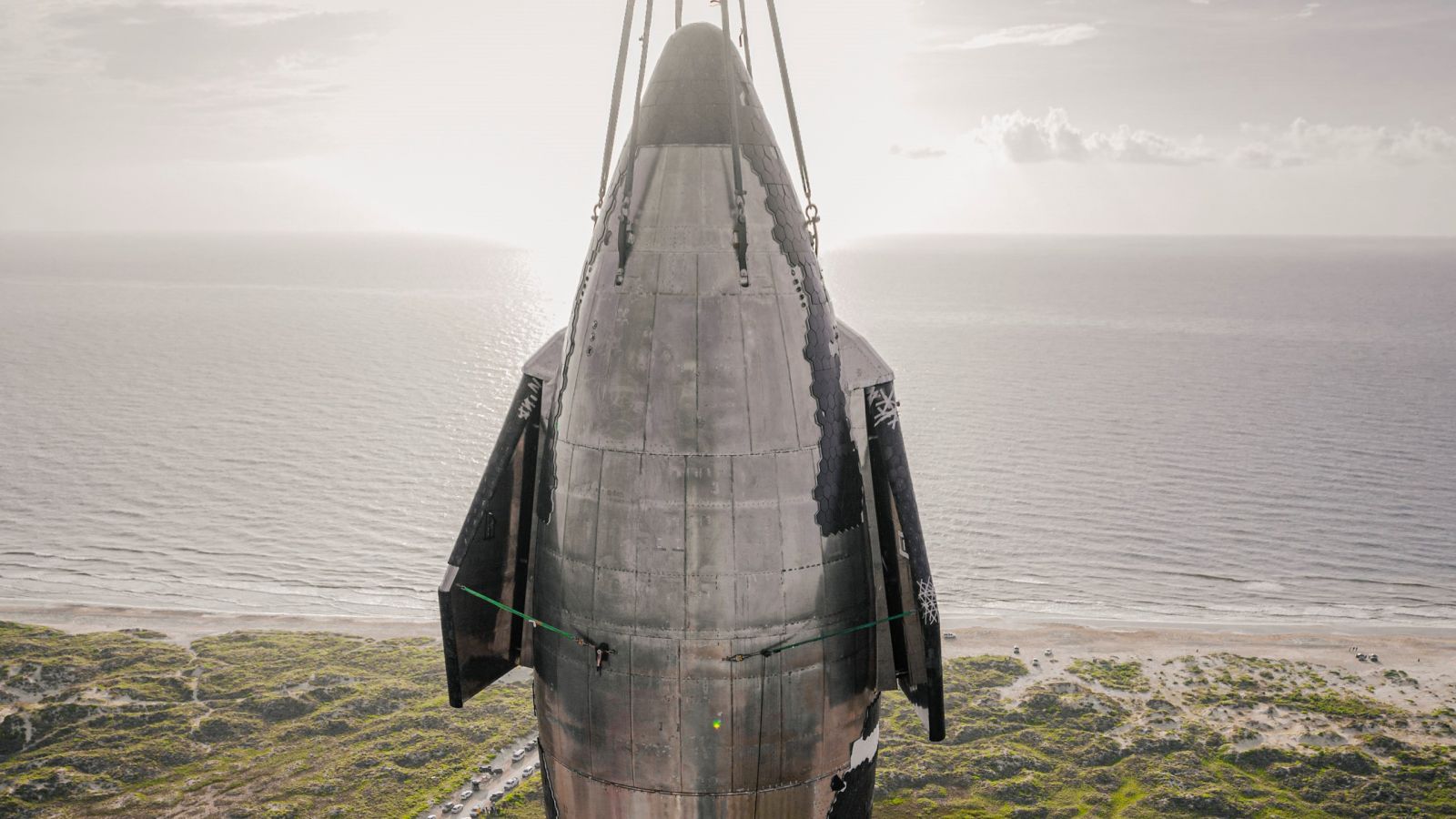 The nose of Starship Ship 20 when it was briefly stacked atop a Super Heavy booster earlier in August. Credit: SpaceX

SpaceX’s Starship prototype Ship 20 underwent cryogenic proof testing, one of many tests and steps needed before the company can fly its first orbital Starship mission.

Late in the evening Sept. 29, 2021, at SpaceX’s Starbase in Boca Chica, Texas, Ship 20 was loaded with super-cold liquid nitrogen in order to simulate the pressures and temperatures of its liquid oxygen and liquid methane propellants.

“Proof was good!” SpaceX CEO Elon Musk tweeted shortly after the conclusion of the test.

Overall, SpaceX’s interplanetary rocket and its ground support equipment are continuing to take shape at the company’s build and launch site in Boca Chica, Texas.

Those familiar with the company’s plans to recover the giant Starship boosters after launch might recognize the grabber arms, known as “chopsticks” on top of the orbital launch tower.

Affectionately known as “Mechazilla,” this mechanism aims to literally catch the booster as it makes its way back to the launch site shortly after liftoff in order to be recovered, processed, and then flown again on a later mission.

Photographers in South Texas have spotted these massive grabbers as they await final installation onto the orbital launch tower.

While the giant chopsticks were moved closer to the launch pad, the 230-foot (70-meter) Booster 4 had to be removed from its position atop the orbital launch mount where it was undergoing pressure testing ahead of a future orbital flight.

Booster 4 is currently sitting near the original Starhopper water tower as the orbital launch tower awaits installation of the chopstick arms and various other ground support equipment.

Earlier this week, Ship 20’s thermal protection system experienced a slight hiccup as tiles were observed to be falling off the vehicle following the completion of thruster testing. Nothing official has been confirmed by SpaceX, but it’s likely these issues will need to be addressed prior to its maiden flight.

Before the company can launch an orbital flight from South Texas, however, the Federal Aviation Administration will need to grant SpaceX final approval for such an undertaking to occur.

One of the ways this process is being executed on a federal level is by way of public comments in conjunction with the FAA in regards to the potential environmental impact orbital launches might have on the local area. The regulatory agency is asking for public opinions and suggestions that may not have been addressed by either SpaceX or the FAA.

The FAA has opened up an online portal in which anyone can vocalize their opinions, concerns, or even ideas as orbital flights become closer to manifesting in Boca Chica.

While a target date for this flight has not been given, it is speculated that this launch will not take place until the early half of 2022.

Ship 20 with some impressive venting during the proof testing that's ongoing.