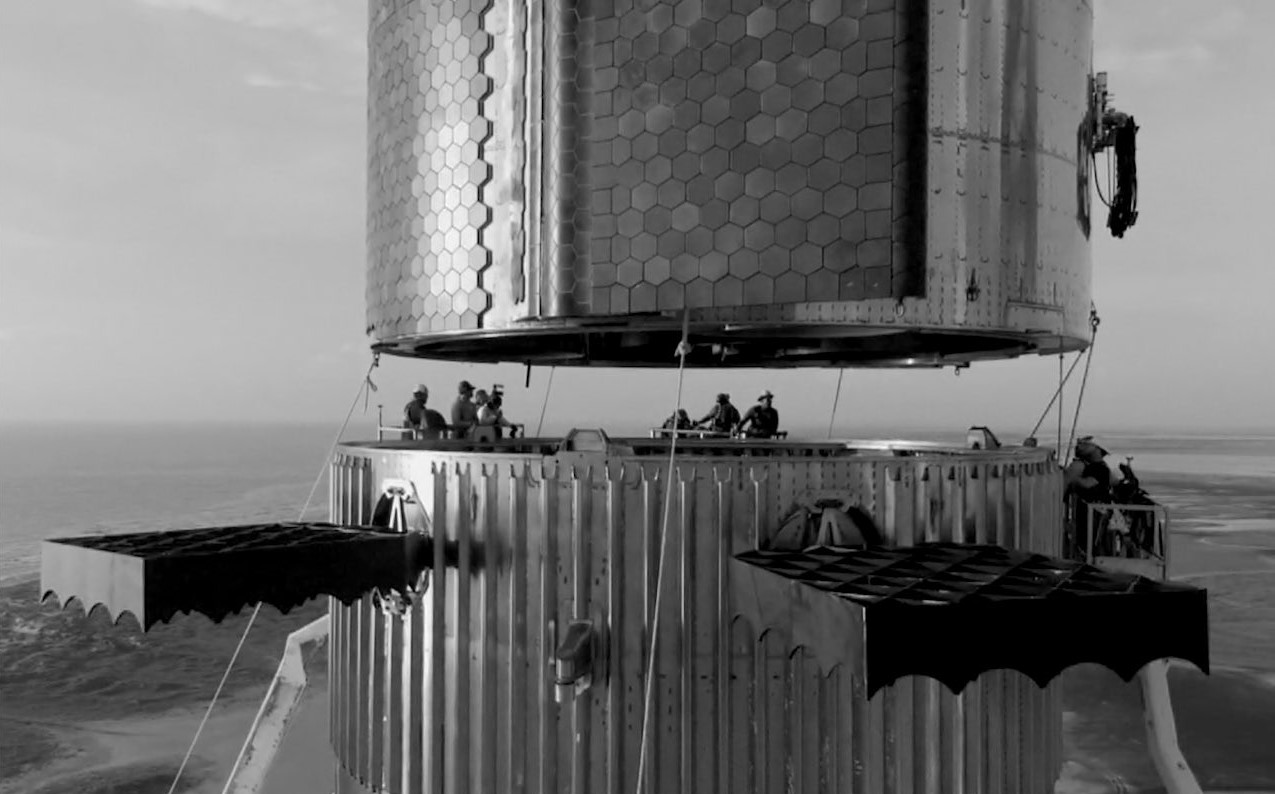 SpaceX engineers guide Ship 20 to the top of Booster 4 to create a fully-stacked Starship rocket on Aug. 6, 2021. Credit: SpaceX

Progress has been expedited by an order of magnitude as a fully-stacked Starship launch system made its historic debut last week in Boca Chica, Texas.

In an historic moment akin to the early days of the Apollo and Shuttle programs, Starship Ship 20 was mated to the Super Heavy Booster 4 in the early morning hours of Aug. 6, 2021, as teams at SpaceX’s build site began lifting the behemoth vehicle by crane. 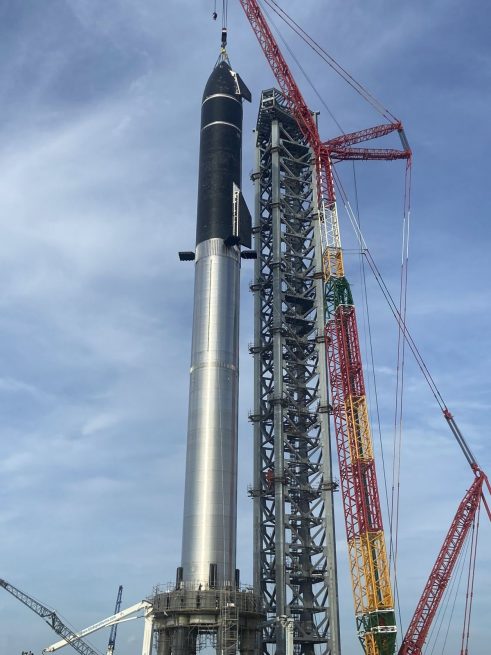 The meticulous process was made possible by a large group of SpaceX employees and contractors positioned high above the ground on large cherry pickers.

Aided by radios, hand signaling, and even several drones, Ship 20 was eventually hoisted and mated into place at around 8 a.m. CST (13:00 UTC) atop the company’s Orbital Launch Mount. Standing some 394 feet (120 meters) tall, Starship has dethroned the 363-foot (110-meter) Saturn V as the tallest rocket ever built.

Ship 20 was de-stacked about an hour after being mated into place where it was then rolled back to the nearby build site at Starbase.

The joining of the two vehicles came just a day after Ship 20 was rolled out to the Orbital Launch Tower. Featuring thousands of hexagon-shaped thermal protection tiles, the spacecraft was also given an updated aerodynamic design with slimmer control fins than previous iterations as the rear control fins were installed.

Ship 20 includes six total Raptor engines, including three Raptor Vacuum engines that will be used while the vehicle is in space.

Now back at the high bay, Ship 20 is expected to have its thermal protection system finished. Exactly how long this will take is unclear. A number of tests, checks and evaluations are required on both Ship 20 and Booster 4 before this vehicle can make its first orbital flight test.

There is also the matter of completing a Federal Aviation Administration environmental review, which could take several more months. 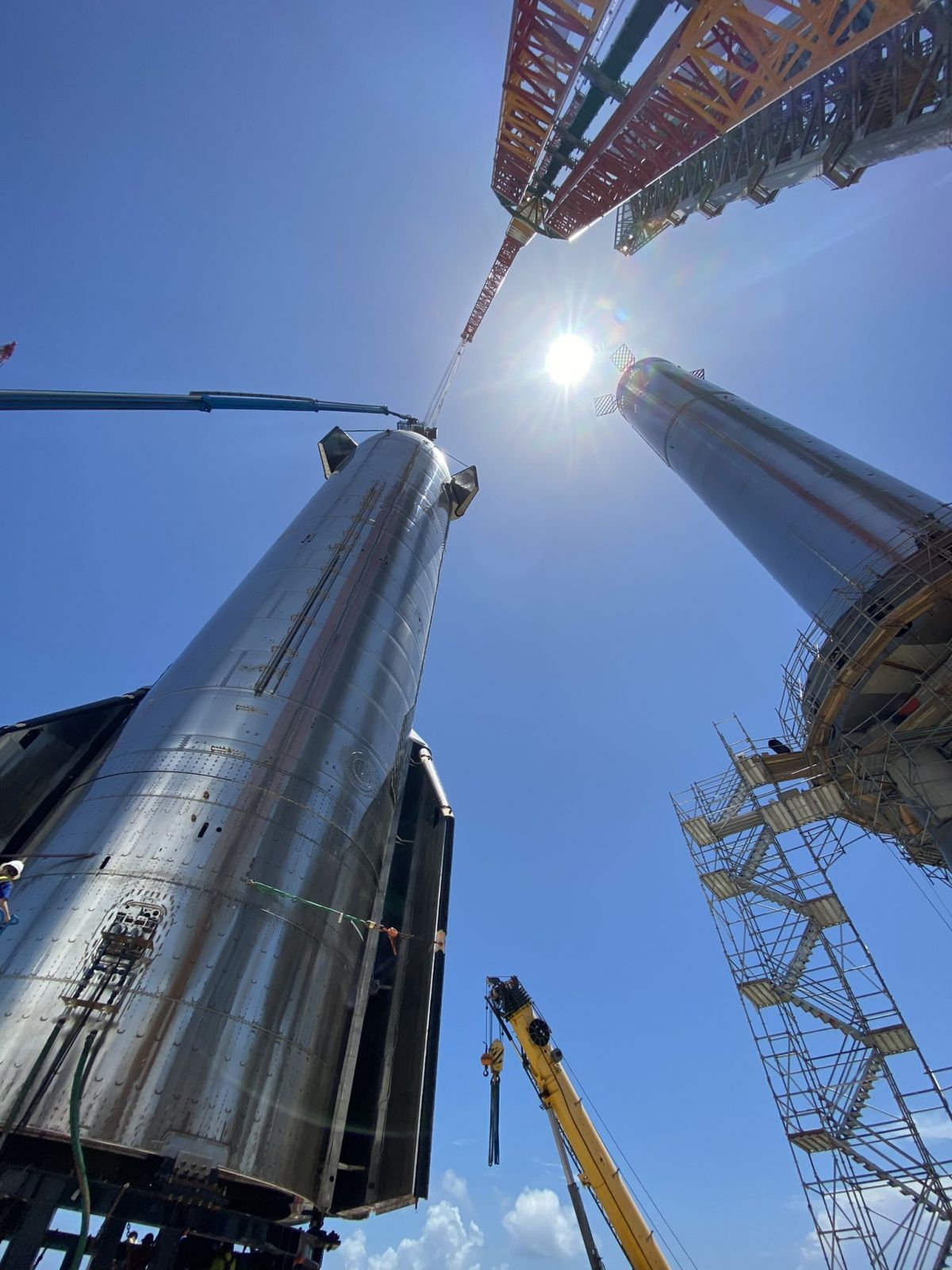 Ship 20 waits next to Booster 4 to be lifted. Credit: SpaceX 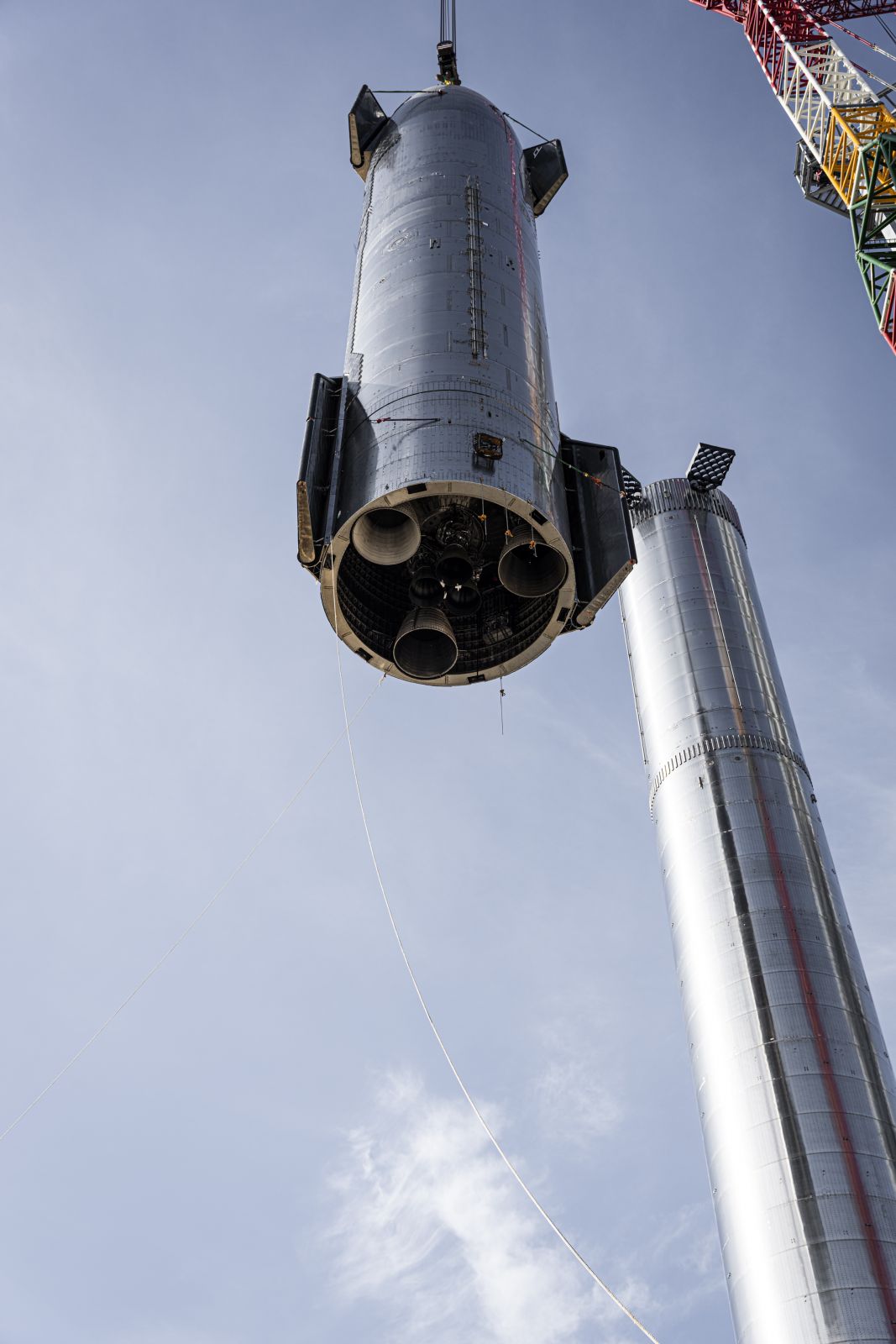 Ship 20 is hoisted up toward the top of Booster 4. Credit: SpaceX 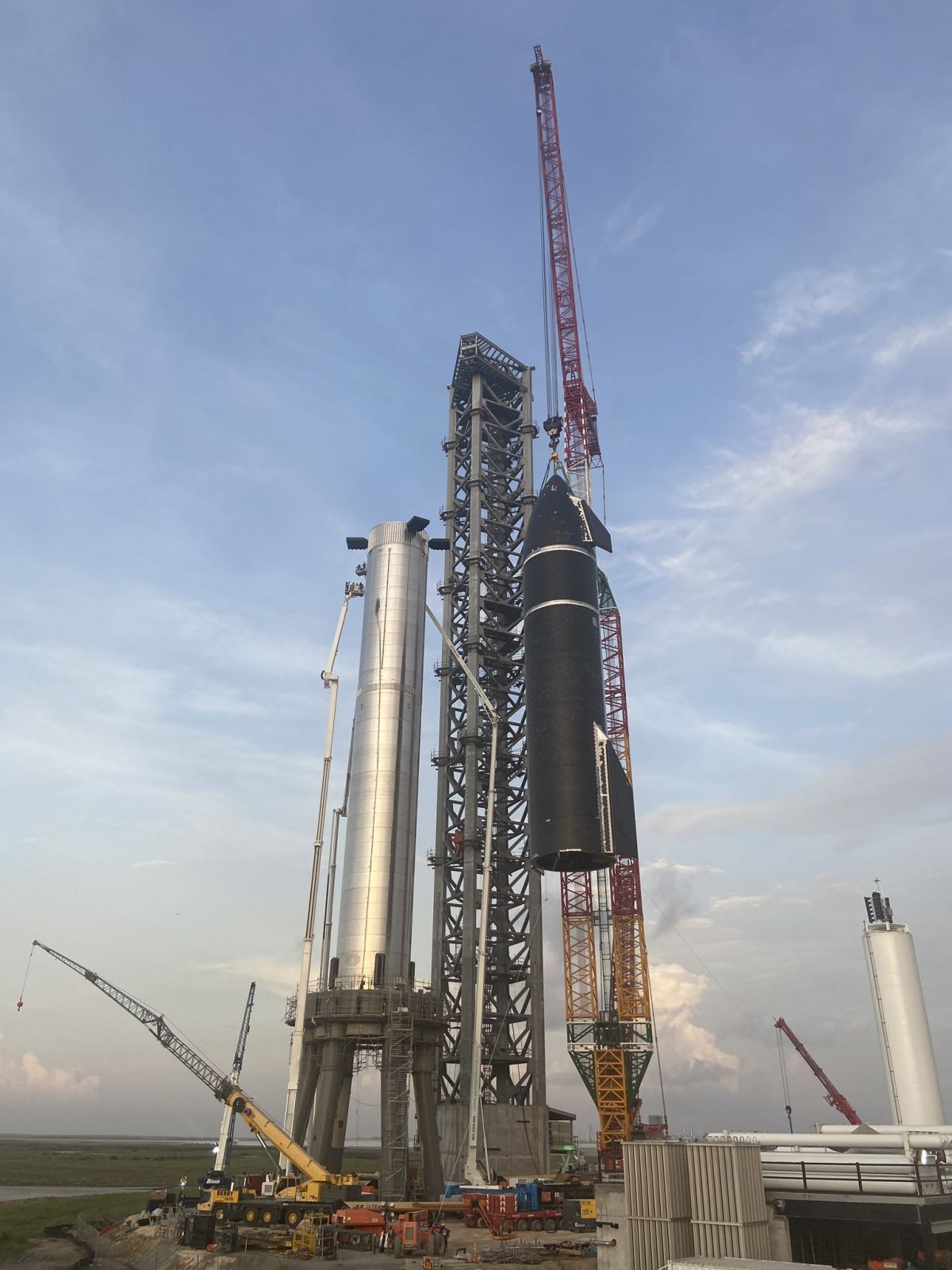 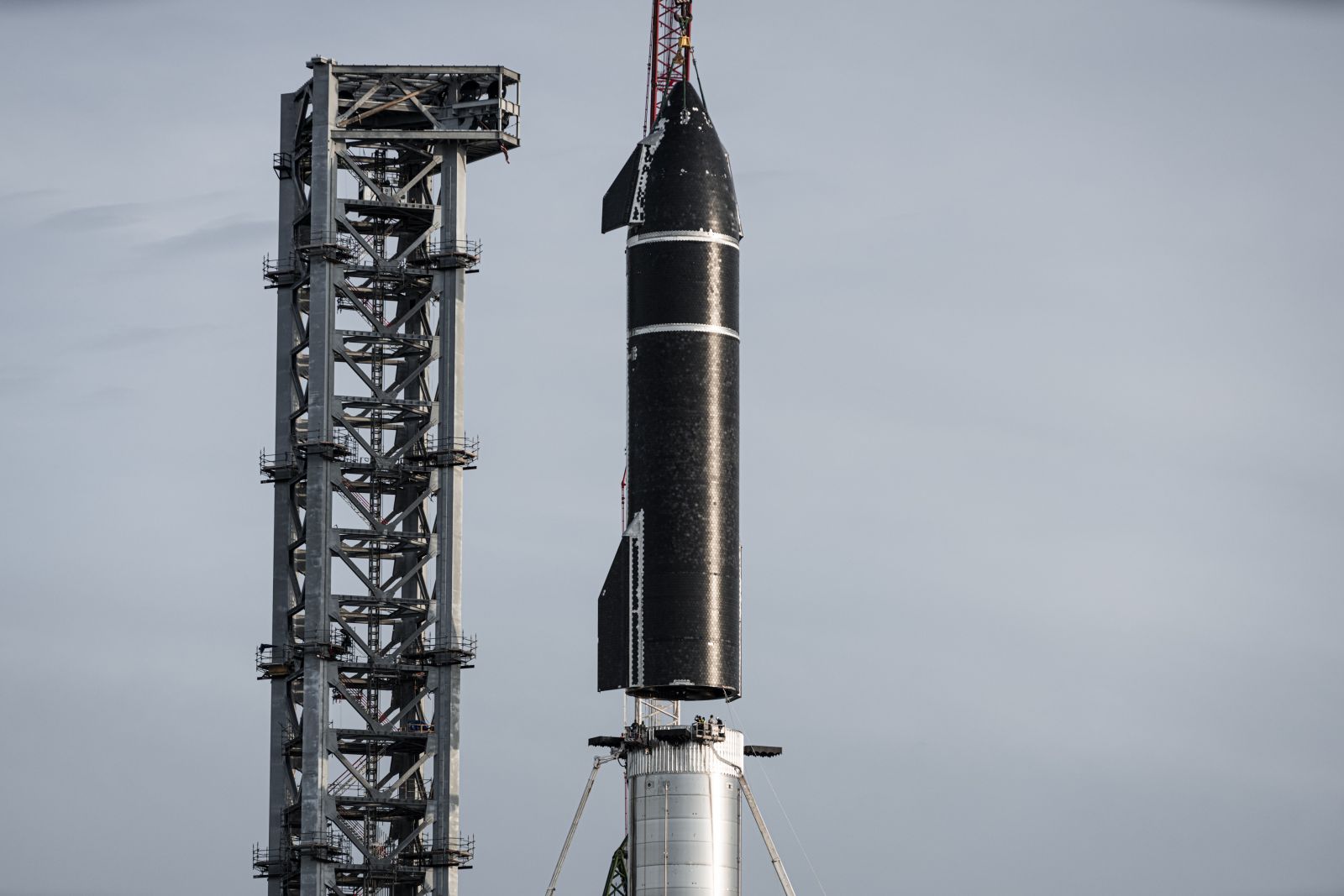 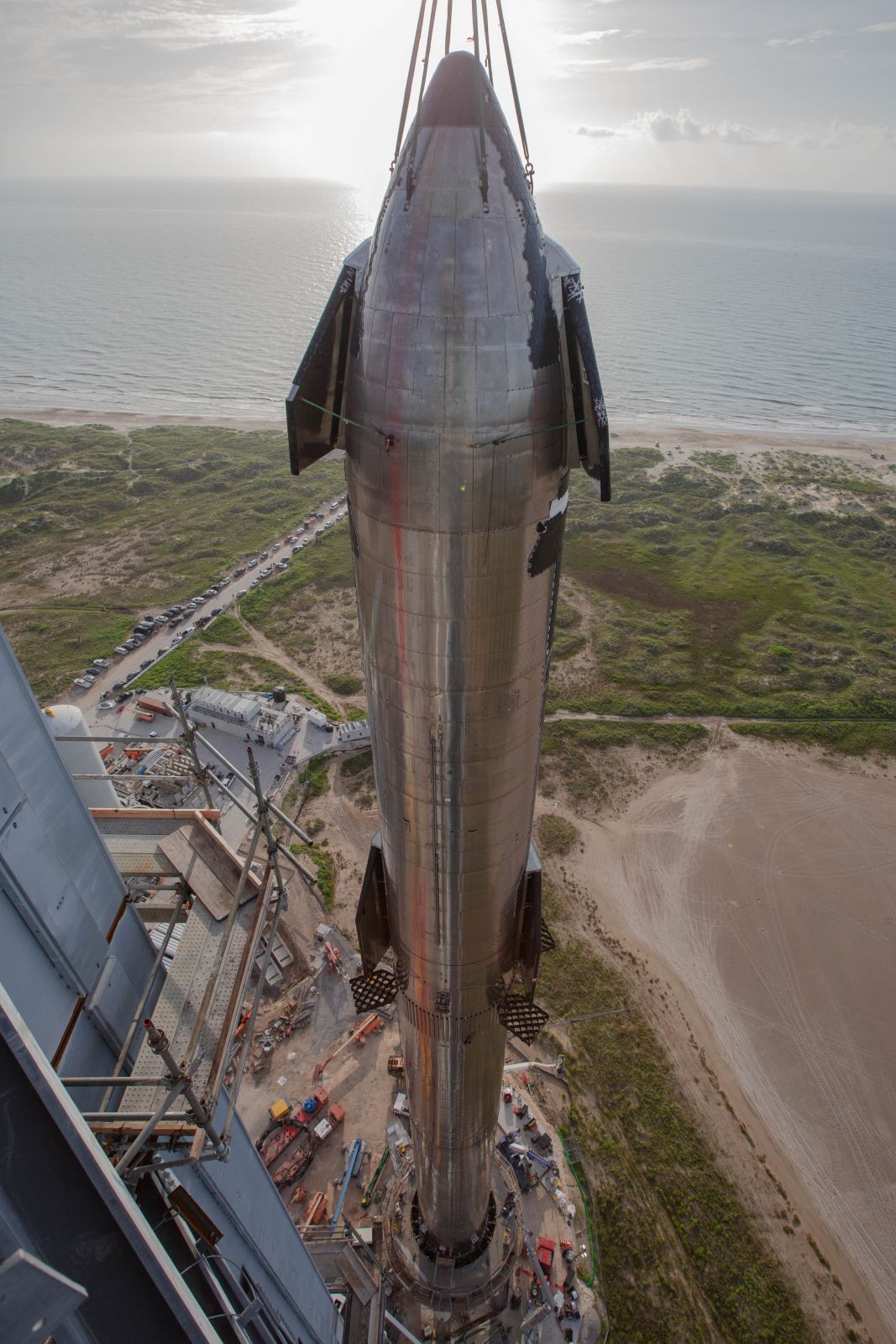