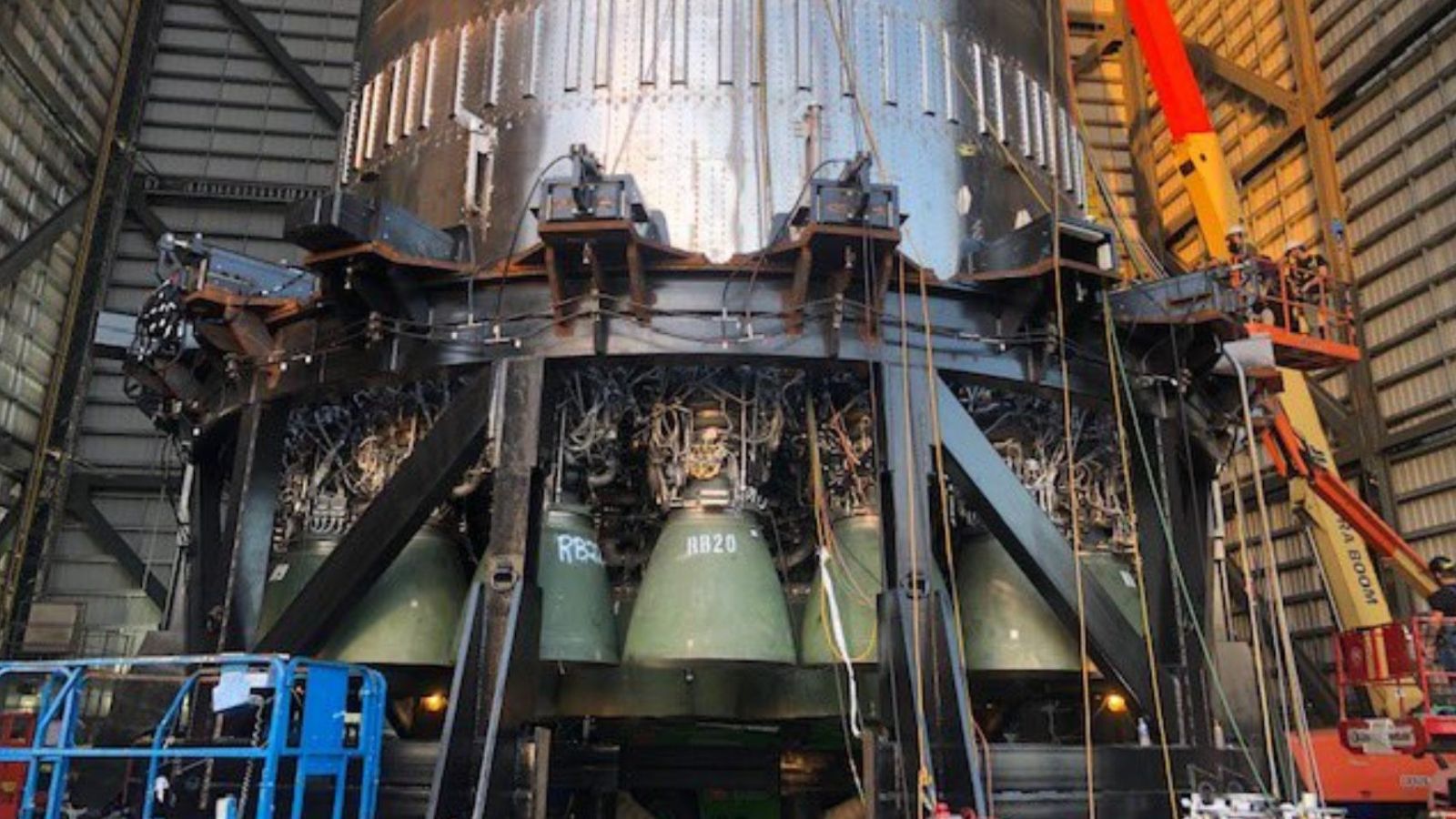 A view from early August of all 29 Raptor engines installed at the base of Starship Super Heavy Booster 4 while in SpaceX’s High Bay. Credit: Elon Musk / SpaceX

Both Starship Booster 4 and Ship 20 are back at the launch site at SpaceX’s Starbase in South Texas about a month after the pair’s brief first stacking.

While Ship 20 has been there for a while, Booster 4 was rolled to the launch site Sept. 7, 2021, after being inside the High Bay several miles down the road at the build facility for the last several weeks.

The last time both Booster 4 and Ship 20 were at the launch site together was in early August when the two were stacked for fit checks. While it’s unclear when the next time the two vehicles will be stacked, the near-term expectation is for Booster 4 to undergo cryogenic proofing and possibly static fire testing. Exactly when those are slated to occur, however, is unknown.

More progress continues at the launch site including Raptor installations for Ship 20, thermal protection system upgrades, and GSE-7 rolling to the test site.

Ship 20 has been the subject of recent updates and upgrades in the last few weeks. On Sunday, a Raptor engine was spotted being staged and prepared for installation on Ship 20.

Ship 20 also received maintenance on its thermal protective system. Some of the tiles had been marked in various colors of tape representing the condition each particular condition was in. This week, however, technicians were spotted doing maintenance and replacement work on the tiles, seemingly upgrading and preparing the system for its first orbital launch.

On the other side of the property at the ground support equipment tank farm, GSE-7 was moved into position, presumably in preparation of upcoming pressure testing. The GSE will house liquid nitrogen for an upcoming orbital Starship booster.

Starship is the largest rocket ever constructed by humanity. This is its 70 meter tall Super Heavy booster rolling down the road for orbital flight testing… humans for scale #Starship pic.twitter.com/XusEeBn86B

This is epic. Super Heavy booster 4 rolling to the pad to begin the first ever starship orbital test flight campaign. #Starship pic.twitter.com/p7tBy3sBiq