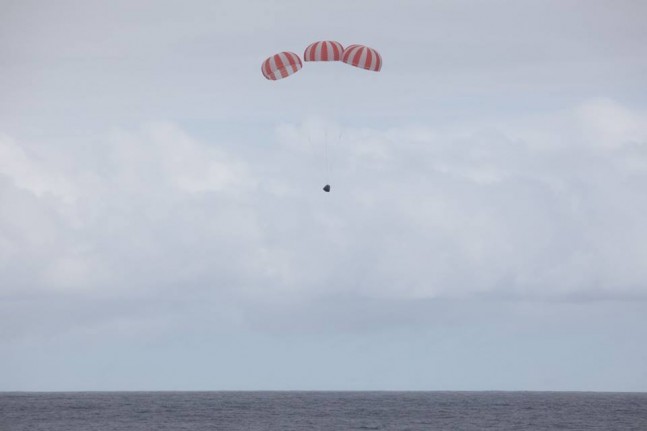 SpaceX's Dragon spacecraft can be seen here drifting down to the Pacific Ocean where it splashed down at 3:39 p.m. EDT. Photo Credit: SpaceX

The Expedition 40 crew said goodbye to  a fellow space traveler with the departure of Space Exploration Technologies (SpaceX )Dragon cargo vessel which arrived at the space station on Saturday, Oct. 25. After being instructed to carry out a burn, the spacecraft and its new payload of used experiments and equipment splashed down off an estimated 300 miles west of Baja, California at 3:39 p.m. EDT (1939 GMT).

Dragon carried an estimated 3,276 lbs (1,486 kg) cargo and science samples which will be returned to NASA. Dragon is a unique asset as it is the only spacecraft that currently travels to the International Space Station that is capable of returning an appreciable amount of cargo to Earth. “This mission enabled research critical to achieving NASA’s goal of long-duration human spaceflight in deep space,” said Sam Scimemi, director of the International Space Station division at NASA Headquarters. “The delivery of the ISS RapidScatterometer advances our understanding of Earth science, and the 3-D printer will enable a critical technology demonstration. Investigations in the returned cargo could aid in the development of more efficient solar cells and semiconductor-based electronics, the development of plants better suited for space, and improvements in sustainable agriculture.”

Dragon will now be transported via boat to a port located near Los Angeles. From there, some of the cargo will be offloaded and returned to NASA within 48 hours. Dragon itself will be ferried back to SpaceX’s McGregor, Texas test facility for processing. Some of the scientific experiments are time sensitive, especially in terms of the Rodent Research-1 experiment. This study will review the impacts of the micro-gravity environment on animals, in this case – mice. It is hoped that information gleaned from this experiment can be relayed to human space exploration efforts as well as the health of individuals back on Earth.

The Center for the Advancement of Science in Space (CASIS ), an organization funded by the U.S. government which manages experiments on the International Space Station in conjunction with NASA. Both organizations are developing experiments which will use the Rodent Research Hardware System.

The Dragon which splashed down today was launched from Cape Canaveral Air Force Station’s Space Launch Complex 40 (SLC-40) in Florida on Sept. 21. Onboard was almost 5,000 lbs (2,268 kg) worth of experiments, cargo and crew supplies. The equipment on the spacecraft supported some 255 scientific investigations that are currently or planned to be carried out by the Expedition 41 and 42 crews on the orbiting laboratory. Other experiments on Dragon include the following:

The Fundamental and Applied Studies of Emulsion Stability (FASES) investigation will be processed to help determine the physical principles which play a part in stabilizing different emulsions and the compounds that influenced those emulsions while in orbit. Emulsions are mixtures of two or more liquids where one liquid is present in droplet form and distributed throughout the other liquid; common emulsions include milk, mayonnaise and paint.

NanoRacks-Girl Scouts of Hawai’i-Arugula Plant Growth study was returned to Earth, as well. This study seeks to determine the impact that various nutrients and microgravity have on the growth and nutritious value of arugula seedlings grown in space. The goal of the study is to develop better ways to grow plants with a high nutritional content in the space environment. If the study samples have a high nutrition value, this may enable NASA and astronauts to grow and consume fresh, healthy food during future space travel.

Under the Commercial Resupply Services (CRS) contract, SpaceX is tasked with conducting 12 resupply flights to the ISS by 2016. NASA is negotiating with both SpaceX and the other commercial partner working on the CRS contract, Dulles, Virginia-based Orbital Sciences Corporation – to extend the first phase of the contract for an additional year.

the three parachutes remember (a bit) the Apollo reentries