SpaceX racks up first launch of the year with Thaicom 6 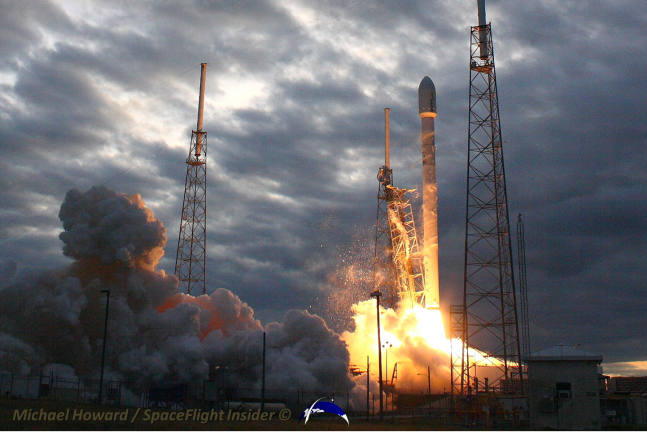 CAPE CANAVERAL, Fla — Hawthorne, California-based Space Exploration Technologies (SpaceX) set off a firework of their own just five days after the start of the New Year. Carrying the Thaicom 6 satellite to a geostationary orbit, the company launched a Falcon 9 rocket in the v1.1 configuration from Cape Canaveral Air Force Station’s Space Launch Complex 40 (SLC-40) in Florida at 5:06 p.m. EST at the opening of the launch window. Despite some concerns that an encroaching cold front might hamper the launch from proceeding, the weather was a no issue and launch took place right on time at the opening of the window. Photo Credit: John Studwell / SpaceFlight Insider

This was the first launch from the United States this year and it was only the third for this new version of the Falcon 9. The F9 v1.1 features larger fuel tanks, improved avionics and its Merlin 1D engines are arranged in what is known as an “octaweb” pattern.

According to a report appearing on SpaceFlight Now – the launch window will remain open for 86 minutes. SpaceX has in the past repeatedly attempted to launch during the opening of the window in the past, only to see an issue crop up that prevented it. The company has acquired a reputation by working through a problem, and getting the rocket off the pad.

This was the second mission in just over a month that has been sent aloft by the Falcon 9 v1.1 and the third carried out by the v1.1 configuration of the launch vehicle overall. Thaicom 6 had been slated to launch late last year, but SpaceX was forced to push the launch date back.

The Merlin family of rocket engines uses RP-1 (a highly-refined form of kerosene) and liquid oxygen as propellant. The Merlin was originally designed to be reused. So far the company has not been able to accomplish this feat.

SpaceX tweeted at approximately 6:33 p.m. EST that the Thaicom 6 spacecraft had been successfully deployed into its target orbit.

Thaicom 6 is a television communications satellite which will be managed by the Thaicom Public Company Limited. Much like last month’s launch of the SES-8 spacecraft, Thaicom 6 will be what is known as “co-located” in the same orbital area as another satellite – Thaicom 5. This is 78.5 degrees East, known as the “Hot Bird” position. SpaceX has a busy launch manifest slated for this year with some 10 missions for a wide range of customers. Photo Credit: Jason Rhian / SpaceFlight Insider

Also like SES-8, Thaicom 6 will be placed into a geostationary orbit. It will be the second satellite placed into such an orbit by the Falcon 9 v1.1 launch vehicle.

The Thaicom 6 spacecraft was built by Dulles, Virginia-based Orbital Sciences Corporation, which produced the spacecraft at an estimated cost of approximately $160 million. Another Orbital offering, the Cygnus spacecraft (dubbed the C. Gordon Fullerton) is scheduled to launch on Wednesday, January 8 from NASA’s Wallops Flight Facility in Virginia. In terms of the spacecraft which rode fire atop the F9 v1.1, its mission won’t be to deliver cargo to the International Space Station as Cygnus will, rather it will provide a much different service to various parts of the world. Thaicom 6 is described as being a three-axis stabilized satellite and it contains 18 active transponders which operate in the C-band, as well as eight Ku-band transponders. Thaicom 6 is tasked with providing communications services to Asia, Africa, Australia, Europe and predominantly DTH (direct-to-home) service to Thailand.

Tonight’s launch had been scheduled to take place on Jan. 3, however, minor issues with the rocket’s fairing caused the launch to slip to this evening.

This marks the eighth launch for the highly-successful Falcon 9 overall. Seven have now launched from Cape Canaveral, and one, so far, has taken to the skies from Vandenberg Air Force Base in California. SpaceX has also taken control of NASA’s historic Launch Complex 39A, the site which saw many iconic manned missions launch from – including humanity’s first manned journey to the surface of the Moon – Apollo 11.

“Today’s successful launch of the THAICOM 6 satellite marks the eighth successful flight in a row for Falcon 9,” said Gwynne Shotwell, President of SpaceX. “SpaceX greatly appreciates THAICOM’s support throughout this campaign and we look forward to a busy launch schedule in 2014.”

SpaceX has some 10 missions on the 2014 launch manifest. These include missions to the International Space Station under NASA’s Commercial Resupply Services as well as commercial payloads similar to those conducted for Thaicom Public Company Limited. According to SpaceFlight Now, tonight’s launch marks the fastest turnaround of a pad since the launch of two Delta II rockets from Cape Canaveral’s Space Launch Complex 17 in 1999.