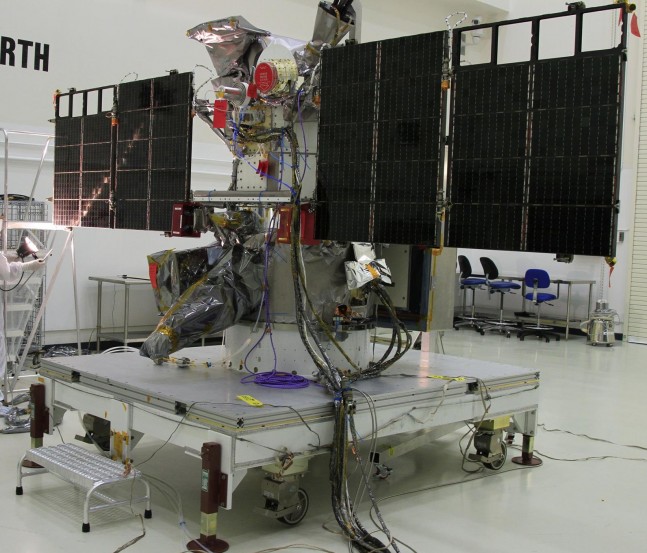 A Falcon 9 v1.1 is set to launch the DSCOVR mission on its journey to an L1 orbital postion. Photo Credit: Kim Shiflett / NASA

CAPE CANAVERAL, Fla — California-based Space Exploration Technologies (SpaceX ) has a Falcon 9 v 1.1 prepped and ready for flight. The payload for the planned Feb. 8 launch is NASA and NOAA’s Deep Space Climate Observatory (DSCOVR ) mission. If everything goes according to plan, DSCOVR will take to the skies from Cape Canaveral Air Force Station’s Space Launch Complex 40 (SLC-40) in Florida at 6:10 p.m. EST (2110 GMT). Tomorrow’s flight will mark the second launch of the year for SpaceX – which has some 18 launches on the manifest for 2015.

DSCOVR will maintain the nation’s solar wind observations, which are critical to maintaining the accuracy and lead time of NOAA’s space weather alerts and forecasts. DSCOVR is a partnership between the National Oceanic and Atmospheric Administration (NOAA), NASA and the U.S. Air Force (USAF). Hans Koenigsmann of SpaceX and Mike McAlaneen from the 45th Weather Squadron discuss the health of the launch vehicle and weather conditions ahead of the DSCOVR launch. Photo Credit: Jared Haworth/Spaceflight Insider

DSCOVR will succeed NASA’s Advanced Composition Explorer (ACE). ACE is the only current satellite providing real-time solar wind observations from the Lagrangian point 1 (L1) orbit, approximately 1 million miles away from Earth, and it is well past its design life. NOAA and its partners have worked to keep the development of DSCOVR on schedule in order to continue these critical observations.

DSCOVR (formerly known as Triana) was originally conceived in the late 1990s as a NASA Earth science mission that would provide a near continuous view of Earth and measure Earth’s complete albedo. Before the mission was cancelled, Triana was scheduled to fly on the ill-fated STS-107 flight of Columbia. The mission was canceled and the satellite was put into storage in 2001. NOAA and the USAF had DSCOVR removed from storage and tested in 2008, and the same year the Committee on Space Environmental Sensor Mitigation Options (CSESMO) determined that DSCOVR was the optimal solution for meeting NOAA and USAF space weather requirements. Solar wind observations are the only data source to support 15 to 60 minute lead time for geomagnetic storm warnings. Without timely and accurate alerts and warnings, space weather has demonstrated the potential to disrupt virtually every major public infrastructure system, including transportation systems, power grids, telecommunications and GPS. NOAA will provide these critical services by supplying geomagnetic storm warnings to support key industries such as the commercial airline, electric power and GPS industries.

Our national security and economic well-being, which depend on advanced technologies, are at significant risk without accurate advanced warnings of impending geomagnetic storms. Aircraft that fly polar routes now include space weather as an integral part of pilots’ weather pre-briefs, which provide the current status of the flight environment including potential impacts to critical communication and navigation systems, and the potential for hazardous solar radiation exposure. The Nation’s advanced technology service providers will be looking to NOAA for the alerts, watches and warnings needed to protect lives and livelihood and to ensure continuity of critical operations.

DSCOVR was originally built in the 1990’s and was kept in storage at the NASA Goddard Space Flight Center until 2008 when it was removed for testing and subsequent refurbishment. DSCOVR will weigh approximately 1653 pounds (750kg) at launch and has dimensions of 54 inches by 72 inches. Also on board is the National Institute of Standards and Technology Advanced Radiometer (NISTAR), designed to measure whole absolute irradiance integrated over the sunlit face of Earth for climate science applications. If Earth is keeping in more solar energy than it expels, then the Earth will warm. If the Earth and the Earth-system radiates more energy to space than it receives from the sun, the Earth will cool. When absorbed sunlight and emitted heat balance each other, the Earth’s temperature doesn’t change – the radiation budget is in balance.

The Earth Polychromatic Imaging Camera (EPIC ) will be responsible for providing images of the sunlit side of Earth for science applications such as ozone, aerosols and clouds. EPIC will generate a full disk image of the Earth in one picture, something that hasn’t been done before from a satellite. Normally, Earth images are pieced together from satellites 22,300 miles above Earth. As DSCOVR flies 1 million miles from Earth, it can create a single image of the entire sunlit side of the Earth.

NOAA had planned to contract with the Naval Research Laboratory to build a coronal mass ejection (CME) imager (named compact coronagraph [CCOR]) for integration onto DSCOVR. However, because of a lack of timely funding in FY 2011, it was not possible for CME CCOR to be included in the DSCOVR mission. DSCOVR satellite prior to being tucked away in the payload fairing. Photo Credit: Kim Shiflett / NASA

In consultation with the NOAA Space Weather Prediction Center, NOAA decided it was more important to have PlasMag space weather capabilities (for solar wind observations) on orbit in 2015 than to delay the launch of DSCOVR to integrate the CME CCOR.

The mission life is expected to be five years, with a total lifecycle cost to NOAA of $104 Million and $236 million to the other partners.

NOAA will operate DSCOVR from its NOAA Satellite Operations Facility in Suitland, Maryland and distribute the data to its users and partner agencies. NOAA will process the space weather data, providing products and forecasts through the NOAA Space Weather Prediction Center in Boulder, Colorado, and archive the data at the NOAA National Geophysical Data Center in Boulder, Colorado. NASA is responsible for processing the Earth sensor data.

NOAA is responsible for the DSCOVR mission, providing program management, operating the spacecraft and distributing all mission data. NOAA is funding NASA to refurbish the spacecraft and space weather sensors and to provide technical  management of the space segment. NASA is funding the refurbishment of the Earth science instruments and supports the analysis of their data. The USAF will provide the launch vehicle through their launch services contract with SpaceX. It will take DSCOVR 115 days to reach L1 orbit. During that time, ACE will continue to provide information on solar weather. Launched Aug. 25, 1997, ACE originally had a planned mission life of five years. It is still in operation with enough fuel to maintain its orbit until 2024. It  will remain operational as a backup to DSCOVR.

The mission will also have a secondary objective as SpaceX will make a second attempt at landing the Falcon’s first stage on its autonomous spaceport drone ship (ASDS). Dubbed “Just Read the Instructions”, the ASDS will be approximately 370 miles downrange off the coast of Jacksonville for this attempt. During the last attempt, the rocket’s first stage experienced a “rapid unscheduled disassembly” as it crashed into the ASDS upon landing.

In order to improve the chances of a successful landing, SpaceX has 50 percent more hydraulic fluid used to control the grid fins. The fins were added to the vehicle’s first stage in an effort to provide steering and directional control of the booster’s first stage. Due to the high velocity of re-entry, thrusters would not be able to slow the first stage enough to land on the ASDS intact.

I believe it was 50% more hydraulic fuel, not doubled…. and intact.. sorry for the nitpicking, and thanks for the article!

Am I right in thinking that the Falcon 9 is providing the DSCOVR with almost escape velocity, yet still retaining enough fuel for the first stage landing attempt? The DSCOVR Itself only seems to have small thrusters.

Bit surprised that DSCVOR has no coronagraph. If the 20 year-old SOHO was to malfunction then our world would literally have no advance warning of a rather large incoming CME. Yes, there are ground-based telescopes but SOHO’S Large Angle and Spectrometric Coronagraph has produced mesmorizing imagery which will be difficult to match.