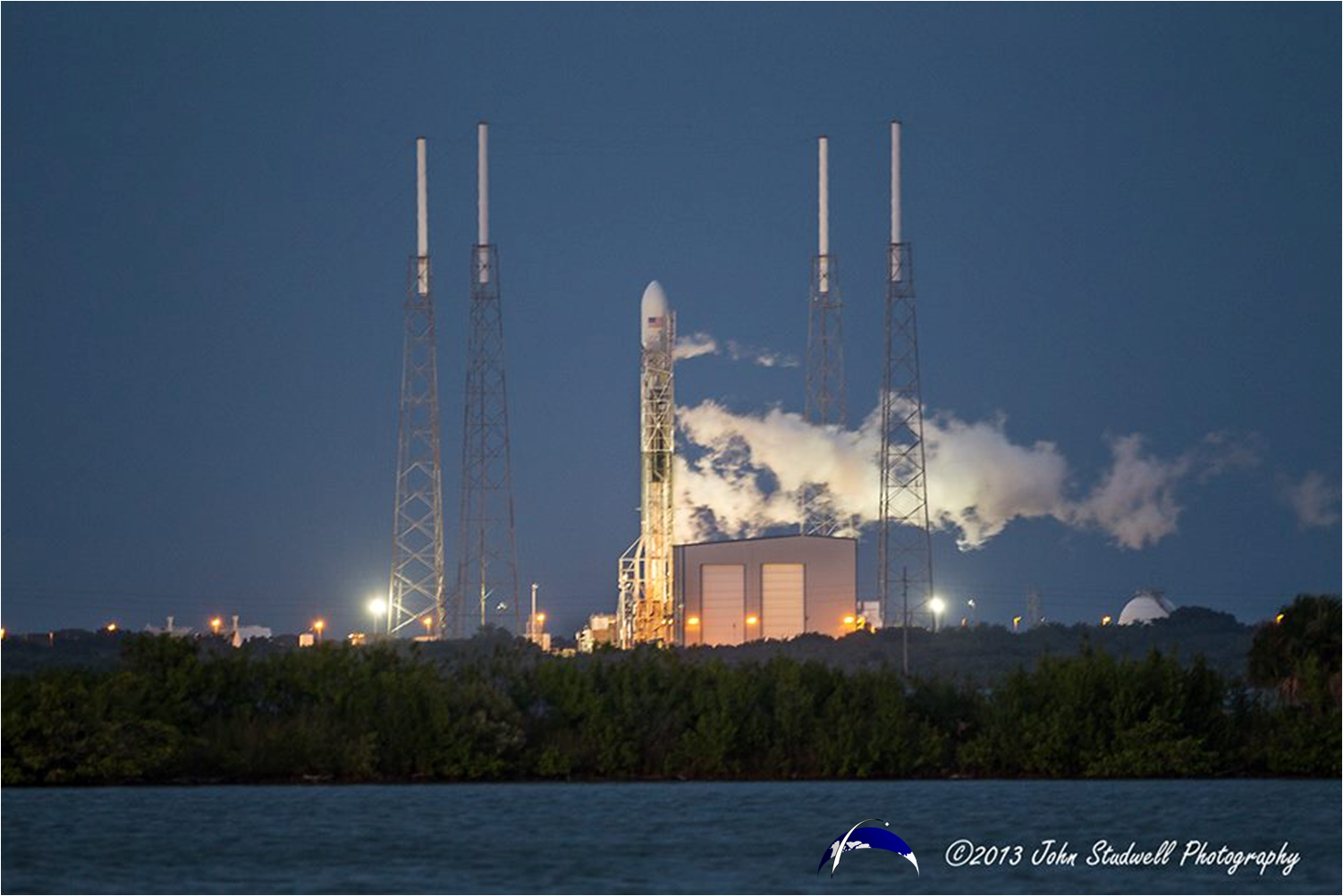 CAPE CANAVERAL, Fla – Hawthorne, Calif., based Space Exploration Technologies (SpaceX) is  preparing for the first flight of the Falcon 9 v1.1 rocket from the Cape’s Space Launch Complex 41 in Florida. Liftoff is currently set to take place on Monday, Dec. 2. The exact time of when the launch window will open has yet to be announced. This follows two other launch attempts on Nov. 25 and Nov. 28. This will be the second launch of this variant of the Falcon 9, marking the first time it has been launched from Florida. Monday’s launch will only be the second for this iteration of the Falcon 9. Photo Credit: USAF

The Falcon 9 v1.1 first roared to orbit from Vandenberg Air Force Base’s Space Launch Complex 4 in California with the CASSIOPE (CAscade, SmallSat and IOnospheric Polar Explorer) spacecraft on September 29, 2013. This marked the first non-NASA payload for SpaceX’s Falcon 9. The customer was MacDonald Detwiller and Associates.

The CASSIOPE mission had a number of other “firsts” as well: the first F9 to launch from Vandenberg, the first of this configuration of the launch vehicle and the first in which the media was not hosted by the launch service provider.

The F9 v1.1, according to a release issued by the U.S. Air Force, has upgraded Merlin 1D engines, stretched fuel tanks, and a payload fairing. SpaceX’s Falcon 9 rocket has been very successful with no major problems cropping up during the rocket’s six flights. Photo Credit: SpaceX

The first launch of the F9 v1.1 was not all that SpaceX might have hoped it would be, as the second stage’s engine failed to re-ignite. SpaceX has stated that the failure was due to cold conditions. According to a report on SpaceFlight Now, the company stated that frozen fuels lines were to blame for the issue.

The failure of the F9 v1.1’s upper stage occurred despite extreme efforts by SpaceX to have the flight be perfect.

“We’re being, as usual, extremely paranoid about the launch and trying to do everything we possibly can to improve the probability of success, but this is a new version of Falcon 9,” Musk stated in a Space News report.

Perhaps at least somewhat due to the issues with the first launch of F9 v1.1, the launch of SES-8 has slipped at least six times.

SES-8 will be a geostationary communications satellite that is operated by the Dutch firm, SES World Skies. If all goes according to plan, the 7,055-pound spacecraft will be the first spacecraft that SpaceX places into a geostationary orbit.

Initially, Falcon 9 will place the SES-8 spacecraft will be sent into what is known as a “super synchronous transfer orbit” which will go beyond the planned operating orbit, which is approximately 22,000 miles in altitude. This requires the F9’s second stage to conduct two burns. The first of these will place SES-8 into a low-altitude “parking” orbit. The second will place the satellite into an elliptical orbit.

With the Falcon 9’s job done, it will then be up to SES-8 to place itself into a circular orbit that should be approximately 22,300 miles above Earth’s equator. It will then slip into a geostationary arc at 95 degrees east longitude, according to the U.S. Air Force’s 45th Space Wing. The SES-8 spacecraft was built by Dules, Va., based Orbital Sciences Corporation on a GEOStar satellite bus. It is the sixth satellite based on this design. Estimates place the cost that SES paid for launch services at less than $60 million.

SES-8 has up to 33 Ku-band transponders (36 MHz equivalent). It will share its spot in the sky with NSS-6 and will help provide growth capacity for points in Asia and the Pacific. South-Asia and Indo-China communications markets are experiencing explosive growth and the need for SES-8’s high-performance communications array is great. SES-8 will also expand DTH and VSAT capabilities and has other applications as well.

SpaceX had as many three more launches planned for the remainder of 2013, however all but one of those, Thiacomm 6, has been pushed back to 2014. The next SpaceX will conduct on behalf of NASA is the Commercial Resupply Services 3 flight, currently slated to take place Feb. 22, 2013.

The initial post of this article stated that the second stage: “failed to ignite.” This was meant to say “re-ignite.” SpaceFlight Insider apologizes for any confusion this might have caused.

The post states “The first launch of the F9 v1.1 was not all that SpaceX might have hoped it would be, as the second stage’s engine failed to ignite.”

This should be “failed to RE-ignite for a test burn after the CASSIOPE satellite had separated.”

That is, it ignited successfully to put CASSIOPE in the intended orbit, but then failed to restart, as it will have to do for SES-8.

“Perhaps at least somewhat due to the issues with the first launch of F9 v1.1, the launch of SES-8 has slipped at least six times.”

This has a double meaning, and both are applicable. Both the investigation of why the second stage did not relight, and the first launch of F9 v1.1 at CCAFS and thus new launch site hardware, are factors in the delay.

This story is interesting, but it fails to address/speculate about what caused the thrust anomaly during Thursday’s launch attempt and its potential impact on future launches.

Hi Mark,
We typically don’t speculate as to the cause of issues (because without accurate information any speculation would just be an educated guess).
SpaceX has not issued a lot of detail about the various delays. As soon as we have concrete info, we’ll try to pass it along.
Sincerely and with thanks, Jason Rhian – Editor, The SpaceFlight Group

Got a note from SpaceX saying that the cause of the abort was “Oxygen in the ignition fluid on the ground side.” Apparently this has been remedied and they expect to launch Monday pm.

Mark,
It looks like SpaceX will try again at 5:41 p.m. EST. We’ll be there. Thanks for the details.
Sincerely, Jason Rhian – Editor, The SpaceFlight Group