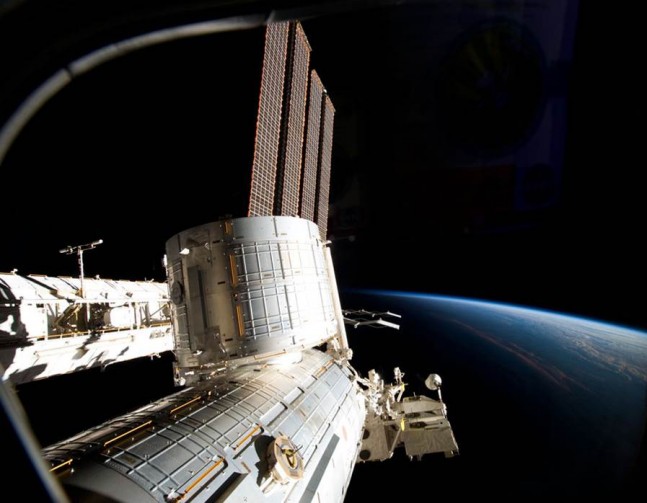 Expedition 38 astronauts aboard the International Space Station (ISS) successfully preformed the first in a series of extra-vehicular activities(EVAs) to replace a faulty ammonia pump on Saturday, December 21. This was the first of three spacewalks scheduled to fix a coolant loop issue which cropped up earlier this month on December 11.

Spacewalk veteran Rick Mastracchio was joined by spacewalk rookie Mike Hopkins in successfully disconnecting the large ammonia pump assembly around four and a half hours into the spacewalk with much greater ease than was originally anticipated, though the spacewalk ended earlier than planned.

USAToday has reported that Mastracchio: “…benefited from lessons learned in 2010 when [Douglas] Wheelock and Tracy Caldwell Dyson struggled to disconnect the pump module’s four coolant hoses and dealt with leaks of ammonia.”

This time, only a few ammonia ‘snowflakes’ squirted out, causing no concern that contaminated spacesuits would track the highly-toxic substance back inside the station and endanger the six-person crew, which also includes three Russian cosmonauts and a Japanese astronaut.” Following the disconnection of the ammonia pump assembly, ground personnel told Mastracchio that they had a list of other tasks they would like the crew to perform as ‘get ahead’ items and asked for his input.  He replied that his vote was to end the spacewalk at that point.  Earlier he had complained that his feet were cold (astronauts have received injuries from the cold temperatures during EVAs and training in the past) and ground personnel asked about his temperature, suggesting that might be the reason for his decision to call an early end to the scheduled 6.5 hour spacewalk.   Mastracchio replied that there were: “a couple of things” involved in his decision and ground personnel soon agreed that it was time to call it a day.   The spacewalkers returned to the airlock and the spacewalk ended after 5 hours and 28 minutes,” according to a report appearing on SpacePolicyOnline.

Since the faulty pump was removed far ahead of schedule, a third spacewalk which had been slated to take place on Christmas Day – may no longer be necessary. It will depend on how smoothly the installation of the new pump proceeds during the next spacewalk, which has now been pushed back a day because of concern for Mastracchio’s spacesuit. This second spacewalk, now scheduled on Tuesday, December 24, will focus on the remainder of tasks to remedy the coolant issue aboard the space station.

A NASA release stated that: “…the extra day will allow time for the crew to resize a spare spacesuit on the space station for use by Mastracchio. During repressurization of the station’s airlock following the spacewalk, a spacesuit configuration issue put the suit Mastracchio was wearing in question for the next excursion—specifically whether water entered into the suit’s sublimator inside the airlock. The flight control team at NASA’s Johnson Space Center located in Houston, Texas decided to switch to a backup suit for the next spacewalk.”

NASA also assured that: “this issue is not related to the spacesuit water leak that was seen during a July spacewalk by European Space Agency (ESA) astronaut Luca Parmitano and NASA’s Chris Cassidy. Both Mastracchio and Hopkins reported dry conditions repeatedly throughout Saturday’s activities and the two were never in danger.”

Tuesday’s spacewalk is scheduled to begin at 7:10 a.m. EST and slated to be approximately six and a half hours long.