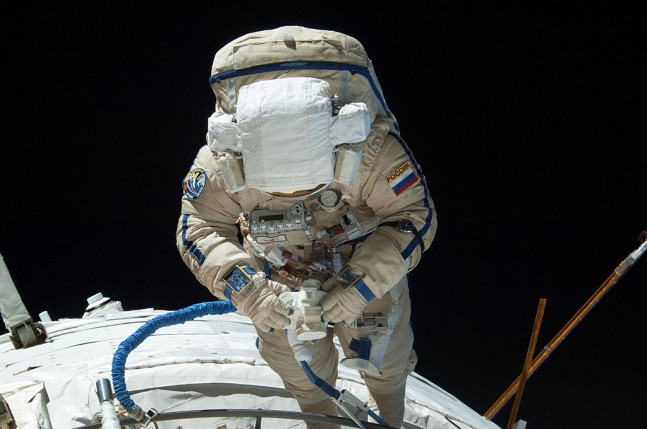 A cosmonaut inspecting his work as he moves around the Zvezda module during spacewalk #35, on August 22, 2013. Photo Credit: CNW Group/UrtheCast Corp

Only a few days after the final spacewalk to fix a faulty coolant pump, Expedition 38 cosmonauts completed another spacewalk to install photographic equipment on December 27. The spacewalk, kicked off by the duo opening the hatch of the Russian Pirs airlock at 8 a.m. EST, lasted 8 hours and 7 minutes wrapping up at 4:09 p.m. EST.

The extra-vehicular activity (EVA) was unrelated to the previous spacewalks earlier in the week regarding a coolant pump issue aboard the International Space Station (ISS). The spacewalk’s goal was to install two high-fidelity cameras (one medium-resolution still camera and one high-definition video camera) as part of a Canadian video-streaming venture hoping to down-link imagery of the Earth.

According to a CBS article about the EVA: “Based in Vancouver, UrtheCast (pronounced Earth Cast) says anyone with internet access will be able to download imagery of selected targets using cell phones, tablets or personal computers as the space station flies 51.6 degrees to either side of the equator at an altitude of around 260 miles.”

“The medium-resolution camera will provide a fixed view of the ground below while the high-resolution 4K camera will be mounted on a platform that can be aimed at specific targets. The company plans to provide basic imagery free of charge while more specific imaging requests will be billed at yet-to-be-specified rates.” Commander Oleg Kotov and Flight Engineer Sergey Ryazanskiy attached the high-definition video camera to a swiveling platform and the medium-resolution still camera was connected to a spacewalk workstation, which was installed on the Zvezda service module during a previous spacewalk on November 9. Also installed was a foot restraint, which was attached to the workstation.

However, an issue that prevented telemetry from being received on the ground halted the installation’s progress.

According to a NASA press release: “When the flight control team at the Russian Mission Control Center outside Moscow did not see the expected telemetry and electrical connectivity from the medium and high resolution cameras, Kotov and Ryazanskiy were directed to remove the cameras and return them to the airlock for further analysis.  The spacewalkers also were instructed to take detailed photographs of the electrical connectors mated earlier for additional review.” The release also stated: “…in addition to their work with the two cameras, the spacewalkers also removed the Vsplesk experiment package and jettisoned it. Vsplesk, installed during an Expedition 17 spacewalk in July 2008, was designed to monitor seismic effects using high-energy particle streams in the near-Earth environment. Kotov and Ryazanskiy replaced it with hardware for a more sophisticated earthquake-monitoring experiment, Seismoprognoz, which they attached to a Zvezda handrail.”

Kotov and Ryazanskiy were not able to complete other tasks slated for the Friday EVA. These tasks included the jettisoning of a frame that used to hold three Micro-Particles Capturer and Space Environment Exposure Device (MPAC & SEED) units and the installation of a new payload boom.

Despite not finishing the checklist, Friday’s spacewalk marked the longest Russian spacewalk to date, beating the 7 hour, 29 minute excursion on August 16 by Expedition 36 Flight Engineers Fyodor Yurchikhin and Alexander Misurkin.