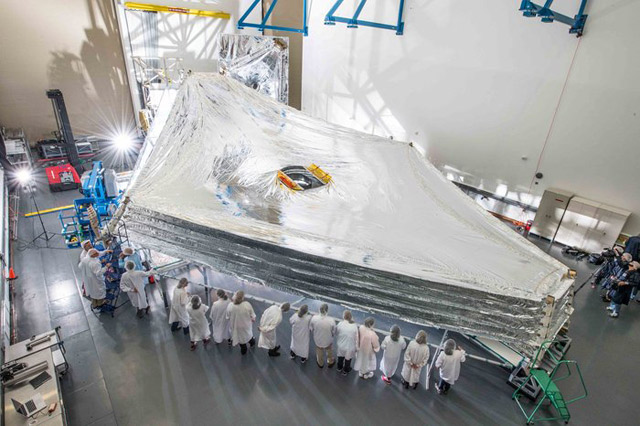 The most visually-striking element of the James Webb Space Telescope (JWST), currently scheduled for launch in four years time, is a giant sunshade, designed to protect the spacecraft’s sensitive science instruments from the Sun’s glare. Shown in this story’s featured image, this vital component is shown during the first complete test of its deployment in a clean room at Northrop Grumman’s facility located in Redondo Beach, California, in early July of this year (2014). Illustration showing both the hot and the cold side of the JWST sun shield. Image Credit: NASA

Unlike its predecessor, the Hubble Space Telescope (HST ), JWST is designed to work mainly in the near-infrared region of the spectrum. Operating at such wavelengths should enable it, among other things, to glimpse some of the first stars in the universe. In so doing, the JWST could vastly expand our understanding of how stars and planets form. It will also serve to capture direct images of exoplanets.

The drawback of being an infrared-based telescope is that its optics, detectors, and science instruments must be kept very cold – around minus 233ºC – a major problem with the Sun’s rays beating down on it 24 hours a day -7 days a week. One solution is to place Webb in a special ‘halo’ orbit around the so-called L2 (second Lagrangian) point, almost a million miles on the other side of the Earth from the Sun. That way the Earth eclipses the Sun part of the time. The rest of the time a sunshade is essential.

So effective is the tennis-court sized shield that protects Webb, that it will let through less than one-millionth of the heat radiation coming from the Sun. But this is no simple parasol. It consists of five layers of special reflecting material – DuPont’s Kapton E, a polymer-based polyimide film – each no thicker than a human hair. When operational in space, the each layer will be separated from its neighbors by the vacuum of space so that hardly any heat conducts from the top to the bottom. Meanwhile heat will be radiated out from between the layers and allowed to escape to the side with the result that only 23 milliwatts of the 300 kilowatts of solar radiation falling on the 22-meter by 10-meter, kite-shaped shield will make it through to Webb’s ‘cold’ side where the Integrated Science Instruments Module is located with its precious cargo of sensitive instrumentation. On the ‘hot’ side, by contrast, the spacecraft’s bus (containing the bulk of the steering and control machinery), solar power array, star trackers, and Earth-pointing antenna, unprotected from the Sun’s warming rays, will be able work as designed at around room temperature.

As well as alleviating the need for any active cooling system, such as that provided by liquid helium on many earlier infrared satellites, Webb’s sunshield will act as a lightshade. Unlike Hubble, which uses a baffle to keep unwanted light from its optics, JWST’s Optical Telescope Element – the 6.5-meter aperture main mirror consisting of 18 hexagonal segments – will rely entirely on the heat shield to stop unwanted solar photons from clouding its vision.

During launch of the new space telescope, the sunshield will be neatly folded within the upper stage fairing of an Ariane 5 launch vehicle. Mission scientists will then hold their breath, once the spacecraft is en route to L2, hoping that the delicate layers of the shield separate and unfurl in the precise configuration needed for this iconic instrument to fulfill its goals. The first ground test of the unfurling at Redondo Beach in July was a promising start, NASA reported the operation to be a complete success.