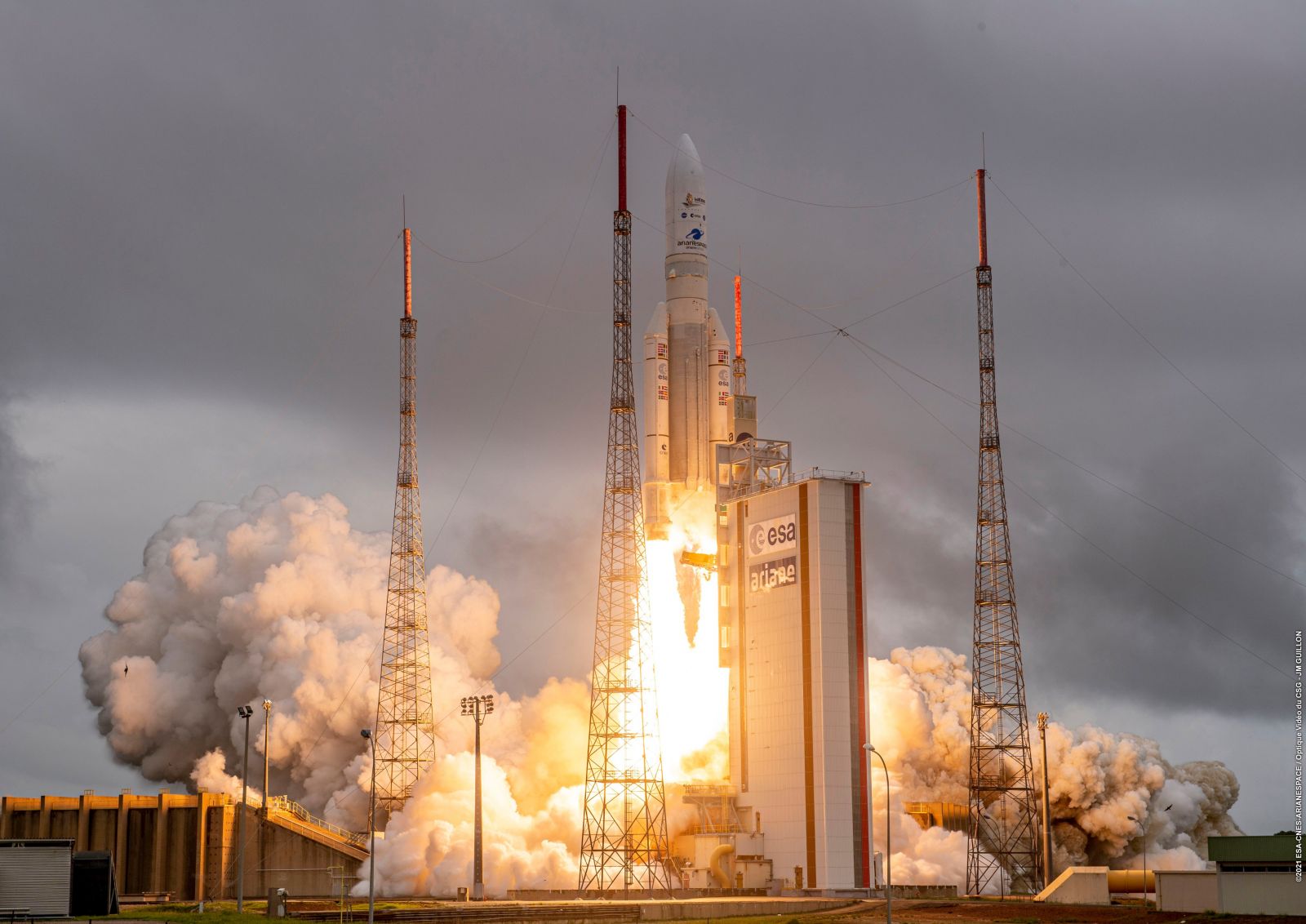 An Ariane 5 rocket launches the James Webb Space Telescope into space to begin its journey to its final science orbit some 1 million miles away from Earth. Credit: Arianespace

After 25 years of planning, designing, building and testing, the James Webb Space Telescope has finally launched into space on a mission to look back farther in time than ever before.

The James Webb Space Telescope, an international collaboration between NASA, the European Space Agency and the Canadian Space Agency, launched atop an Ariane 5 rocket at 7:20 a.m. EST (12:20 UTC) Dec. 25, 2021, from Kourou, French Guiana, in South America.

“Whenever we look at launches, they’re both an ending and a beginning,” said Thomas Zurbuchen, the associate administrator of NASA’s Science Mission Directorate. “They’re an ending of an engineering project on the ground with many amazing hours and challenges that are there. But they’re a beginning — a beginning of one of the most amazing missions that humanity has conceived.”

Poor weather, along with several technical difficulties, had caused delays that pushed liftoff to Christmas Day.

It took the rocket 25 minutes to place the telescope on its trajectory into deep space, deploying the observatory several minutes later. Webb’s solar array was deployed some 30 minutes after leaving Earth.

At about $10 billion, the telescope is the most expensive scientific instrument ever sent into space and the most powerful payload to launch from Earth for a journey looking back to the beginning of time in hopes of making revolutionary discoveries.

The James Webb telescope is expected to succeed the Hubble Space Telescope, as it can peer back farther into our Universe with advanced sensitivity and infrared resolution enabling a broader range of investigations in the fields of astronomy and cosmology. 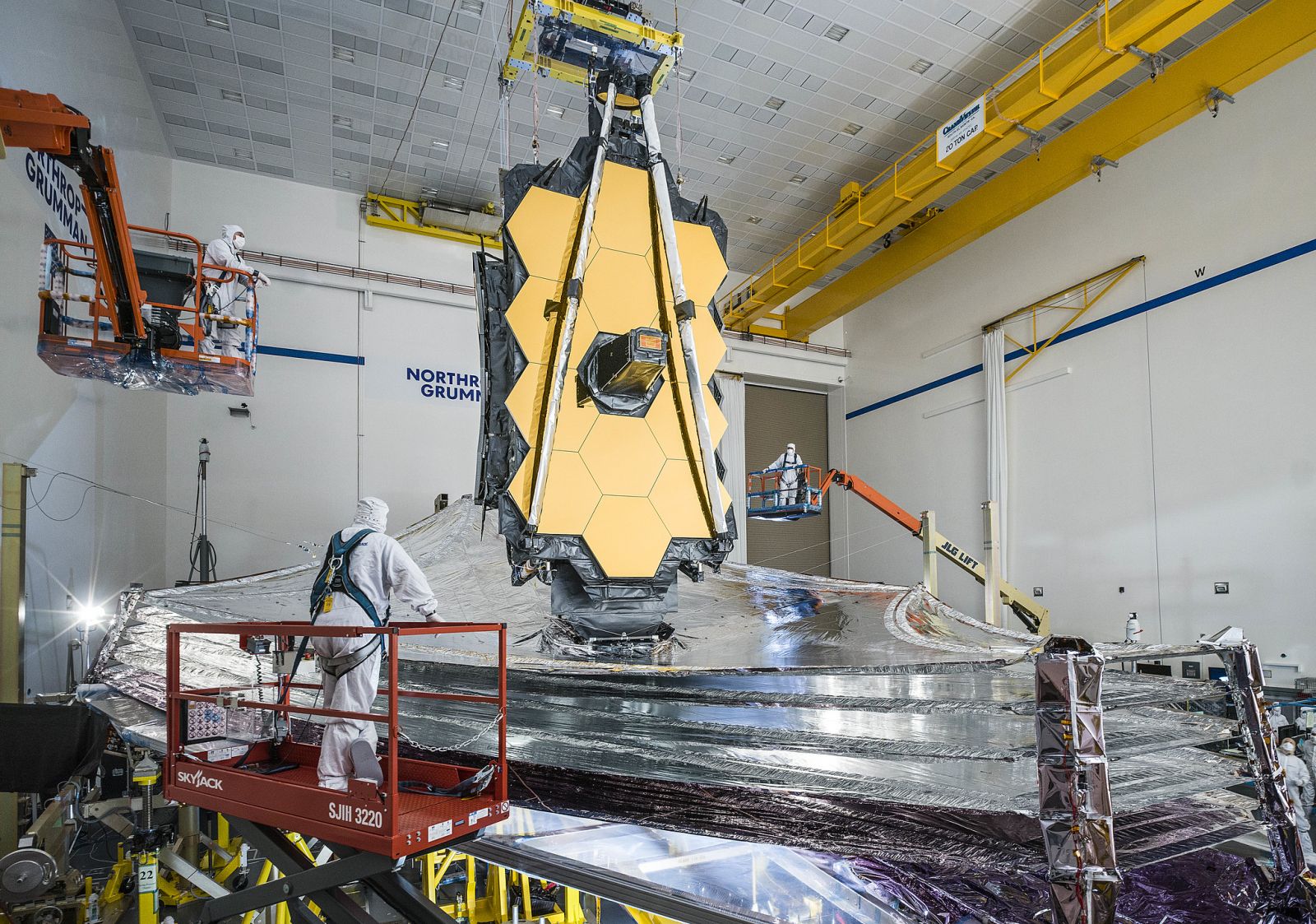 A view of Webb in December 2020 in one of its final deployment tests in California. Credit: NASA

A couple hours after launch, Webb is expected to deploy its high-gain antenna to begin a roughly 13-day complex deployment sequence by unfolding its sunshield and 21-foot (6.5-meter) diameter primary mirror. This will all occur as it travels to its final destination, the L2 Earth-Sun Lagrange point located about 1 million miles (1.5 million kilometers) from Earth, which it is expected to arrive about 29 days from now.

NASA refers to this period of time as “29 days on the edge.” The observatory will be operating too far out in space to be fixed by astronaut crews, so it all has to go perfectly.

The space telescope will be monitored from a secure control room in Baltimore, Maryland, by Rusty Whitman, leading the team of technicians who set up Webb’s control room, and his colleagues as the observatory comes online.

Once at its final destination, the telescope will be monitored for some six months around the clock as Webb is calibrated and being readied for its science mission, which is expected to last at least 10 years.

After launch, Webb’s operations are largely automated, however, teams of engineers are prepared to diagnose and correct any malfunctions. The next major events will be a mid course correction burn at 12.5 hours. The deployment of the sunshield pallet begins Dec. 28.