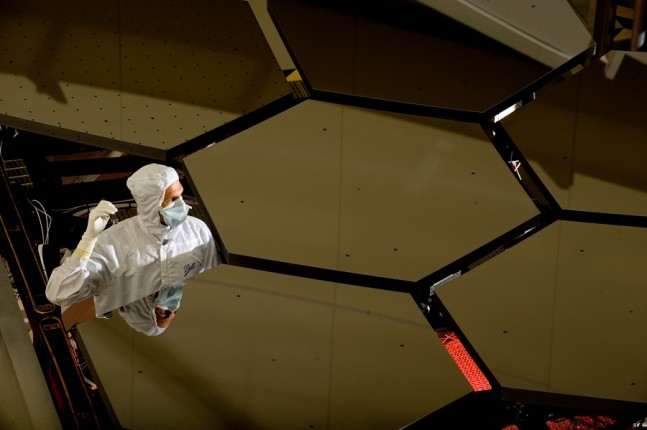 An engineer with Ball Aerospace stands inside the primary mirror for the James Webb Space Telescope. The upcoming year should be a big one in terms of the observatory's development. Photo Credit: Ball Aerospace / NASA

Development of NASA’s James Webb Space Telescope (JWST ) is progressing as NASA scientists, technicians, and engineers retrofit Chamber A, a thermal vacuum chamber, which was originally used to test manned spacecraft is now being tasked in the production of this new space-based observatory. Once the modifications are complete, Chamber A will be called into service to test the performance of the JWST components in working conditions.

The facility is located at NASA’s Johnson Space Center located in Houston, Texas and its use highlights the progress made toward the 2018 launch of the infrared and near-infrared telescope. The James Webb Space Telescope will launch in 2018 atop an Ariane 5 booster. The launch site will be the spaceport in Kourou, French Guiana. Photo Credit: Arianespace

The fielding of the JWST was first proposed in 1996 – six years after the Hubble Space Telescope had been sent to orbit aboard space shuttle Discovery on mission STS-31. JWST is a collaboration between some 20 nations and is intended to succeed Hubble. One of the more interesting aspects of this mission – is its size. The JWST is a very large spacecraft. As such, the European-produced Ariane 5 has been tapped to ferry the JWST aloft.

Once in use, it’s hoped that the telescope’s 21 foot 4 inch (6.4 m) primary mirror will be able to observe some of the first stars to be formed after the “Big Bang.” Another goal of the JWST program is to gather data on planet and star formation, among other related fields of research.

Unlike the HST, which has an altitude of 347 miles (559 km), the JWST will take a position 930,000 miles away (1.5 million km) from Earth, at Lagrange Point 2, which is one of 5 gravitational “balancing” points between the Earth and the Sun.

Aside from its massive primary mirror, Webb will carry the Near Infrared Camera (NIRCam), Mid-Infrared Instrument (MIRI), Near Infrared Spectrograph (NIRSpec), and Fine Guidance Sensor (FGS). These scientific instruments will allow it to review in greater detail how these celestial bodies were formed.

Once in position, the Space Telescope Science Institute (STScI ) will monitor and receive data from the telescope and pass it along to the scientific community.

In a 2011 interview with Clara Moskowitz of Space.com, John Mather, the Senior Project Scientist for the JWST, was asked why the telescope was so important and said, “It represents the hopes and ambitions of the 10,000 astronomers who have already used the Hubble. It is tremendously more powerful than the Hubble, in a new wavelength range. I’m pretty confident there will be surprises out there, things that will be worth all this work.”

With a proposed 10 year life expectancy, the JWST holds great potential for a plethora of scientific discovery.

“Maintaining the schedule with a very large number of optical and ground support equipment integration efforts, while securing the telescope to a suspension system inside the chamber and conducting a cryo-strength test is an incredible integration and test challenge,” said Mark Voyton, manager for the Optical Telescope Element and Integrated Science Instrument Module (OTIS).

If everything goes according to plan, the JWST should become the premier space-based observatory and will be tasked with serving thousands of astronomers from points across the globe. The JWST will study the Universe’s history in great detail. If successful, the telescope might be able to predict which solar systems contain worlds which have the greatest probability of supporting life. If so? The JWST will have come a long way since July of 2011.

In 2011 the United States House of Representatives’ appropriations committee on Commerce, Justice, and Science, upon review of the cost overruns and mismanagement – moved to cancel the project. The committee did this – by proposing to remove $1.9 billion from NASA’s FY 2012 budget – one-fourth of which was dedicated for the JWST. This budget was approved on July 7, 2011 – but a few months later, in November, Congress revered plans to cancel the telescope’s production, opting instead to cap spending on the spacecraft at $8 billion. A likely cause of this reversal of fortune – is the global nature of the project.

The James Webb Space Telescope is an international project led by NASA with its partners, the European Space Agency and the Canadian Space Agency.

Steve Shurtleff has been interested in space since seeing the Space Shuttle Enterprise in his hometown of Colorado Springs back in 1985. Having escaped the IT field and looking for something new, Steve jumped into the Space arena full force. Relatively new to the space journalism field, he currently has his first space book in print - 'Out There: A Small Guide to a Big Universe', a collaboration with Joe Latrell. He is currently working on the follow up books in the series.

I remember when the Hubble went up and I was pretty excited about that even though I was not a big space fan back then. Then it was broke. The most expensive object ever sent into space and it did not work. Unbelievable. They did not really ever make it as good as it was supposed to be. This monster is not going to be as easy to fix and is going somewhere it can’t worked on anyway.

I hope it works. I don’t want to give the impression I am against space telescopes. I think we should have a couple dozen of them out there. But the fact that funding is lacking for a relatively small one to detect comet and asteroid impact threats is pretty sad. That tells me this is more about careers in science and who is getting their slice of the pie than doing anything that might actually be meaningful to the human race. The radio telescope field on the back side of the Moon was an amazing project that should have been given a high priority. Very sad.