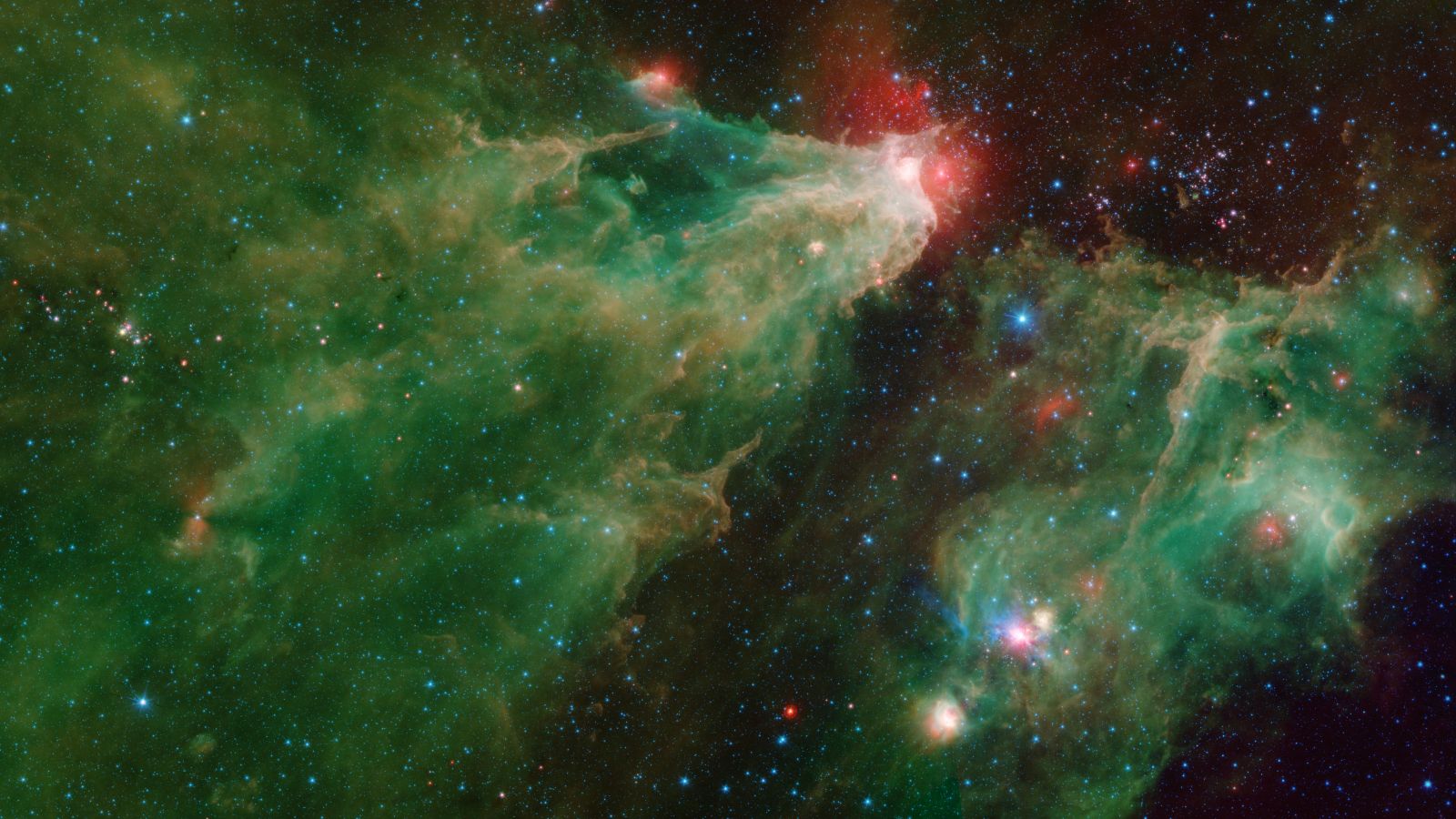 A mosaic by NASA’s Spitzer Space Telescope of the Cepheus C and Cepheus B regions. This image combines data from Spitzer’s IRAC and MIPS instruments. Photo Credit: NASA/JPL-Caltech

A brightly colored mosaic of nebulae in the constellation Cepheus captured by the Spitzer Space Telescope depicts a family of stars ranging from new ones in the process of formation to old ones that have evolved over time.

Using its Infrared Array Camera (IRAC) and Multiband Imaging Photometer (MIPS), Spitzer photographed two nebulae, Cepheus B and Cepheus C, which are depicted in green and orange. Nebulae are clouds of gas and dust and can include multiple star clusters. The different colors in the mosaic represent various wavelengths of light.

Spitzer, which observes in the infrared, took this picture, which features stars of all generations, before its liquid helium coolant ran out in 2009, during what was known as its “cold” mission.

Cepheus B, the nebula on the right, is populated by stars approximately four to five million years old and located several thousand light years from the Sun, A lone “runaway” blue star seen at the bottom right, is racing through the nebula, producing a shock wave or “bow shock” that appears as a red arc of light crowning it. On the nebula’s upper right sits a cluster of newborn stars that appear blue. A young, purple and blue nebula of newborn stars, can be seen at the bottom right.

An annotated mosaic by NASA’s Spitzer Space Telescope of the Cepheus C and Cepheus B regions, from the IRAC instrument, with colors corresponding to wavelengths of 3.6, 4.5, 5.8 and 8.0 µm, shown as blue, green, orange and red respectively. Photo Credit: NASA/JPL-Caltech

Cepheus C, which has a length of approximately six light years, has a high concentration of gas and dust. Appearing as a dark horizontal filament, it is an active star-forming region. The bright reddish region on the nebula’s upper right is the result of supernova explosions produced by the deaths of massive stars while the white area adjacent to it is actually the remnant of a much larger cloud that has since been scattered by stellar radiation. Eventually, as the young stars age, their winds will dissipate the gas and dust, forming more red and white regions.

A cluster of massive stars sits within the bright white area and beyond it. While the white color is produced by blue, green, yellow, and red infrared wavelengths combined, the red area surrounding it is made up of dust heated by radiation emitted by stars.

A feature that looks like an orange-red hourglass below Cepheus C’s dark filament is actually a massive star, V374 Ceph, which scientists believe is surrounded by a dark, dusty disk.

The range of stellar ages visible in the mosaic are what make it a “family portrait.” Stars form in dense areas like Cepheus C’s dark filament. During their lifetimes, their winds push out the gas and dust, leaving behind behind bright, colorful nebulae and visible star clusters.

Spitzer also captured a second image of the same nebula using just its IRAC instrument. The regions that are green in the two-instrument mosaic appear mostly red in this one.