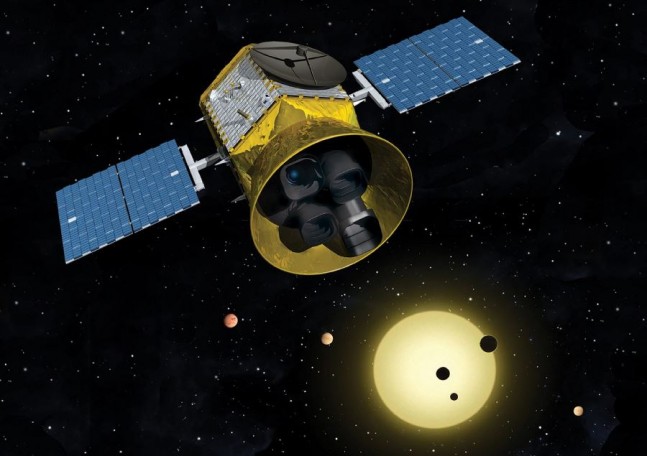 TESS will search for extrasolar planets (planets outside of our solar system) on a mission funded for up to three years (two years actively in orbit). The mission is performed in partnership with the Massachusetts Institute of Technology (MIT).

NASA’s TESS project page describes the scope of the mission as follows: The Transiting Exoplanet Survey Satellite (TESS) will discover thousands of exoplanets in orbit around the brightest stars in the sky. In a two-year survey of the solar neighborhood, TESS will monitor more than 500,000 stars for temporary drops in brightness caused by planetary transits. This first-ever spaceborne all-sky transit survey will identify planets ranging from Earth-sized to gas giants, around a wide range of stellar types and orbital distances.

No ground-based survey can achieve this feat. The satellite’s emphasis will be primarily on identifying Earth and “super-Earth-sized” planets, according to the NASA press release.

“During its first two years in orbit, the TESS spacecraft will concentrate its gaze on several hundred thousand specially chosen stars, looking for small dips in their light caused by orbiting planets passing between their host star and us,” said TESS’ Principal Investigator George Ricker of the Massachusetts Institute of Technology, Cambridge, Massachusetts. The onboard science instruments are comprised of four wide-field CCD cameras. They are capable of imaging dimensions of 24 by 24 degrees at an effective pupil diameter of 100mm. Each lens assembly is comprised of seven optical elements. The spacecraft itself is designed for maximum stability to optimize image quality. A Ka-band 100 Mbps downlink is included to facilitate the transmission of the large quantities of data gathered while in orbit. (More specifications are available on the TESS Fact Sheet.)

“The most exciting part of the search for planets outside our solar system is the identification of ‘earthlike’ planets with rocky surfaces and liquid water as well as temperatures and atmospheric constituents that appear hospitable to life,” said TESS Project Manager Jeff Volosin at NASA’s Goddard Space Flight Center in Greenbelt, Maryland. “Although these planets are small and harder to detect from so far away, this is exactly the type of world that the TESS mission will focus on identifying.”

SpaceX’s Falcon 9 booster has achieved an impressive rate of success during its five years of active service. Since it was first launched in 2010 – the v1.0 and v1.1 versions of the booster – have only encountered a single engine-out anomaly, which only impacted a secondary payload. The rocket has launched 12 times from Cape Canaveral and one time from Vandenberg Air Force base located in California.

Since there are no more ULA Delta II’s available, ULA’s price is too expensive for NASA.