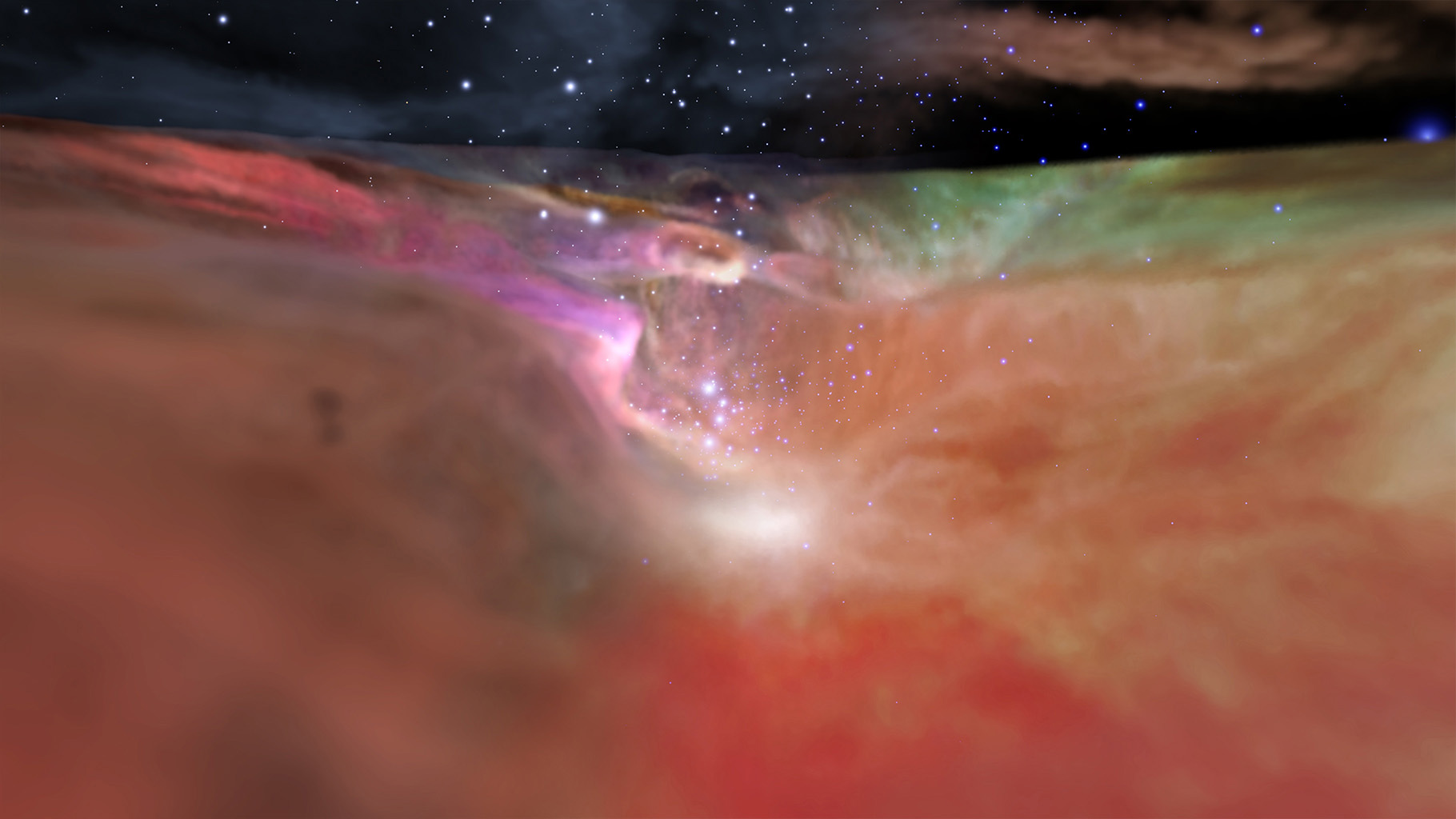 A new 3D video simulation that uses images taken by both the Hubble and Spitzer space telescopes takes viewers on a stunning simulated journey within the Orion Nebula.

Created by NASA scientists and computer visualization experts at the Space Telescope Science Institute in Baltimore (STSCI) and at the Caltech/Infrared Processing and Analysis Center (IPAC) in Pasadena, California, the three-minute video provides a closeup view of the stellar nursery, complete with baby stars, protoplanetary disks surrounded by gases, and bright clouds heated by radiation.

Available to planetariums and other informal science outreach projects, the simulation combines visible light images taken by Hubble and infrared ones captured by Spitzer. The Hubble Space Telescope was launched in April of 1990 and has been beaming back incredible images of the universe since 1993. Photo Credit: STS-31 / NASA

“This movie provides a uniquely immersive chance to see how new features appear as we shift to wavelengths of light normally invisible to our eyes.”

Objects that glow in infrared light are cooler than those that glow in optical light. By providing an infrared view of the nebula, Spitzer makes it possible to peer through heavy layers of dust to see newly-forming stars as well as those that are faint and low mass.

While watching, viewers can toggle back and forth between the Hubble optical views and the Spitzer infrared ones.

Visible within the constellation Orion, the Orion Nebula, located about 1,350 light years away, can be seen with the naked eye, appearing as a star or fuzzy region within Orion’s sword. One of the brightest nebulae in the sky, it is an active star-forming region.

Viewing the nebula, which is just two million years old, provides insight into the processes and structures that may have occurred when our Sun formed about 4.6 billion years ago.

Watching the video virtually transports viewers into the heart of the nebula, following the outline of its gas and dust and revealing its otherworldly topography, such as huge holes in the giant molecular clouds created by stellar winds and ultraviolet radiation coming from the massive stars of the Trapezium star cluster.

By layering two-dimensional Hubble and Spitzer images into the video, the creators successfully depict a three-dimensional model of the nebula, including the huge hole in the cloud of dust and cold molecular hydrogen.

Members of the team that made the video compare the process to modeling the ocean floor in three dimensions in order to accurately portray its mountains and valleys.

They started with a visible light surface, then began adding layers of infrared images. Each feature of the nebula was modeled independently and placed into its own image layer.

When all the layers were put together, protoplanetary disks, stars, bow shocks, and a thin layer of gas surrounding the nebula all became visible in the final product.

Frank Summers, STSCI‘s visualization scientist, said he wrote his own computer code to combine the huge number of partially transparent elements in the nebula’s gases, a choice that allowed him to run the visualizations on regular desktop computers without the need for a supercomputer.

A product of NASA‘s Universe of Learning program, the simulation is designed to showcase the benefits of multi-wavelength astronomy and convey how scientists interpret images captured by telescopes.

“Being able to fly through the nebula’s tapestry in three dimensions gives people a much better sense of what the universe is really like,” Summers stated. “By adding depth and structure to the amazing images, this fly-through helps elucidate the universe for the public, both educating and inspiring.”

It would be interesting to know…just how many days, it takes to travel through such a thing. For minutes in the video would take thousands of years. Maybe next time, have a stellar travel count on the side would be interesting. Just a wonderful thought!