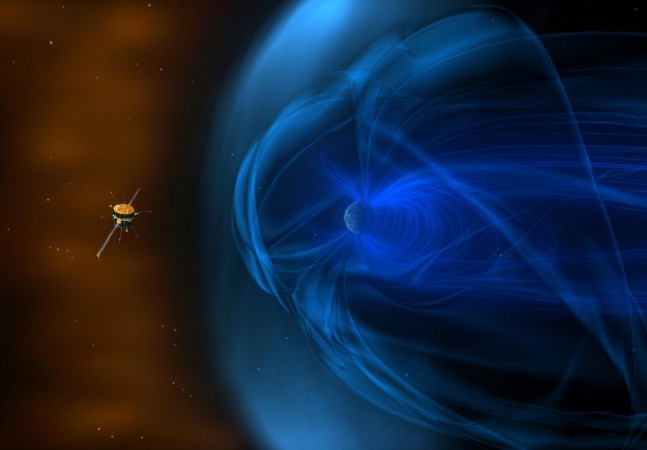 As each year draws to a close, it is common for individuals and organizations to look back to see how far they’ve come and to consider where they’ll go next. For NASA’s Wind spacecraft, which was launched near the end of 1994 to collect a data concerning the solar wind, what lies behind it is now 20 years worth of exploration and information gathering, with up to another 60 years to go from here.

Wind launched on Nov. 1, 1994, about a year and a half before its sister satellite Polar, which ceased operations in 2008. The two spacecraft comprise the Global Geospace Science (GGS) campaign, created to get a core comprehensive understanding of the solar wind — a stream of particles in the form of plasma that is released continuously from the Sun’s upper atmosphere — and its effects on the Earth’s magnetosphere.

The Wind spacecraft and its many instruments. Image Credit: NASA

GGS was extended into the International Solar-Terrestrial Physics (ISTP) Science Initiative, which currently still includes in Geotail from the Japan Aerospace Exploration Agency (JAXA), Cluster from the European Space Agency (ESA) and the Solar and Heliospheric Observatory (SoHO) from NASA and ESA. According to NASA’s website, the goal of ISTP is also “to understand the physical behavior of the solar-terrestrial system in order to predict how the Earth’s magnetosphere and atmosphere will respond to changes in solar wind.” Additionally, these spacecraft are part of a still-larger fleet called the Heliophysics System Observatory (HSO).

The Wind spacecraft plays the role of “scout and sentry” in the ISTP fleet, tasked with measuring “crucial properties of the solar wind before it impacts the Earth’s magnetic field and alters the Earth’s space environment (which contains charged particles, electric and magnetic fields, electric currents and radiation) and upper atmosphere in a direct manner,” according to NASA.

For its initial mission, Wind was sent into an elliptical orbit around the Lagrangian point designated L1. Lagrangian points experience balanced gravity from both the Earth and the Sun, meaning that a third object can be placed at any of these points and stay there relative to the other two bodies. There are five such points in the Earth-Sun system, and L1 lies between Earth and the Sun, about 932,000 miles away from the Earth.

When the solar wind monitor called the Advanced Composition Explorer (ACE) was launched in 1997 and also moved into orbit around L1, NASA took the opportunity to move Wind to L2, the Lagrangian point on the other side of the Earth. From there, it was able to provide measurements from deep within the magnetotail, which is the extension of the magnetosphere that trails behind the Earth.

Between the years 2000 and 2003, Wind was moved “through a variety of positions, including off to the side of the magnetosphere, 1.5 million miles away from Earth, and a return trip to the magnetotail,” according to NASA. In 2004, Wind was brought back to L1 permanently, where it remains operational and in orbit today. Diagram of the Lagrange Points associated with the Sun-Earth system (not to scale). Image Credit: WMAP Science Team / NASA

All those instruments have worked together for these last two decades to capture an enormous amount of useful data. The information has contributed to more than 2900 scientific publications.

“In its position at L1, Wind has witnessed a handful of first ever sightings of different kinds of electromagnetic waves traveling by in the solar wind,” said Lynn Wilson, deputy project scientist for Wind at Goddard, in an article on NASA’s website. “In space where a particle could travel 100 million miles before hitting another one, these waves simply can’t be working the same way sound or water waves do, pushing material along. It has opened up whole areas of research trying to understand these unexpected properties.”

Though it had a planned five-year mission, Wind has enough fuel to continue orbiting L1 until 2074, eight decades after its original ascent. It was built with a certain amount of longevity in mind, and is expected to bring in further useful information for a very long time.

NASA will soon be sending up a mission to learn more about magnetic reconnection, which is a process that occurs between the Earth and the Sun when their magnetic fields connect and disconnect. The Magnetospheric Multiscale (MMS) is currently scheduled to launch on March 13, 2015, and will use four separate instruments to gain a better understanding of the phenomenon. Following this mission in 2018 will be the Solar Probe Plus, to further study the solar wind and magnetic reconnection.