Kepler data helping home in on ‘other Earths’ 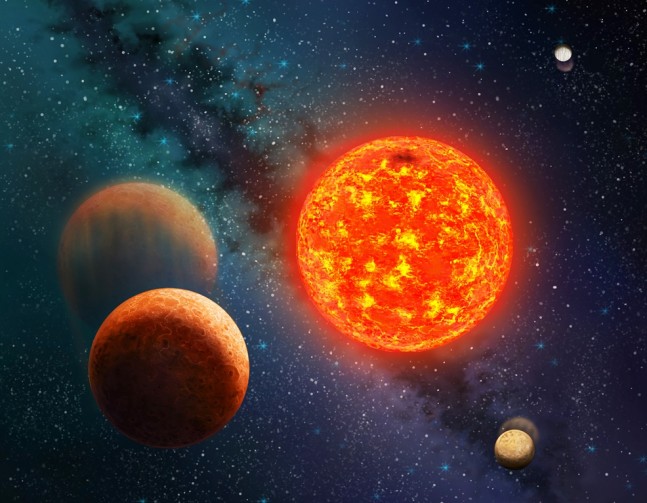 Data from the Kepler Space Telescope has led to the discovery of the first exoplanet - smaller than Earth. Image Credit: SETI Institute

Astronomers have used data pulled from NASA’s Kepler Space Telescope to find a world about half the size and a tenth of the mass of Earth. Estimated to be roughly the size of the planet Mars, the world called Kepler-138b is the first exoplanet to be detected using a new method of planetary discovery that yields not only a planet’s potential size but also its mass. This recent discovery also opens the door to finding other terrestrial worlds like our own.

The discovery of the first exoplanet to have its size and mass measured, and to have it determined to be smaller than that of Earth, increases the range of worlds that Kepler can help scientists discover.

Kepler-138b is the innermost of three planets that orbit Kepler-138, a star less than half the size of the Sun and roughly 30 percent cooler. The Kepler-138 system is located about 200 light-years from Earth in the direction of the constellation Lyra.

The new technique involves the study of not only the transit information gathered about this planet, but also two others in the same stellar system – Kepler 138c and 138d. Both of these worlds are approximately Earth-sized, but their densities have a large variation. Analysis of the combined data from the parent star and all three planets made the discovery possible.

“Each planet periodically slows down and accelerates ever so slightly from the gravity of its neighboring planets,” said Jontof-Hutter, a research associate at the Pennsylvania State University’s Center for Exoplanets and Habitable Worlds. “The slight change in time between transits allows us to measure the masses of the planets.”

The new technique also allows scientists to accurately estimate the density of an exoplanet. With these combined measurements, scientists can infer the composition or material that makes up a particular object. High-density exoplanets are more likely to contain more metals than their less-dense counterparts.

This type of discovery should allow scientists to look for ever smaller exoplanets transiting stars. By increasing the sensitivity of the measurements, scientists may one day be able to use the technique to determine with more certainty the habitability of any exoplanets that may be Earth-sized or smaller. Until this discovery, finding planets that were the size of the Earth was considered extremely difficult. Finding an Earth-sized or smaller exo-planet orbiting a star is far more challenging than finding the proverbial needle in a haystack. This new technique could, effectively, reduce the size of the haystack. This plot shows the masses and sizes of the smallest exoplanets for which both quantities have been measured. The solar system planets (shown in red) are for comparison. The three Kepler-138 planets (shown in orange) are among the four smallest exoplanets with both size and mass measurements, and their characteristics imply that their planets similar in size to Earth have a wide variety of compositions. Kepler-138b is the first exoplanet smaller than Earth to have both its mass and size measured. This significantly extends the range of planets with measured densities. Planets are primarily composed of three types of constituents: ‘rock’, which includes metals, is the densest of these components, whereas hydrogen and helium gases are the lightest. All planetary constituents get compressed when they are within massive planets, so for a given composition the density is larger for larger mass planets. Intermediate density planets can be composed of mixtures of rock plus gas and/or the third major planetary constituent – water and similar materials such as methane (in solid, liquid or gaseous form).
Image & Caption Credit: NASA Ames / W Stenzel

The Kepler mission uses the transit method to discover these new worlds. This technique watches for the subtle changes in a star’s brightness as a planet passes in front of it (as seen from Kepler’s viewpoint). The technique has been used to find thousands of exoplanet candidates and has confirmed the existence of hundreds more. The spacecraft was launched in 2009 with a planned primary mission of 3.5 years. Kepler is equipped with a 3.1 ft (0.95 m) primary mirror and an X-band communications array.

Engineers were not done with Kepler, however. They developed a new technique that allowed the spacecraft to remain stable enough for some observations using only two reaction wheels along with the assistance of the telescope’s thrusters. The new mission was named K2, or “Second Light”. This extended mission continues to find new planet candidates.

Arrrrgh! It’s “home in” or “hone” – the phrase “hone in” makes no sense. Otherwise, great article.

Before making your complaint, maybe you should have done a bit of research. From the on-line version of the Merriam-Webster dictionary:

“Hone in
intransitive verb
: to move toward or focus attention on an objective ”