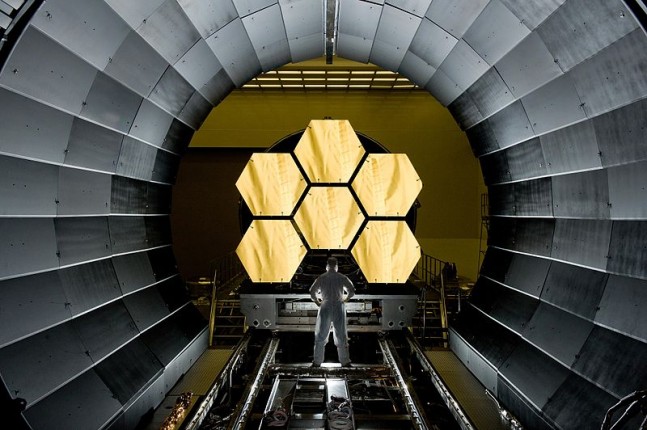 Tomasz Nowakowski
With just under 4 years until its planned launch in October 2018, the James Webb Space Telescope (JWST) project reports it remains on schedule and budget. However, technical challenges with JWST elements and major subsystems, have diminished the project’s overall schedule reserve and increased risk, says a new report released by the Government Accountability Office (GAO).
“During the past year, delays have occurred on every element and major subsystem schedule—especially with the cryocooler—leaving all at risk of negatively impacting the overall project schedule reserve if further delays occur,” GAO notices. JWST is one of NASA’s most complex and expensive projects, at an anticipated cost of $8.8 billion. With significant integration and testing planned until the launch date, the JWST project will need to address many challenges before NASA can conduct the science the telescope is intended to produce. The report indicates that the project has begun integrating and testing only two of the five elements and major subsystems. As such, maintaining as much schedule reserve as possible to navigate through almost 4 more years of integration and testing that remains, where prior work has shown problems are commonly found and schedules tend to slip, is critical. While the project has been able to reorganize work when necessary to mitigate schedule slips, this flexibility will diminish going forward. JWST is also facing limited short-term cost reserves to mitigate additional project schedule threats.

“The JWST project and prime contractor’s cost risk analyses used to validate the JWST budget are outdated and do not account for many new risks identified since 2011. GAO best practices for cost estimating call for regularly updating cost risk analyses to validate that reserves are sufficient to account for new risks,” the report reads. NASA officials said they conduct sufficient analysis to monitor the health of the budget.

GAO points out that these efforts do not incorporate potential impacts of risks identified since 2011 into estimates. “While the project has subsequently agreed to conduct a cost risk analysis of the contract, it is important that they follow best practices, for example, by regularly updating that analysis. Doing so would provide the project with reliable information to gauge whether the contractor is at risk of future cost overruns.” JWST will reside in a halo orbit close to Lagrange Point. Image Credit:

The project continues to face major technical challenges building the cryocooler that have significantly delayed delivery of key components, have made it the driver of the project’s overall schedule or the project’s critical path, and required the use of a disproportionate amount of project cost reserves. Since the 2011 replan, the cryocooler development has experienced over 150 percent cost growth. Consequently, it was one of the largest users of project cost reserves in fiscal year 2014 and is contributing to the project’s limited cost reserve status for fiscal year 2015.

All three cryocooler components (the cold head assembly, the compressor assembly, and the electronics assembly) fell significantly behind the delivery dates established during the cryocooler’s April 2013 schedule replan.

GAO has made a number of prior recommendations to NASA, including in December 2012 that the project perform an updated joint cost and schedule risk analysis to improve cost estimates. NASA initially concurred with this recommendation, but it later indicated that the tracking of information it already had in place was sufficient and ultimately decided not to conduct another joint cost and schedule risk analysis. GAO is the audit, evaluation, and investigative arm of Congress. It exists to support Congress in meeting its constitutional responsibilities and to help improve the performance and accountability of the federal government.

JWST will be a large infrared telescope with a 6.5-meter primary mirror, the premier observatory of the next decade, serving thousands of astronomers worldwide. It will study every phase in the history of our Universe, ranging from the first luminous glows after the Big Bang, to the formation of solar systems capable of supporting life on planets like Earth, to the evolution of our own Solar System.

JWST is an international collaboration between NASA, the European Space Agency (ESA ), and the Canadian Space Agency (CSA ). The NASA Goddard Space Flight Center is managing the development effort. The main industrial partner is Northrop Grumman; the Space Telescope Science Institute will operate JWST after launch. Not a surprise. Worked on this project. The management at Northrop has been incompetent. You have self-interested and unethical staff as leads on most of these segments. Good old boys club puts people with degrees from Hawaii or Long Beach State in charge of Sunshield or Bus. Idiotic engineering decisions which drive up cost by 10s of millions. NASA will have to pray they catch all the mistakes and this thing doesn’t fail on orbit. Good luck, I know where many of the skeletons are hidden…