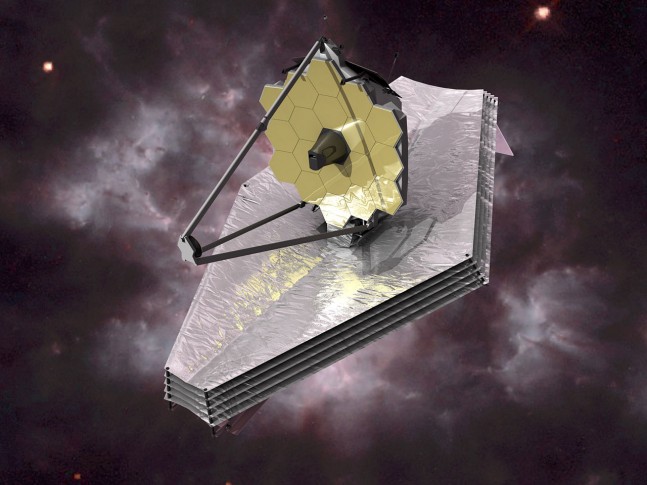 As the Hubble Space Telescope marks its twenty-fifth anniversary, NASA is preparing an even more ambitious telescope to be launched in October of 2018—the James Webb Space Telescope (JWST). Where the Hubble has probed the most distant galaxies in the universe in visible light and ultraviolet, the JWST will study the cosmos in the infrared light. JWST will have a much larger mirror than Hubble, which will enable it to peer deeper into space and farther into the past than what Hubble is capable of.

The Hubble Space Telescope was launched on April 24, 1990, aboard Space Shuttle Discovery on STS-31, commanded by Loren Shriver. Initially, it appeared to be a failure—photos from the Hubble were blurry. The mirror had an imperfection that essentially rendered the telescope near-sighted. The Hubble Space Telescope was launched in April of 1990 and has been beaming back incredible images of the universe since 1993. Photo Credit: STS-31 / NASA

The mission was a success, and ever since then the world has enjoyed the mind-boggling photos the Hubble has transmitted of far-off nebulae, globular clusters, pulsars, and distant galaxies. But it will not last forever.

Hubble will be deorbited in 2024. During the last Hubble servicing mission in May of 2009, astronauts Andrew Feustel and John Grunsfeld attached the Soft Capture Mechanism (SCM) for uncrewed spacecraft to latch on. This will enable NASA to control Hubble’s re-entry and prevent it crashing in populated areas.

The James Webb Space Telescope is often said to be a successor to Hubble, and in many ways it is. Like Hubble, it will be a huge space telescope that will observe the most distant objects in the universe. The project has four main goals: 1) to identify the first galaxies to form after the Big Bang, 2) to find out how galaxies evolved, 3) observe the birth of stars and planets, and 4) to search for life on extrasolar planets. But it is also very different from Hubble. Perhaps the most significant differences are that it will primarily observe infrared rather than visible light, and that it will not be in Low Earth Orbit (LEO).

The JWST will be launched by an Ariane rocket and will be boosted to the L2 La Grange Point, 930,000 miles (1,496,690 km) away. Hubble orbits the Earth at an altitude of 347 miles (559 km). The La Grange Points are points in space where the interaction of two gravitational fields equals the centripetal force required for an object to move with them. The Earth-Sun system has five LaGrange Points. L2 is on the opposite side of the Earth from the Sun, although it is located beyond Earth’s umbra, so the JWST will receive some solar radiation. To prevent light from the Sun, Earth, and Moon from heating up the telescope and interfering with observations, the JWST will be equipped with a sunshield.

Hubble is 43.5 ft (13.2 m) long and 14 ft (4.3 m) wide. Webb’s sunshield will be 69.5 ft × 46.5 ft (21.197 m × 14.162 m), with a 21.3 ft (~6.5 m) collecting mirror (compared to Hubble’s 8-foot mirror). The sunshield will prevent light from the Sun, Moon, and Earth from heating up the telescope and interfering with observations. The larger mirror will give the JWST greater light-collecting area, meaning it will see more distant objects, 10 to 100 times fainter than Hubble can see. Since light from more distant objects takes longer to reach Earth than does light from closer objects, JWST will be looking deeper into the past, enabling us to see the young universe. Interestingly, although the JWST’s mirror is much larger than Hubble’s, it is actually less massive. Hubble has a thick, solid glass mirror with a mass of 2,200 lbs (1,000 kg). JWST’s mirror will be composed of 18 lightweight beryllium segments. Altogether, the mass of the mirror will be 1,554.3 lbs (705 kg).

The reason Webb is configured to observe the infrared is because the most distant objects of the universe are receding from us so fast that they can only be seen in infrared. The faster an object recedes from an observer, the longer its wavelength, and its spectrum shifts toward the red. Eventually, if it’s receding fast enough, it will red-shift beyond the visible spectrum into the infrared. The JWST will be able to observe wavelengths from 0.6 to 28 micrometers. By comparison, Hubble can observe from 0.1 to 0.8 micrometers.

“Hubble rewrote the textbooks and we’re planning to rewrite the textbooks again,” said NASA spokesman Lynn Chandler. “JWST will answer the questions which at the moment we can’t think to ask.”

as a fan of astronomy I applaud this program. It will certainly increase interest in the universe.

What a boon doggle the JWST has become. First schedule to fly in 2010, it has been delayed and delayed and delayed. It is now more than four billion dollars over budget. The schedule has slipped yet again to 2018 (they set it further and further back every year) and that is IF the work actually is finished by then.

JWST has syphoned valuable dollars from much more productive research and will never produce the results that some are hoping for. Sitting at L2, if ANYTHING goes wrong (and that doesn’t happen with NASA very often these does it?) there is NO recovery mission. Period end of story end of project.

What is the basis of the 18 segments of the Webb telescope mirror being geometrically arranged as tessellating hexagons, whereas the Hubble has a solid glass mirror?

Hi James,
If memory serves, it is due to the sheer size of the mirror. There’s no launch vehicle that can launch a spacecraft of the JWST’s size to orbit.

Because in deep space the temperatures are extremely cold. Berylium works better for that useage. The optical work on the berylium was cutting edge and difficult when first undertaken. There was No way to manufacture anything large enough to catch the signals in any other manner.