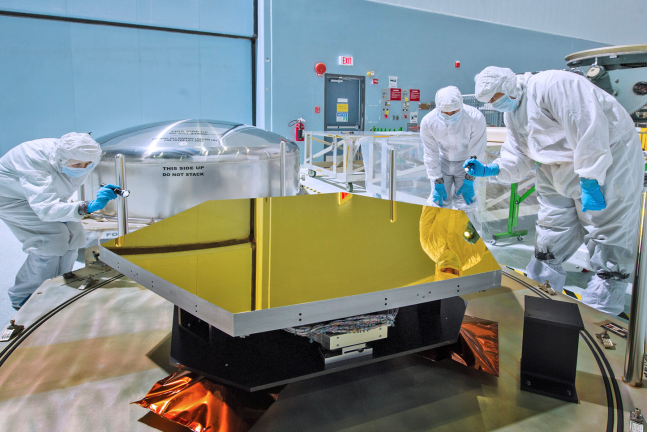 In this photo, NASA engineers and technicians inspect one of the James Webb Space Telescope's mirror segments which had been delivered prior to the final shipment of segments which arrived last week. Photo Credit: Chris Gunn / NASA GSFC

The last of the key components of the James Webb Space Telescope (JWST) has arrived at the Goddard Space Flight Center. The final three of eighteen hexagonal mirrors, shipped across eight states from Boulder, Colorado, to Greenbelt, Maryland, will be integrated into the structure that will hold together the primary mirror. Put together, these mirrors will form the largest space telescope ever built. Once assembled, the beryllium mirrors will be adjusted by computer-controlled actuators to correct any errors.

The shipping of the individual mirrors began in September 2012. Unlike the Hubble Space Telescope, which orbits at a mere three hundred fifty-four miles altitude, the James Webb telescope will orbit at a staggering one million miles from Earth.  The JWST will operate primarily in the infrared rather than in visible light. The mirrors were constructed by Ball Aerospace and Technologies Corporation in Boulder, Colorado, a subcontractor to Northrop Grumman.  The gold-coated mirrors were shipped in hermetically sealed containers designed to withstand the temperature and pressure changes that come with a trip from the high altitude of Boulder to the near sea level of Greenbelt, where they will be cryogenically tested and integrated into what acting telescope director Eric Smith calls “the structure that will hold them incredibly stable.” Ball designed not only the primary mirror but also the tertiary mirror and the fine-steering mirror. At over twenty-one feet in diameter, the primary mirror will not only be the largest mirror ever flown in space but also the first to deploy in space. The telescope will be launched by an Ariane rocket in October of 2018. The telescope will be folded within the rocket, much as the Apollo lunar roving vehicle was stowed within the Modular Equipment Stowage Assembly (MESA) of the lunar module, and will unfold after deployment.

Robert Strain, President of Ball Aerospace, said, “Ball’s sophisticated mirror architecture will provide James Webb with the most advanced infrared vision of any space observatory ever launched by NASA.  A huge amount of teamwork was needed to meet the exacting requirements for the telescope’s optical design and we’re eager to see the results.”

NASA will be hosting a social media event on January 22 in celebration of the arrival of all of the key components of the JWST at Goddard. Forty participants will have the opportunity to observe the cleanroom where the hardware is being stored, get a behind-the-scenes tour of the integration facilities as well as the test facilities that ensure that the telescope can endure the rigors of launch, interact with engineers and scientists who developed the JWST, including Nobel Laureate John Mather, and hear lectures from NASA scientists and engineers about Magnetospheric Multiscale Mission and the Global Precipitation Measurement Satellite.

The James Webb telescope will be able to look through interstellar dust clouds in order to find stars forming new solar systems, provide imaging of extrasolar planets, provide scientists with a look at the first light in the universe after the Big Bang.

I most sincerly hope that the contract for the Webb telescope includes ground testing, so we don’t have another Hubble debacle and launch a telescopethat can’t focus properly!!!