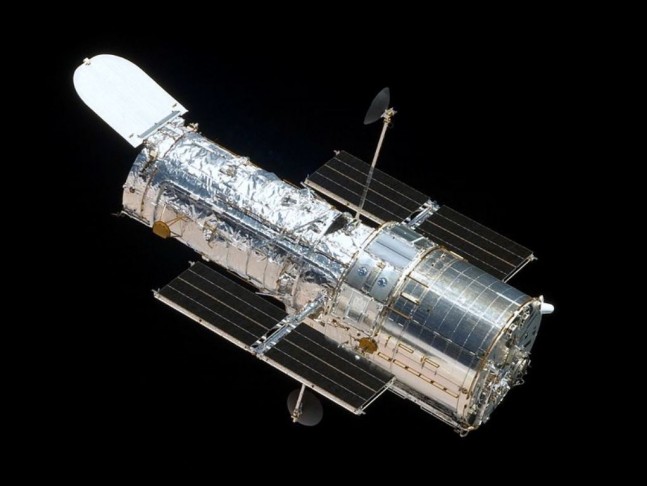 NASA's first great observatory, the Hubble Space Telescope, has been on orbit for a quarter century – and it has revolutionized how humanity views its place in the universe. Photo Credit: STS-125 / NASA

KENNEDY SPACE CENTER, Fla — Twenty five years might not seem like that long a period of time. However, for a spacecraft positioned in low-Earth orbit, each moment sees the weathering effects of radiation, the threat of imminent disaster due to micrometeoroids or debris, as well as the general hostile environment found 353 miles (569 kilometers) above our world. The first of NASA’s “Great Observatories”, Hubble has done more than survive – it has thrived and, in so doing, revolutionized the way that humanity views the universe. How the public views the telescope today is far removed from its first few years on orbit.

The flagship of NASA’s Great Observatories, the Hubble Space Telescope lifted off from Kennedy Space Center’s Launch Complex 39B on April 24, 1990. What followed has been viewed by some experts as one of the greatest eras of exploration in human history. It was all made possible thanks to the STS-31 mission that roared aloft on the Space Shuttle Discovery and by follow-on crews who had flown up to the observatory five times to both repair and upgrade the telescope.

The crew who delivered Hubble to its perch in the vast blackness of space was comprised of commander Loren Shriver, pilot Charles Bolden, and mission specialists Bruce McCandless II, Kathryn Sullivan and Steve Hawley. The quintet had the daunting task of correctly deploying the $1.5 billion astronomical device. Hubble brought capabilities to orbit that had never been attempted with a scientific device of this nature before. Hubble has benefited from five servicing missions. Each of which were carried out by NASA’s now-retired fleet of shuttle orbiters. (Click to enlarge) Photo Credit: NASA

Hubble’s primary mirror measures almost eight feet (2.4 meters) wide and, initially, it appeared that the name “Hubble Space Telescope” would go down as one of NASA’s greatest failures. This was due to the fact that the mirror had the tiniest deviance in its primary mirror – it was considered to be “too flat” by a mere 2,200 nanometers (2.2 micrometers).

Although better than images acquired by ground-based telescopes, what Hubble was producing during this time was far less than had been advertised.

The problem was spherical aberration – it caused light that was reflected off the edge of the mirror to focus on a different point from the light reflecting off the mirror’s center. In layman’s terms? The images were blurry.

NASA found itself in unfamiliar territory – the agency was a laughing stock. NASA responded as it always had in times like these: by doing something no one had ever done before – and that few had thought would work.

The Space Shuttle Endeavour would fly up to Hubble, this time to perform some corrective surgery on the spacecraft. Mission STS-61 would launch in December of 1993 with what had come to be called the Corrective Optics Space Telescope Axial Replacement (COSTAR) system as its primary payload.

To accomplish this feat, a team of spacewalkers rode Endeavour to Hubble’s orbital plateau. Led by spaceflight veteran Dick Covey, with shuttle pilot Ken Bowersox and a team of five mission specialists who included Story Musgrave, Jeffrey Hoffman, Kathryn Thornton, Claude Nicollier, and Thomas Akers, the mission was successful. Hubble was given a new lease of life. Hubble would not have been able to achieve the longevity that it has enjoyed without astronauts traveling up to the observatory to service and repair the spacecraft.
(Click to enlarge) Photo Credit: NASA

At this point, the telescope went from being the butt of jokes on late night TV to revolutionizing the field of astronomy. Almost overnight, the flaws in the lens had been forgotten as the collective jaws of not just the scientific community, but also of the world, had hit the floor.

The images that the telescope produced did not just change how humanity viewed distant stars and nebula (although the Eagle Nebula’s Pillars of Creation, imaged by Hubble in incredible detail, created a sensation when it was released), it also altered how mankind saw the planets in the Solar System and how we viewed our place in the universe.

In fairly short order, Hubble went from being something to laugh at – to something the world simply could not get enough of.

After the loss of the Space Shuttle Columbia in 2007, the NASA Administrator at the time, Sean O’Keefe, opted to have the remaining shuttle missions only fly to the International Space Station. The decision was met with criticism. With O’Keefe’s chief reason for being NASA’s head now accomplished – to place the space agency on a more sound economic footing – a new Administrator, Michael Griffin, decided that Hubble deserved one last flight.

STS-125 took to the skies on a (very) hot day in May of 2009 on the Space Shuttle Atlantis. The crew of seven included several astronauts who had flown to the Hubble before. These were the mission’s commander, Scott Altman, and mission specialists John Grunsfeld and Michael Massimino (the trio were part of the crew of STS-109; the fourth servicing mission to travel to Hubble), they were joined by Greg Johnson, Megan McArthur, Michael Good, and Andrew Feustel. STS-125 left Hubble outfitted with two new instruments: the Cosmic Origins Spectrograph and the Wide Field Camera 3. The crew also refurbished a number of the telescope’s operating systems. One of the new items affixed to Hubble was a soft-capture mechanism for when the spacecraft is de-orbited – probably sometime in the mid 2020s. One of the key scientists involved with the final servicing mission to the Hubble noted the improvements and upgrades made to the telescope during STS-125. “The telescope was given an extreme makeover and now is significantly more powerful than ever, well-equipped to last into the next decade,” said Ed Weiler, associate administrator for NASA’s Science Mission Directorate at the time of the STS-125 mission.

It is likely that when Hubble conducts its last orbit and plunges back to Earth, the three-year period of embarrassment that the telescope initially had to endure – will have been completely forgotten. Given that the spacecraft will have provided more than three decades’ worth of scientific discoveries at that time – it is unfortunate that more was not done to try and save it.

In the end, if remembered at all, the few years when the telescope did not work as it had been advertised will have been buried by all the stunning images it has captured – data about the cosmos we live in and by how it has changed our understanding of the universe.

“This Hubble anniversary is really bittersweet for me,” Bolden, now NASA’s Administrator, said during a recent event held in Washington, D.C., where the official Hubble 25th anniversary image was unveiled. “It’s bitter because 25 years is a really long time and I hate admitting that I’m that ‘mature’, well, not mature, just plain old (laughs). It’s sweet because of all that Hubble has allowed humanity to see and learn over this past quarter century.”

Want to see what Hubble has given to the world? Check out this review from SpaceFlight Insider partner, rocketSTEM! Hubble’s Top 100 Images

Thank you for the article ‘Hubble: NASA’s Greatest Observatory Open Its Eyes’.
Was a bit confused by the photo caption ‘Discovery‘s Canadarm prepares to extract Hubble from within the orbiter’s 6-foot-long payload bay. Photo Credit: NASA’.

The Shuttle’s payload is much larger than just 6 feet.

Nontheless, kudos to all involved!