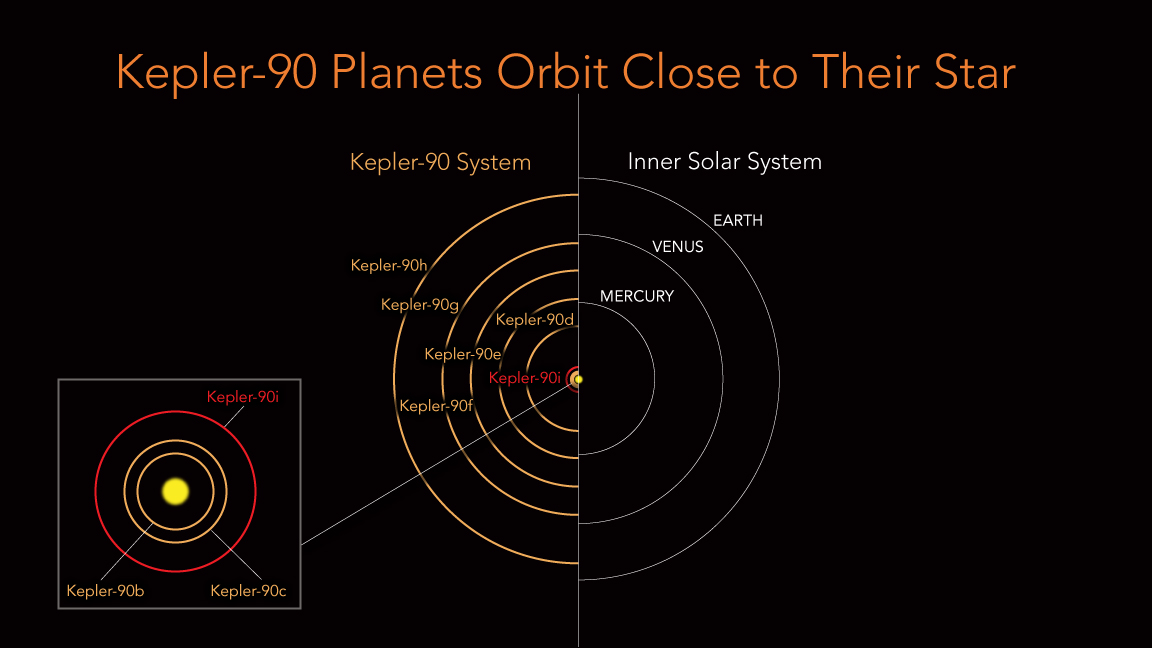 Kepler-90 is a Sun-like star, but all of its eight planets are scrunched into the equivalent distance of Earth to the Sun. The inner planets have extremely tight orbits with a “year” on Kepler-90i lasting only 14.4 days. In comparison, Mercury’s orbit is 88 days. Consequently, Kepler-90i has an average surface temperature of 800 degrees Fahrenheit [427 °C] and is not a likely place for life as we know it. The structure of the Kepler-90’s system hints that the eight planets around Kepler-90 may have formed more spread out, like the planets in our own Solar System, and then somehow migrated to the orbits we see them in today. Image & Caption Credit: NASA/Ames Research Center/Wendy Stenzel

Contrary to what other outlets attempted to suggest, NASA did not announce that it had discovered aliens. Rather, a computer trained to find exoplanets by identifying weak signals in data collected by NASA‘s Kepler mission discovered two new planets, each in multi-planet systems.

Software engineer Shallue came up with the idea of training computers to detect the tiny changes in brightness caused by the transit of a planet in front of its parent star within the voluminous data returned by the Kepler space telescope.

Computers can be trained to distinguish different types of objects from one another, such as dogs from cats, through artificial “neural networks” based on networks of neurons in the human brain.

Human researchers had already gone through the Kepler data and identified planets from strong signals. Following its training, the neural network successfully found the weak signals that indicate planets but were missed by researchers.

“In my spare time, I started googling for ‘finding exoplanets with large data sets’ and found out about the Kepler mission and the huge data set available,” Shallue said. “Machine learning really shines in situations where there is so much data that humans can’t search it for themselves.”

Between 2009 and 2013, Kepler continuously observed 150,000 stars searching for drops in brightness caused by planets passing in front of the stars.

In 2014, after a reaction wheel malfunctioned, it was re-purposed to conduct a more limited exoplanet search. Kepler has redefined what humanity knows about these distant worlds. Of the 3,500 exoplanets discovered since 1992, 2,500 were found by Kepler.

Shallue and Vanderburg first taught the neural network to recognize previously confirmed transiting planets within a data set of 15,000 signals.

They then had it look at 670 star systems already known to have multiple planets, with the notion that these would be the best places to find undiscovered worlds. 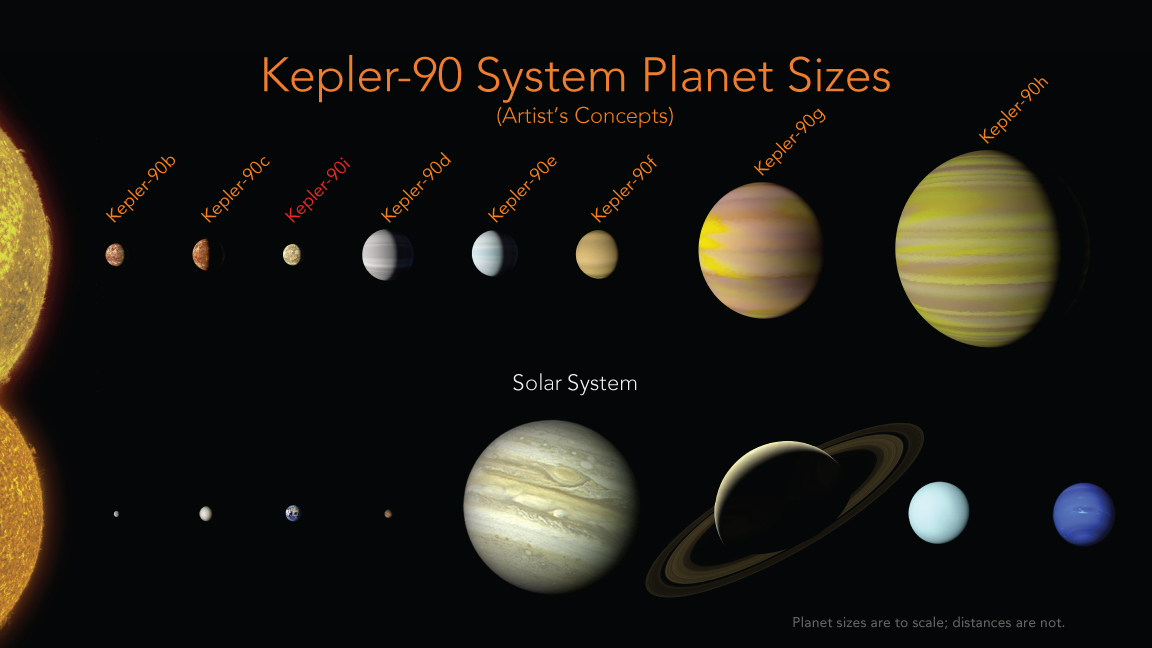 The Kepler-90 planets have a similar configuration to our Solar System with small planets found orbiting close to their star, and the larger planets found farther away. In our Solar System, this pattern is often seen as evidence that the outer planets formed in a cooler part of the Solar System, where water ice can stay solid and clump together to make bigger and bigger planets. The pattern we see around Kepler-90 could be evidence of that same process happening in this system. Image & Caption Credit: NASA/Ames Research Center/Wendy Stenzel

Kepler-90i is the eighth planet discovered orbiting the Sun-like star Kepler-90, setting a record for the exoplanet system with the most planets found to date.

The third of the eight in order from the star, Kepler 90i is too hot to be habitable. Estimated to be 30 percent bigger than Earth, it circles its star once every 14.4 days and has an estimated temperature of more than 800 degrees Fahrenheit (427 °C).

All the Kepler-90 planets are scrunched into a region slightly smaller than the Earth-Sun distance. Scientists suspect they may have been more spread out when they formed but subsequently migrated inward.

Much like in our Solar System, Kepler-90’s smaller planets are located in its inner regions, and its larger planets further out. The furthest planet, Kepler-90h, orbits the star every 331.6 days and is approximately the size of Jupiter.

Kepler-90, located approximately 2,545 light years from Earth in the constellation Draco, may have even more planets orbiting at a greater distance, as Kepler did not search the more distant regions of its orbit.

Kepler-80g, the second planet found by the neural network, is approximately the size of Earth and the sixth planet to be found orbiting its star. It circles the star once every 14 days.

Like the seven planets in the TRAPPIST-1 system, Kepler-80‘s six worlds orbit in a resonant chain, meaning their mutual gravity locks them into their current positions, resulting in a very stable system. Somewhat dimmer than the Sun, Kepler-80 is a dwarf star located approximately 1,160 light years away.

With as many as two quadrillion possible planetary orbits in the initial Kepler data, there could be many more planets waiting to be discovered. Shallue and Vanderburg hope to eventually have the neural network go through all the Kepler data.

“These results demonstrate the enduring value of Kepler’s mission,” Dotson emphasized. “New ways of looking at the data – such as this early-stage research to apply machine learning algorithms–promises to continue to yield significant advances in our understanding of planetary systems around other stars. I’m sure there are more firsts in the data waiting for people to find them.”

A paper on the discoveries has been accepted for publication in The Astronomical Journal. So, while not quite as exciting as the fake news being spun by other outlets, today’s announcement by NASA does expand our knowledge of worlds that are circling distant suns. 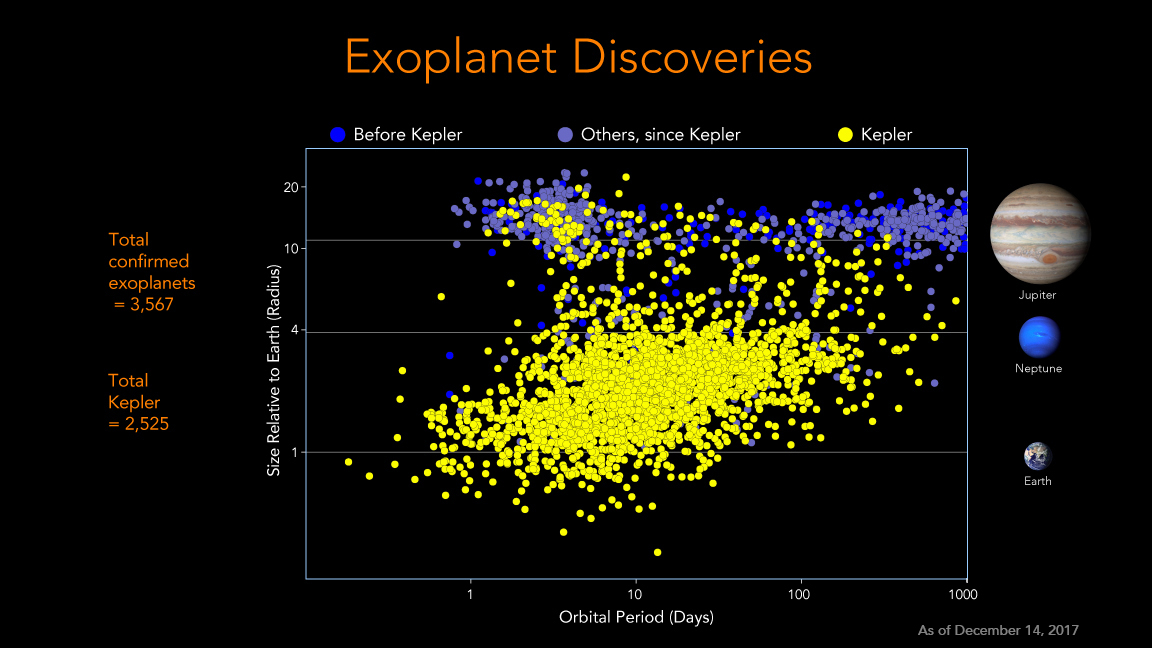 Today, as shown above, we know of over 3,500 confirmed exoplanets, with more than 2,500 of those found in the Kepler data. These planets range in size from larger than Jupiter to smaller than Earth. In just a couple decades, thanks largely to Kepler, we have gone from suspecting exoplanets existed to knowing that there are more exoplanets than stars in our galaxy. Image & Caption Credit: NASA/Ames Research Center/Jessie Dotson and Wendy Stenzel (Last Updated: Dec. 14, 2017. Editor: Rick Chen)