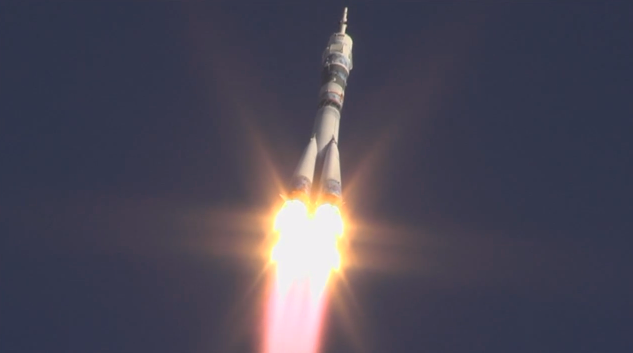 Baikonur Cosmodrone served a new purpose last night, to ignite the torch for the 2014 Olympic Winter Games. Three fresh crew members bound for the International Space Station launched from the steppes of Kazakhstan atop their Soyuz TMA- 11M rocket at 11:14 p.m. EST (Wednesday, 10:14 a.m. Nov. 7, Kazakh time). Like the Olympics, this flight was a very international affair with crew members representing the U.S., Japan and Russia on board.

U.S. astronaut Rick Mastracchio, the Soyuz’s commander, Russian Federal Space Agency (Roscosmos) cosmonaut Mikhail Tyurin and Japanese Aerospace Exploration Agency (JAXA) astronaut Koichi Wakata utilized an expedited method to get to the orbiting laboratory. Approximately six hours after liftoff, at 5:31 a.m. EST, the crew arrived at the station, bringing its compliment up to nine members. This is the first time that the station has had a crew of this size since 2009.

After a series of checks to ensure that the seal between the Soyuz spacecraft and station are secure, the hatches were opened about two hours later. A highly-visible component of this mission was the Olympic Torch which traveled with the crew to the ISS. Photo Credit: NASA / Bill Ingalls

The station’s population will drop to six when, on Sunday, Nov. 10, U.S. astronaut Karen Nyberg, European Space Agency (ESA) astronaut Luca Parmintano and the station’s Expedition 37 commander Fyodor Yurchikhin, closing a six-month stay on the ISS. They will take the Olympic torch with them – but not before it takes a special trip.

The day prior to Nyberg, Parmintano and Yurchikhin’s departure, two of the station’s other crew members, Russian cosmonauts, Oleg Kotov and Sergey Ryazanskiy, will take it outside the ISS during a special spacewalk. This torch will be used to light the Olympic flame at Fisht Stadium, located in Sochi, Russia – kicking off the 2014 Olympic Winter Games. The Expedition 38 crew utilized a relatively new method that delivered them to the ISS about six hours after launch. Photo Credit: NASA / Bill Ingalls

With Yurchikhin leaving the station, fellow Roscosmos cosmonaut, Oleg Kotov will take over as the station’s commander until he leaves in March of 2014. At that time, a new historical milestone will occur when Wakata becomes the first-ever Japanese commander of the ISS.

“In the middle of next March, Astronaut Wakata will be the first Japanese who will serve as ISS Commander, for Expedition 39. I know Wakata takes this role very seriously. In addition, Wakata is expected to engage in various experimental operations, such as deploying the small satellites brought by “KOUNOTORI 4” (HTV4) last August, and docking/releasing “Dragon” and “Cygnus” commercial spacecraft,” said JAXA’s President Naoki Okumura. “I strongly believe that he will demonstrate his superb capabilities as the ISS’ Commander, as well as his peripheral duties on board the space station.”

Fellow cosmonaut and current station resident Sergey Ryazanskiy and U.S. NASA astronaut Michael Hopkins will join Kotov for the ride back to Earth.

Soyuz also is carried cargo which will be used to continue the ISS’ role as a research facility. A good portion of which concerns the impact of long-duration stays in the microgravity environment of space on the human body. Equipment which will be used to study how space travel affects the human immune system, skeletal structure and even a questionnaire looking into space headaches rode fire to orbit on Soyuz.

The ISS has been on-orbit since 1998 and has had a continuous crew presence since November of 2000. To date, some 200 space travelers from a wide-range of backgrounds and nationalities have visited the ISS, including a small handful of space tourists. The ISS has also been a port-of-call for a diverse array of spacecraft. NASA’s space shuttles, Russia’s Soyuz and Progress spacecraft, ESA’s Automated Transfer vehicle, JAXA’s HTV as well as the commercial spacecraft manufactured by Space Exploration Technologies and Orbital Sciences Corporation have all been docked or berthed there.