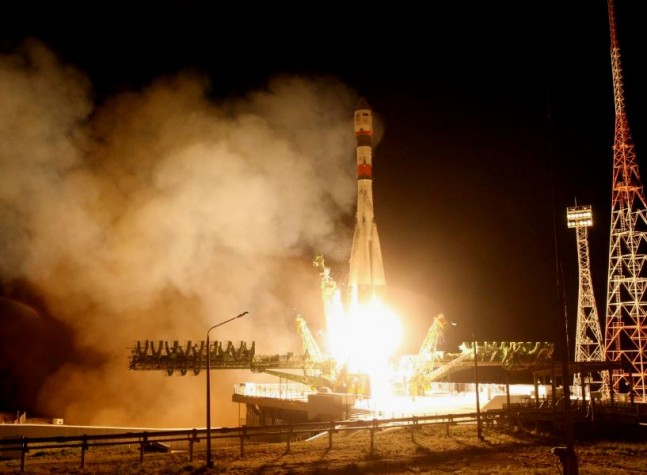 A Russian Soyuz 2-1A rocket lifted off from the Baikonur Cosmodrone at the very opening of a launch window at 4:50 p.m. EDT (2050 GMT) with the fourth Foton M spacecraft. The Foton M-4 carried aloft an array of biological and other experiments. It will now remain on orbit for several weeks before returning to Earth via parachute.

The Foton-M is used by both Russia and the European Space Agency (ESA) for microgravity research, designed to be conducted in orbit and then recovered. The Foton-M is an upgraded version of the Foton complete with upgraded telemetry systems, better thermal control and increased battery life. A descendant of the Vostok spacecraft, the Foton-M is responsible for orbiting and returning experiments to Earth. Photo Credit: Russian Space Web

In order to return its experiments to Earth, the Foton-M vehicle uses a return capsule, whose roots can be traced back to the Vostok and Voskhod missions of the 1960s. The Vostok spacecraft’s first flight was in May 1960 on an unmanned test mission, the Korabl-Sputnik 1. After a total of six additional test flights, the Vostok was cleared for flight in April 1961. Yuri Gagarin took his historic first space flight on the Vostok 1 on April 12, 1961.

The Vostok was designed for the cosmonaut to be ejected after reentry where they would then descend via parachute. Despite not being designed for a crewed landing, the vehicle was still recovered in tact.  Vostok has influenced the design of future spacecraft, with the most popular variations used for Earth observing and reconnaissance missions.

Zenit was the Soviet Union’s first reconnaissance satellite and flew multiple missions between December 1961 and June 1994. The Soyuz 2-1A’s first flight carried a leftover Zenit satellite in 2004, although it was never intended to be operational. The Resurs remote sensing program was construction with some satellites using the same configuration as the Zenit; the Resurs-F1 and F2, for example. The Kometa, or Yantar-1KFT, utilized the Zenit film capsule and equipment module of other Yantar satellites. In order to push the Soviets ahead of the American Gemini Program, the Vostok was modified to accommodate more complex missions. The upgraded Voskhod 1 spacecraft came equipped with three seats, and the previous ejection system was omitted. Due to the size of the vehicle and lack of space, the crew could not wear spacesuits.

More upgrades came with the Voskhod 2. The vehicle now contained only two seats, allowing for extra room to enable the crew to have the capability of performing a spacewalk. The ejection system was still not included; however, an inflatable airlock was added and used by cosmonaut Alexei Leonov during his 13 minute extra-vehicular activity (EVA).

Four additional Voskhod missions were planned; however, they were cancelled and the newly developed Soyuz spacecraft was selected instead. The Vostok is also responsible for spawning the Bion series of research satellites and a total of eleven Bion missions were carried out, and responsible for returning biological specimens back to Earth for further analysis.

Bion was eventually replaced by Bion-M, first launched in 2013, combining the Vostok capsule with a Yantar equipment module. The Foton program was first launched in 1985 and the first of 12 first-generation Fotons flew until 1999. The Foton utilized the Bion configuration but instead of focusing on biological missions, the Foton focused on microgravity research.

The Foton-M was first introduced in 2002 and is an upgraded version of the Foton. The first Foton-M mission launched in October 2002, but failed due to a malfunction with the Soyuz-U launcher. The Soyuz-U experienced a stage one engine failure, falling next to the launch pad and killing one person as well as injuring others. Foton-M 2 and M 3 missions were both successful and completed in 2005 and 2007 respectfully. The Foton-M can trace its heritage back to the Vostok 1 craft and Yuri Gagarin’s first flight. Photo Credit: Russian Space Web

What sets this mission apart from previous Foton-M missions is the vehicle’s use of a Yantar equipment module instead of the Vostok or Zenit.  The Yantar module enables the spacecraft to remain in orbit for longer periods of time than other module versions.

Russia’s Soyuz 2-1A carried the Foton-M 4 into orbit, marking the thirty-sixth flight of a Soyuz-2. Currently, the Soyuz-2 has replaced the Soyuz-U for all launches except for the Progress supply missions to the International Space Station (ISS). Later this year we will see the first Progress launch aboard a Soyuz 2-1A.

The Soyuz 2-1a first and second stage burn in unison and consist of four strap-on boosters fueled by RD-117 engines surrounding the RD-118 powered second stage core. The third stage rests on top of the core and is powered by a RD-0120 engine, responsible for carrying the Foton-M to its place in orbit.

Today’s launch lifted off from Site 31/6 at Baikonur Cosmodrome. Pad 31/6 was originally intended to test the R-7 missile and is one of two Soyuz pads at the Cosmodrome and one of only seven worldwide. The mission was the forty-second launch of the year and the nineteenth for Russia, which includes the failed Proton launch back in May as well as two Soyuz launches from French Guiana. Twelve Soyuz rockets have flown this year, with seven of them being Soyuz-2 vehicles.

Next week a Soyuz-U is slated to launch, carrying the Progress M-24M resupply spacecraft to the ISS. In August we will see the next Soyuz-2 liftoff, delivering a pair of European Galileo navigation satellites into orbit. Foton-M4 was launched atop a Soyuz 2-1A rocket, the latest iteration of the launch vehicle that sent cosmonaut Yuri Gagarin to orbit. Photo Credit: Roscosmos