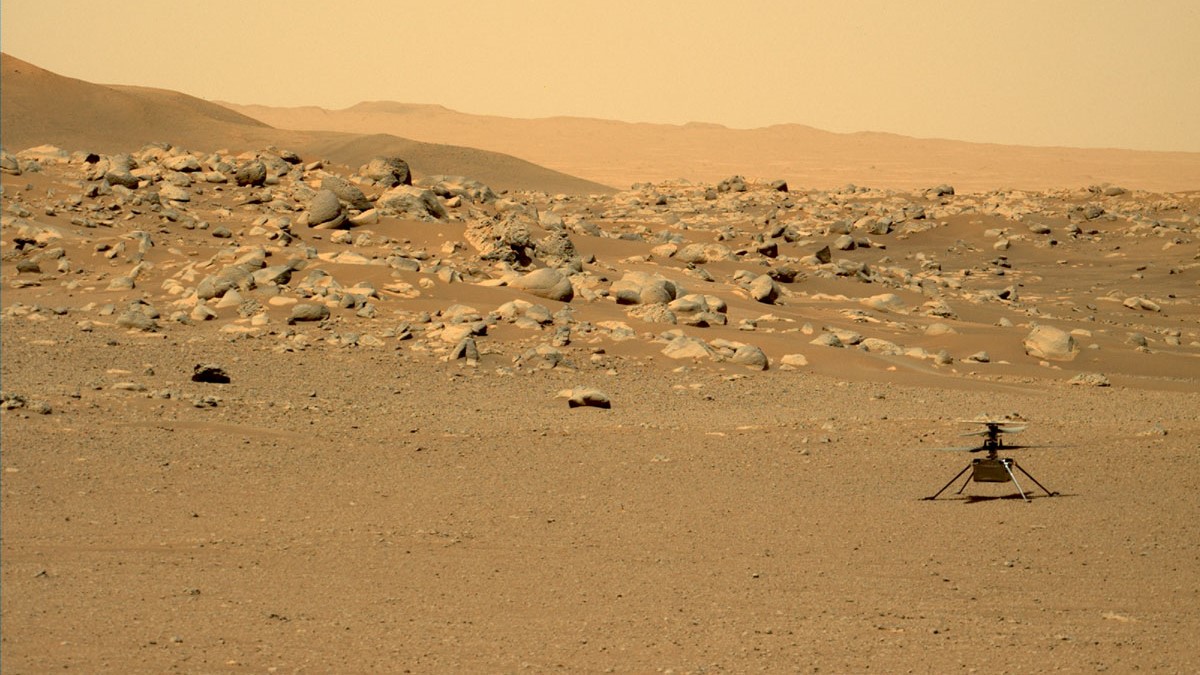 Ingenuity as seen by Perseverance in June 2021. With winter getting colder and the dust continuing to accumulate on its solar panels, the flying days of the small helicopter may be nearing an end. Credit: NASA

The end could potentially be near for NASA’s Ingenuity helicopter as Martian winter and dust storms wreak havoc on the drone’s vital systems.

The Mars-fairing helicopter relies on communication relays between itself and the Perseverance rover in order for its onboard systems to be actively monitored by flight controllers on Earth. On May 5, 2022, for the first time since the helicopter’s operation began just over a year ago, Ingenuity missed a planned communication check-in with the rover.

Pieces of the crashed descent stage that was used to safely place Perseverance and Ingenuity on the surface of Mars can be seen in the upper right corner of this image, which was taken April 3, 2022, during the helicopter’s 24th flight. Click to enlarge. Credit: NASA

Scientists at NASA’s Jet Propulsion Laboratory hypothesize the anomaly is attributed to the helicopter entering a low-power state. Engineers believe an accumulation of dust atop Ingenuity’s solar arrays combined with colder Martian temperatures have forced the small spacecraft to shut itself down in order to conserve energy.

Many of the helicopter’s vital electrical systems rely on the aircraft’s solar arrays to sustain power. A centralized battery system helps to regulate power to Ingenuity. These batteries, six in total, maintain a charge from the vehicle’s solar arrays.

With the reduced charge coming from the arrays due to blockage from sand, Ingenuity’s field-programmable gate array, FPGA, shut itself down automatically. The FPGA helps to control onboard heaters that help to keep the electrical systems warm during the bitter Martian nights. According to NASA, the ambient environmental temperature currently around minus 112 degrees Fahrenheit (minus 80 degrees Celsius).

Additionally, the FPGA also switches other electronics aboard the vehicle on and off in order to maximize power conservation, NASA said.

Once the vehicle’s temperature drops below 5 degrees Fahrenheit (minus 15 degrees Celsius), the heater automatically kicks on, and the spacecraft slowly shuts down in order to protect its electrical systems. With the FPGA shut down, the Ingenuity helicopter is unable to heat itself or communicate with the Perseverance Rover.

NASA said when the sun rose the next morning and began charging the batteries, the helicopter’s internal mission clock was not in sync with the rover’s. As such when it tried to communicate with Perseverance, it wasn’t listening.

As such engineers commanded the rover to spend all day listening for the helicopter’s signal. When the radio link was reestablished, Ingenuity reported that it was healthy.

“We have always known that Martian winter and dust storm season would present new challenges for Ingenuity, specifically colder sols, an increase in atmospheric dust, and more frequent dust storms,” said Ingenuity Team Lead Teddy Tzanetos of NASA’s Jet Propulsion Laboratory in Southern California in a news update. “Every flight and every mile of distance flown beyond our original 30-sol mission has pushed the spacecraft to its limits each and every sol on Mars.” 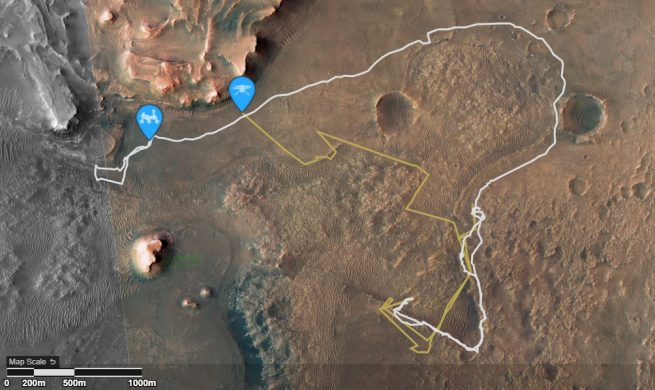 The current location of the Ingenuity helicopter and Perseverance rover. The helicopter’s flight path is in yellow and the path the rover has taken is in white. Credit: NASA

Scientists at the Jet Propulsion Laboratory believe that by adjusting the set temperature for which the helicopter’s heater is turned on from 5 degrees (minus 15 degrees Celsius) to minus 40 degrees Fahrenheit (minus 40 degrees Celsius), Ingenuity should be able to conserve crucial energy that it is desperately trying to absorb due to the lack of sunlight being collected from the solar panels.

NASA had originally hoped to extend Ingenuity’s mission into September. However, if the solution posed by the scientists at the Jet Propulsion Laboratory prove to be ineffective, it could mean the end for the experiment.

“Our top priority is to maintain communications with Ingenuity in the next few sols, but even then, we know that there will be significant challenges ahead,” Tzanetos said. “I could not be prouder of our team’s performance over the last year, let alone our aircraft’s incredible achievements on Mars. We are hopeful that we can accumulate battery charge in order to return to nominal operations and continue our mission into the weeks ahead.”

Ingenuity was originally developed to prove that powered flight was possible on another planet.

During its time on the Red Planet, it has accomplished its mission and more. With 28 flights across the surface of Mars in over a year of operation, the Ingenuity helicopter has helped to pave the way for the advancement of human exploration. 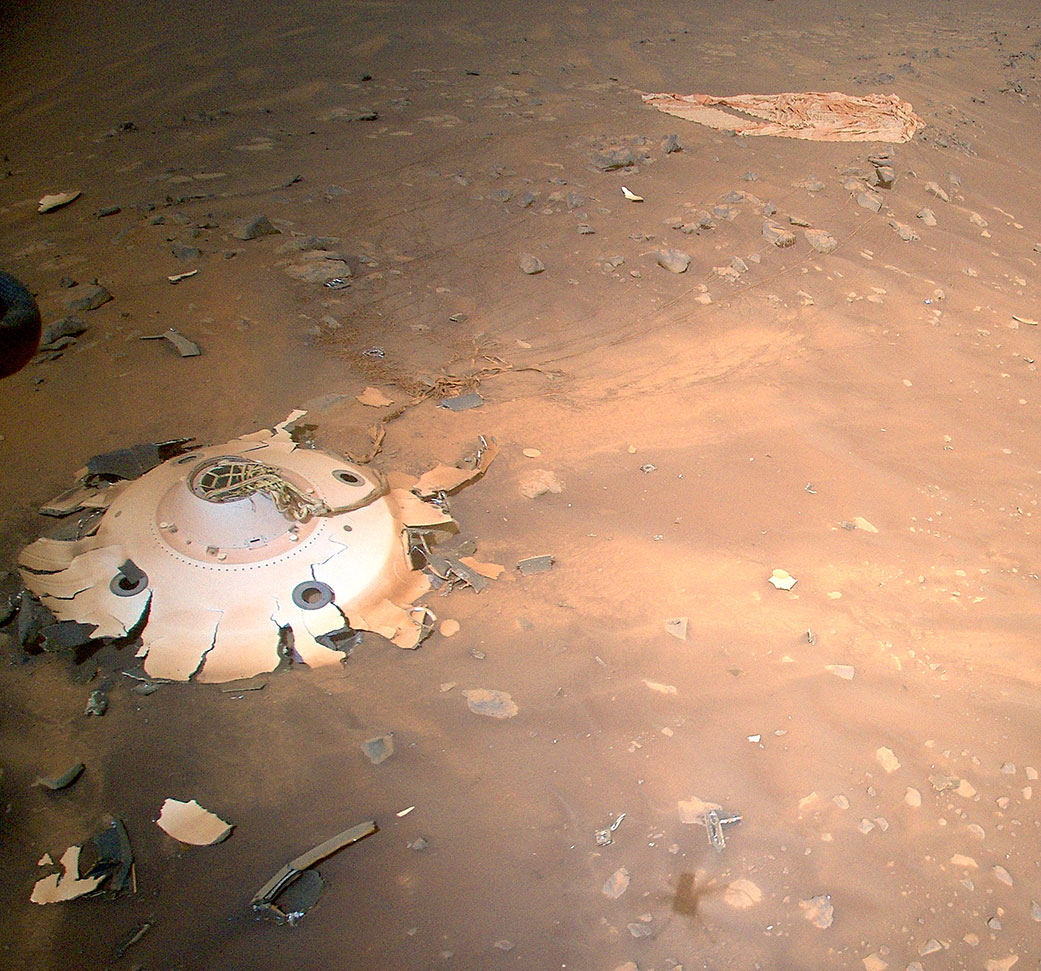 During Ingenuity’s 26th flight on April 20, 2022, the drone flew around the crashed backshell and parachute that was used during it and the Perseverance rover’s entry, descent and landing on Mars. Credit: NASA