Two separate proposals to study centaurs have been submitted for the latest round of NASA’s Discovery missions. The Discovery program funds solar system exploration missions in the $1 billion range, including launch and flight costs.

Once thought to be asteroid-comet hybrids, centaurs, which are icy planetesimals that orbit between Jupiter and Neptune, are now recognized as Kuiper Belt Objects (KBOs) that were recently perturbed and scattered inward into the region of the gas and ice giant planets. Once in this region, they are perturbed by the giant planets and either expelled from the solar system, thrown back into the Kuiper Belt, or captured into the orbits of Jupiter-family comets.

Nearly 20 proposals were submitted to NASA’s Discovery program in response to a December 2018 Announcement of Opportunity (AO) by NASA’s Science Mission Directorate. Discovery missions, which complement larger missions, seek answers regarding the formation and evolution of the solar system, the conditions under which life emerged on Earth, and both the hazards faced by and resources needed for human space exploration.

Titled Centaurus and Chimera, the two proposed centaur missions are very different from one another. Centaurus, whose principal investigator is Alan Stern of the Southwest Research Institute (SwRI) in Boulder, Colorado, is a flyby mission that would visit several centaurs. Chimera, whose principal investigator is Walter Harris of the University of Arizona‘s Lunar and Planetary Laboratory, is an orbiter that would study one centaur, Centaur 29P/Schwassman-Wachmann 1 (SW1) in detail.

SW1, along with Chiron, the first centaur discovered and largest one known, are among Centaurus‘s flyby targets.

“Working closely with deputy PI Kelsi Singer, our science team, and JPL mission designers, we have found a really unusual trajectory that lets us explore a series of targets of different sizes,” Stern emphasized.

Both Centaurus and Chimera will be solar-powered, thanks to new technology that makes it possible for solar panels to operate beyond the orbit of Saturn. That technology was first tested on NASA’s Juno mission to Jupiter, when that spacecraft was turned partially away from the Sun.

The ability to use solar panels at such a great distance allows NASA to save plutonium for use in much more distant missions.

“Centaurus is a non-nuclear Discovery proposal to make the first reconnaissance of centaurs–escaped Scattered Disk KBOs–and other primitive bodies, via a series of reconnaissance flybys,” according to a poster presentation about the mission presented by Singer at the American Astronomical Society‘s (AAS) Division for Planetary Sciences (DPS) 51st Annual Meeting in Geneva, Switzerland, in September of this year. 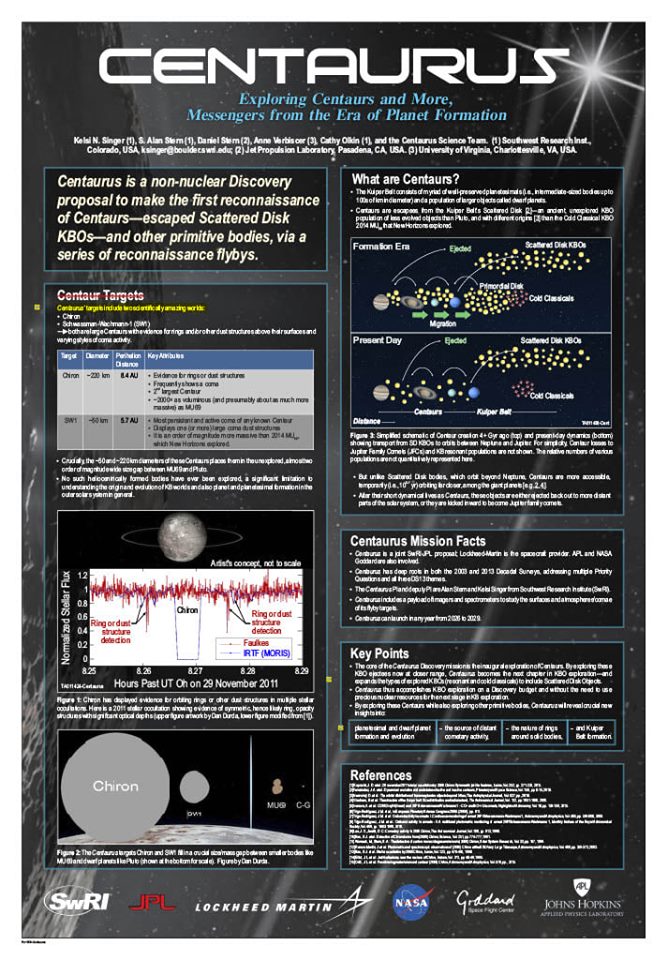 Onboard the spacecraft, should the mission be selected, will be a suite of imagers, both color and panchromatic; multiple spectrometers, which will study objects’ surface geology and composition, atmospheres, and any detected satellites or rings.

“In total, the Centaurus payload involves four experiments, all with direct lineage to instruments in flight and in build for other missions,” Singer noted.

Chimera, should it be chosen, will orbit SW1 for at least two years and possibly longer, if the mission is extended. It will enter a close orbit around the centaur to monitor its activity, map its surface characteristics, observe surface changes over time, and monitor outbursts up close. To accomplish these tasks, the spacecraft will be equipped with visible cameras, including one with three filters, which will search for specific features within the coma; thermal cameras, which will measure temperature changes on SW1’s surface; a mass spectrometer, which will study gas composition, and an infrared spectral imager that will identify the composition of both the coma and surface.

“Centaurs are a source population for comets moving inward from beyond Neptune in chaotic orbits. They drift in and bounce around chaotically for a few million to a few tens of millions of years. Twenty-five to 30 percent wind up scattered into the inner solar system, where they become short-period Jupiter-family comets,” Harris stated.

“The big question is, how do we relate what these objects were (KBOs) with what they become? The answer is the centaur–an intermediate state.”

SW1 was discovered in 1922, eight years before Pluto was found, and was the first object other than a planet found with an orbit entirely beyond Jupiter. It has been observed undergoing regular outbursts, making it the most active small body in the outer solar system. Scientists estimate it has a 70 percent chance of becoming a Jupiter-family comet within the next 10,000 years.

Next month, four of the Discovery mission proposals will be selected to move on to the next phase, a detailed concept study, which must be submitted by November 2020. Scientists and space engineers selected by NASA will review these studies, rate them, and select two for flight some time in 2021.

“This image, created via a stack of 20 separate photos, shows comet SW1 after it experienced an outburst. The image on the left was processed to show the various jets emitted during the outburst. Image Credit: By Juan lacruz – Own work, CC BY-SA 4.0”

Changes made. Thank you, Juan.