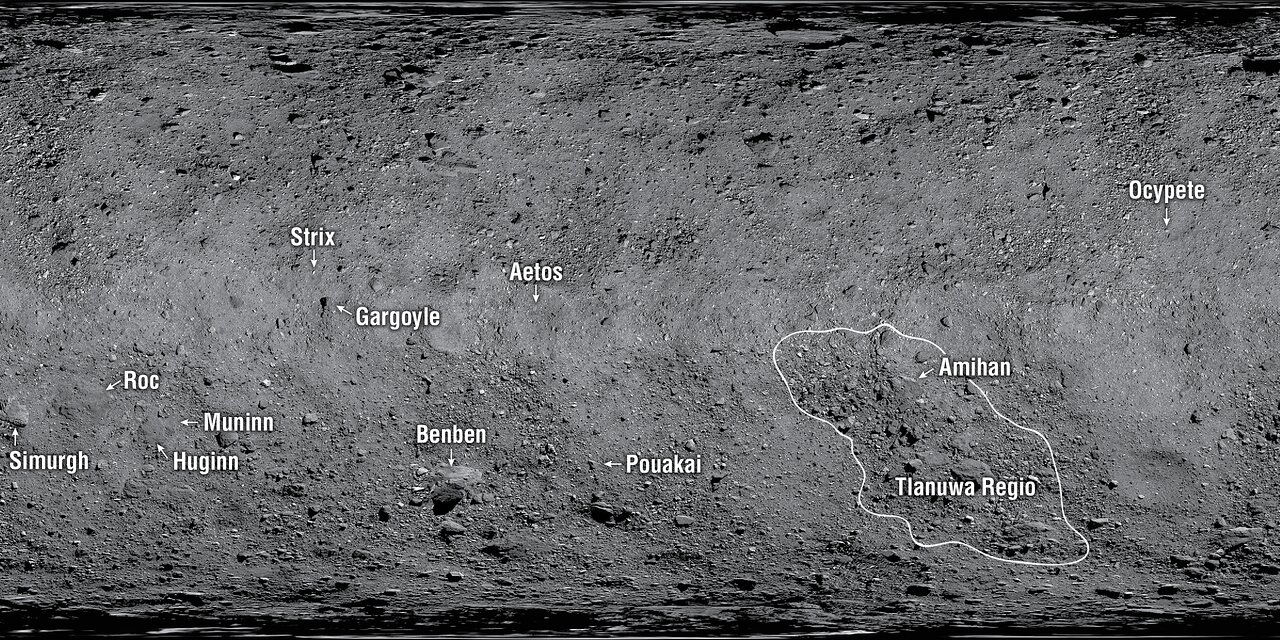 Official names were assigned to 12 features on the asteroid Bennu. Image Credit: NASA/Goddard/University of Arizona

Twelve surface features on the asteroid Bennu, imaged by NASA’s Origins, Spectral Interpretation, Resource Identification, Security, Regolith Explorer (OSIRIS-REx) probe from orbit, have been officially named by the International Astronomical Union (IAU), which regulates the naming of celestial objects and their surface features.

These features include a prominent 71-foot (21.7-meter-) boulder on the asteroid’s southern hemisphere, along with various other boulders, ridges, craters, and trenches on the 1640-foot- (500-meter-) wide space rock.

All 12 names were submitted to the IAU by the OSIRIS-REx team. Because Bennu is named for an Egyptian solar deity often portrayed as a bird, scientists agreed to name features on the asteroid after mythical birds, bird-like creatures, and places with which these creatures are associated.

OSIRIS-REx, launched in September 2016, is NASA’s first asteroid sample return mission. A year after the spacecraft arrived at Bennu in December 2018, scientists selected four possible landing spots, which they later narrowed to Nightingale, with Osprey as a back up site.

Nightingale is located in a crater close to Bennu’s north pole while Osprey, also in a crater, is near the asteroid’s equator. Beginning in late August 2020, the probe will land and start collecting surface samples totaling at minimum 2.1 ounces (60 grams) using its robotic arm. Collected samples will be placed in a Sample-Return Capsule (SRC) which will return to Earth in September 2023.

“Since arriving at the asteroid, the OSIRIS-REx team has become incredibly familiar with all of the geological features on Bennu. These features are providing us with insight into Bennu’s history, and their new names symbolize the essence of the mission–studying the past to both discover our origins and understand our future,” explained OSIRIS-REx principal investigator Dante Lauretta of the University of Arizona at Tucson.

Bennu was chosen for this mission because it has pristine carbonaceous materials, which are key to the organic molecules required for life. The asteroid is considered an ideal sample of solar system matter from its earliest years, before the Earth formed.

The OSIRIS-REx Laser Altimeter (OLA), one of six suites of instruments on board the spacecraft, played a key role in selection of the landing sites by constructing a three-dimensional map of the asteroid. Funded by the Candian Space Agency (CSA) and built in Ontario, OLA surveyed Bennu’s surface for a year, collecting data used to create the map.

“It’s historic. This is perhaps the best characterized surface of any planetary body in the solar system, and it was made with Canadian technology. So it’s really, really exciting,” Haltigian emphasized.

Rotation of asteroid Bennu as captured by OSIRIS-REx on December 3, 2018. Image Credit: NASA/Goddard/University of Arizona

Approximately four percent of the returned sample will be given to Canada for study by current and future scientists.

“Here, we’re going to be able to unravel the history of the solar system in labs in Canada. The way I like to think about it–there’s kids in grade school and in kindergarten and people that haven’t been born yet that are going to be working on these samples,” Haltigian said.

The $800 million OSIRIS-REx mission is the third in NASA’s New Frontiers program, after the Juno mission to Jupiter and the New Horizons mission to Pluto and the Kuiper Belt.

The IAU announced its approval of the following names for features on Bennu in the statement below:

The approved Bennu surface feature names are listed below. Bennu’s diverse terrains — including regiones (broad geographic regions), craters, dorsa (ridges), fossae (grooves or trenches) and saxa (rocks and boulders) — will be named after birds and bird-like creatures in mythology, and the places associated with them.

Tlanuwa Regio is named for the giant birds who scattered the Earth with pieces of a serpent that turned into standing pillars of rocks in Cherokee mythology. Tlanuwa Regio is an area covered by large boulders in Bennu’s southern hemisphere.

Benben Saxum is named for an ancient Egyptian mound that arose from the primordial waters Nu. In Egyptian mythology, the god Atum settled upon Benben to create the world after his flight over the waters in the form of the Bennu bird. Benben Saxum is the tallest boulder on Bennu.

Roc Saxum is named for the Roc, an enormous bird of prey in Arabian mythology of the Middle East. Roc Saxum is the largest boulder feature on Bennu.

Simurgh Saxum is named for the benevolent, mythological bird in Persian mythology that was said to possess all knowledge. Simurgh Saxum defines the prime meridian on Bennu and is the basis for the asteroid’s coordinate system.

Huginn Saxum and Muninn Saxum are adjacent boulders named for the two ravens, Huginn and Muninn, who accompany the god Odin in Norse mythology.

Ocypete Saxum is named for one of the Greek harpies, the half-maiden and half-bird personification of storm winds that would snatch and carry things away from Earth. Ocypete Saxum is located near the origin of the particle ejection event of 19 January 2019 on Bennu.

Amihan Saxum is named for the Tagalog (Philippines) deity, who is depicted as a bird and was the first creature to inhabit the Universe in Tagalog mythology. This large, flat boulder appears to be partly buried and is located in Tlanuwa Regio, which has an unusually high concentration of large boulders.

Pouakai Saxum is named for the monstrous bird who kills and eats humans in Māori (Polynesia) mythology. Pouakai Saxum is a 10.6 metre-wide boulder located in Bennu’s southern hemisphere, slightly north of Benben Saxum.

Aetos Saxum is named for the childhood playmate of the supreme god Zeus, who was turned into an eagle by Hera in Greek mythology. Aetos Saxum is a conspicuously flat boulder, with a general wing-like shape located near Bennu’s equator.

Gargoyle Saxum is named for the French dragon-like monster with wings, a bird-like neck, and the ability to breathe fire. Gargoyle Saxum is a large prominent boulder near the mission’s backup sample site, and is one of the darkest objects on the surface.