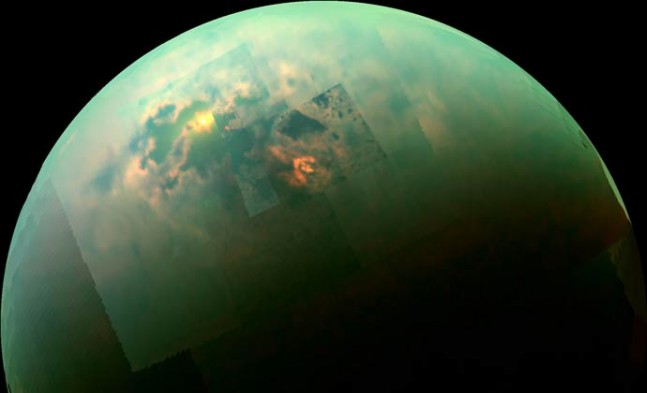 Saturn’s moon Titan is a unique world, and the only place in the Solar System known to have seas and lakes (liquid methane/ethane) on its surface, other than Earth. And just like our home world, if you look at them at the right moment from space, you can see sunlight gleaming off of them, as the Cassini spacecraft just did again on Aug. 21, 2014. Another image from Cassini’s Visual and Infrared Mapping Spectrometer on July 24, 2012, showing a sunlight reflection on a Titanian sea. Image Credit: Barnes et al./NASA/JPL/University of Arizona

Previously, Cassini has viewed the multiple seas and lakes near Titan’s north pole, as well as isolated sunlight glints, but the new views show both a cluster of seas/lakes and sunlight glints on them for the first time.

The images are near-infrared, this allows scientists to better see the surface through the hydrocarbon haze which perpetually shrouds the distant moon.

These images were taken by the Visible and Infrared Mapping Spectrometer (VIMS) on Cassini on Aug. 21. In this case, the sunlight glint was actually bright enough to saturate the detector in VIMS.

A “bathtub ring” can also be seen around the edges of Kraken Mare, the largest sea in the image with the reflecting sunlight, which indicates that it was previously larger, but has now partially evaporated with the changing seasons.

Also in the image are bright methane clouds near the north pole, the type which are thought to release liquid methane rain to the surface, another analogy to Earth’s hydrological cycle. The first image taken by Cassini of a sunlight glint on a sea on Titan, on July 8, 2009. Image Credit: NASA/JPL/University of Arizona/DLR

Along with the larger seas and lakes, dozens of smaller lakes have been found; most of the seas and lakes are located near the north pole, with a smaller number near the south pole, while Titan’s equatorial areas are mostly vast fields of sand dunes, again composed of hydrocarbons.

The seas and lakes have been imaged many times before by Cassini, as well as riverbeds leading into them, again just like on Earth. It is much too cold on the surface for liquid water, but the conditions are ideal for liquid methane and ethane. The seas and lakes also appear to be quite calm compared to some on Earth, with only very shallow waves detected. For the most part, they seem to be almost perfectly flat, appearing very dark in radar images taken by Cassini. Radar image of some of the many seas and lakes near Titan’s north pole. Image Credit: NASA/JPL

The Huygens probe, which landed on Titan in 2005, also had a good view of the landscape as it descended to the surface, which is both similar to and very different from what we know on Earth. The surface where Huygens landed, a currently dry riverbed, was still damp from relatively recent methane rains and was strewn with rocks and boulders made of solid water ice. While this riverbed was temporarily dry, others still flowing with liquid methane have been seen in many places on Titan.

While sharing many similarities in appearance with Earth, Titan is much colder than the coldest places on our planet, and may give clues to what the early Earth used to be like billions of years ago.

The Cassini spacecraft has been observing Saturn and its many moons since 2004, providing unprecedented views of the diverse worlds in the Saturnian system, including the seas and lakes of Titan, the water vapor geysers of Enceladus (likely originating from an underground ocean) and the “hexagon” cloud pattern surrounding Saturn’s north pole. The Cassini mission is scheduled to last until at least 2017, promising even more discoveries in the next few years.

This is absolutely incredible. Perhaps it is true that very highly advanced science is “magic” to some.