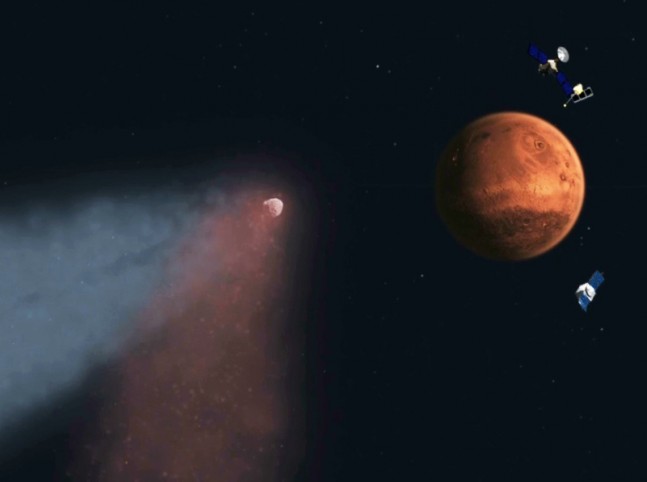 For the first time ever, the effects of a comet making a close flyby of Mars have been observed by spacecraft orbiting the Red Planet. The results of this event was announced at a media teleconference held on Friday, Nov. 7. As comet Siding Spring made its closest approach on Oct. 19, the Mars Atmosphere and Volatile Evolution (MAVEN ), Mars Reconnaissance Orbiter (MRO ), and Mars Express spacecraft turned their attention to the small icy body from the safety of their orbits, studying the comet itself as well as its effects on the Martian atmosphere.

As Jim Green, director of NASA’s Planetary Science Division in Washington explained, “This historic event allowed us to observe the details of this fast-moving Oort Cloud comet in a way never before possible using our existing Mars missions. Observing the effects on Mars of the comet’s dust slamming into the upper atmosphere makes me very happy that we decided to put our spacecraft on the other side of Mars at the peak of the dust tail passage and out of harm’s way.” Analysis of those effects revealed that debris from the comet (which resulted in a meteor shower) added a temporary but strong layer of ions to the Martian ionosphere. For the first time, scientists were able to make a direct connection between a specific meteor shower and this kind of transient ion layer in the atmosphere of any planet, even Earth. While Siding Spring itself safely passed by Mars, dust from the comet was vaporized in the upper atmosphere. Anyone on the ground likely would have seen an impressive meteor shower at the time.

The close encounter between the comet and Mars was also observed by various space and ground-based telescopes. At closest approach, at about 2:27 p.m. EDT (1827 GMT), Siding Spring passed within about 87,000 miles (139,500 kilometers) from Mars. That is less than half the distance between the Earth and Moon and less than one-tenth the distance of any known comet flyby of Earth. MAVEN, the most recent NASA spacecraft to arrive at Mars, along with India’s Mars Orbiter Mission (MOM) spacecraft, was able to study the comet in two different ways.

The remote-sensing Imaging Ultraviolet Spectrograph observed intense ultraviolet emission from magnesium and iron ions high in the atmosphere shortly after the meteor shower.

The emission was so strong, it dominated the ultraviolet spectrum for several hours after the comet had passed by before dissipating over the next two days. MAVEN also sampled some of the comet dust directly, showing eight different types of metal ions, including sodium, magnesium and iron present in the dust samples.

This is also the first direct analysis of dust from a comet originating from the Oort Cloud, a spherical region of comets and other material thought to be left over from the formation of the solar system billions of years ago. Spectrograms from the MARSIS instrument on the Mars Express orbiter showing the intensity of radar echo in Mars’ far-northern ionosphere at three different times on Oct. 19 and 20, 2014. Image Credit: ASI/NASA/ESA/JPL/Univ. of Rome/Univ. of Iowa

NASA’s MRO spacecraft also observed the comet with its High Resolution Imaging Science Experiment (HiRISE) camera, which showed the cometary nucleus to be smaller than the expected 1.2 miles (2 kilometers) diameter.

The images also revealed that the nucleus has a rotation period of eight hours, consistent with observations from the Hubble Space Telescope. MRO’s Shallow Subsurface Radar (SHARAD) was also able to detect the changes in the Martian ionosphere.

Passage of the radar signals through the temporary ion layer smeared the images taken; scientists used this to determine that the electron density of the ionosphere on the planet’s night side, where the observations were made, was five to 10 times higher than normal.

Finally, the Compact Reconnaissance Imaging Spectrometer for Mars (CRISM) on the spacecraft also observed the comet to try to find signs of any particular chemical constituents in its spectrum; as it turned out, the spectrum appeared to show a dusty comet with no strong emission lines at the sensitivity limit of the instrument.

As well as the two NASA orbiters, the European Space Agency’s Mars Express spacecraft also studied Siding Spring. The Mars Advanced Radar for Subsurface and Ionospheric Sounding (MARSIS) instrument detected a huge increase in the density of electrons following the comet’s closest approach. A few hours after, there was a huge jump in the electron density in the ionosphere, which occurred at a lower altitude than usual. This increase is thought to be caused by fine particles from the comet burning up in the Martian atmosphere.

All three spacecraft will continue to monitor the Martian atmosphere for any evidence of long-term effects from the comet’s passing. More visuals from the media teleconference are also available here.

I would be interested in any other updates if you would please and thank you.

Just a note:
it has been proven once again: the scientific community is lousy at english spelling & grammar. The most obvious example is in the “headline”: “THREE MARS ORBITERS OBSERVE COMET SIDING SPRING’S AFFECTS ON MARTIAN ATMOSPHERE.” “Affects” should be “Effects,” as it is the noun to properly use in this situation.

C’mon, people! I’m losing faith in the knowledge and smarts of the scientific community!

Regards,
The Old One

Should be “effects” not “affects”.

I thought one of the two components of the tail was created by solar wind, and always pointed AWAY from the sun… In the artists rendition shows both components trailing along the direction of travel, which should only happen when the comet is moving toward the sun. Judging by the lighting and shadows, that does not appear to be the case. If the sunlight is coming from the right, then shouldn’t the tail be trailing off to the left???

An artistic license allows for a lot of freedom in illustration, thank goodness.

Here is the incredible footage from an independent astronomer. https://www.youtube.com/watch?v=Sx3WdyOihH8&list=UUxz5R9YQMRW5QqElbAlMqRw&index=1

Paul – It’s Effects, not Affects. You got it right in the copy, but the headline and Google News Science section got it wrong. I suspect a careless headline writer/editor.

I’m here to comment on that “affects” business too. I fear as AI becomes smarter, real people are dumbing down.

Yeah, I too want to weigh in on what’s going here. There are a lot of folks with too much time on their hands, falling over themselves to criticize a writer – over a single letter in a single word.

If that causes one to “lose faith” in the scientific community – one might want to think about seeking professional help. Mistakes happen, we’re all human people – get some perspective.

Wow, all this attention for a simple typo… Yes, I do know the difference between “affects” and “effects” – it was just a typo which was easily fixed. Plus some health issues I’ve been working around. Sorry to all the perfect people out there. 😉

Just went outside and saw a little meteor shower myself

Thanks for that. Well written article.