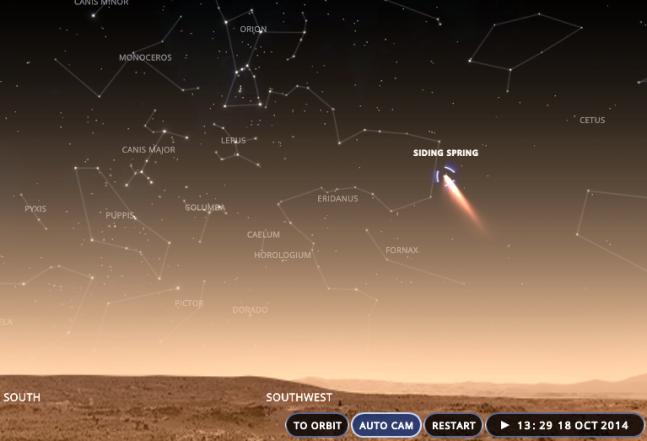 Thanks to the Solar System Scope app, you can get the best view of Comet Siding Spring. Image Credit: INOVE

Want to see the comet fly-by of the year, but you’re not actually on Mars to get the best view? Don’t worry. The Solar System Scope app is offering a thrilling visualization of comet Siding Spring (C/2013 A1) that is slated to give the Red Planet a close shave on Oct. 19, 2014. The simulation made by Slovakian company INOVE is offering a front-row seat, the same as NASA’s Curiosity rover has, to watch the stunning encounter.

“It visualizes comet as seen from Mars (location of Curiosity rover) during its close flyby on Oct. 19. Second view shows Siding Spring´s path through solar system,” Michal Sadlon of INOVE told astrowatch.net. INOVE is a three-person company based in Bratislava, Slovakia. The team consists of two developers and one graphic designer. Besides space models, the company develops multimedia applications and graphics solutions.

Comet Siding Spring, discovered on Jan. 3, 2013, from Australia’s Siding Spring Observatory, will pass by Mars only 132,000 km away, which would be like a comet passing about 1/3 of the distance between Earth and the Moon. The nucleus of the comet won’t hit Mars, but there could be a different kind of collision.

“We hope to witness two atmospheres colliding,” David Brain of the University of Colorado’s Laboratory for Atmospheric and Space Physics (LASP) said in August. “This is a once in a lifetime event!”

It will pass Mars at a relative velocity of 56 km/s (35 mi/s). As seen from Mars the comet will reach about apparent magnitude −6.
Observations of comet Siding Spring fly-by are planned using resources on Earth, orbiting Earth, on Mars and orbiting Mars. Now, at home, you can run the Solar System Scope app and see what it’s like to have a comet passing by so close. The application also contains models of planets, moons, dwarf planetes and comets. It also lets you explore the structure of planets. Second view of model represents night sky as you can see it from your location Earth and allows the user to search and learn constellation and stars.

The app uses HQ planetary textures for the better visual experience, control of entire model is very user-friendly and it doesn’t require installation.

INOVE revealed that during it’s 3 year history, the Solar System Scope homepage became one of the most visited space sites online and has also found its way to a great number of planetariums, museum installations and schools worldwide.

“All our models can be embedded on other websites and many observatories, educational institution and media used it, for example BBC, Discovery News, or Daily Telegraph. Model Transit of Venus even appeared on NASA SDO Transit of Venus website.” Sadlon said earlier this year. “We regularly create additional models for interesting astronomical events. In the past it was for example model dedicated to Transit of Venus 2012 with its trajectory across the solar disk, or last year’s Comet ISON model with trajectory and description of most interesting moments.”

So, take a seat, relax and enjoy the view. Comet Siding Spring is coming closer, so close, that it’s just one click away.

This article originally appeared on Astro Watch and can be viewed here: Comet Siding Spring

it was so nice to know that human is so adventurous