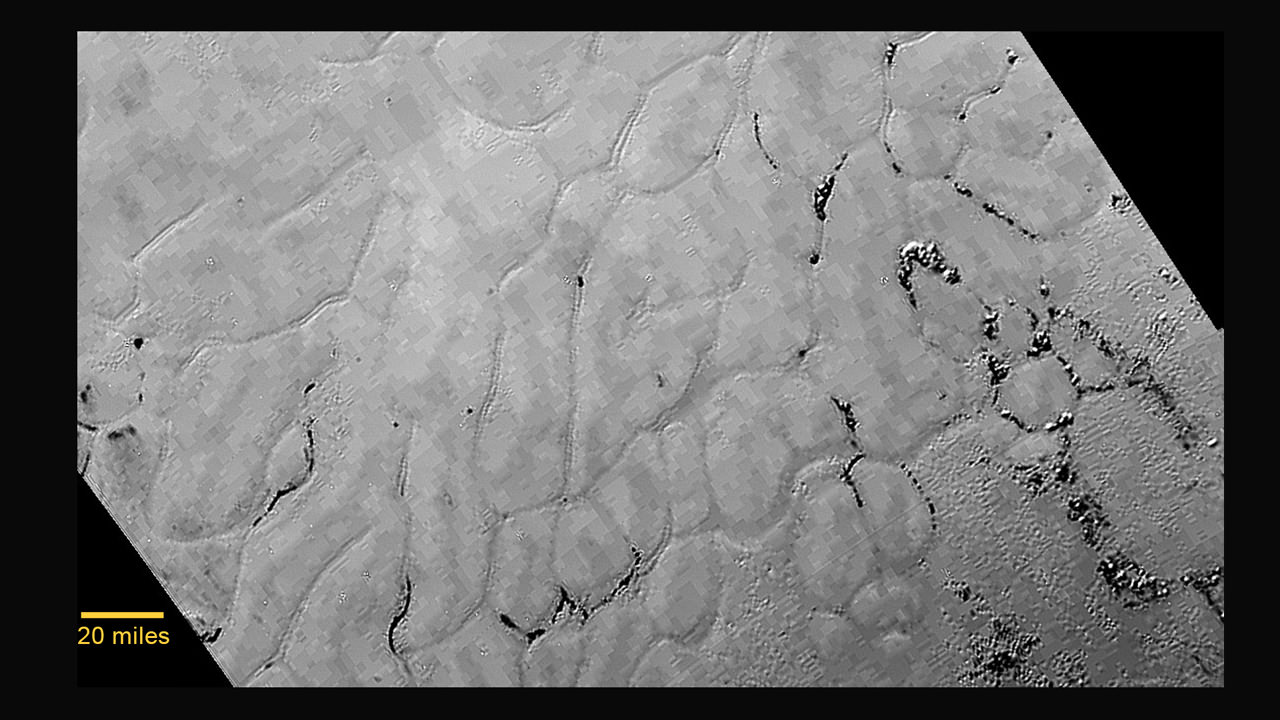 The unusual polygonal features seen in Sputnik Planitia, the left side of Pluto’s iconic heart feature known as Tombaugh Regio, could be caused by the sublimation of nitrogen ice, a team of scientists propose in a study published in the journal Nature.

Sublimation is a process in which a substance turns from solid into gaseous while bypassing the liquid state.

When the New Horizons spacecraft flew by Pluto in July 2015, it revealed unusually-shaped polygonal features in the 621-mile-wide (1,000-kilometer-wide) basin and impact crater known as Sputnik Planitia.

Scientists were surprised to find this basin is geologically active, which explains why it does not contain any impact craters. Geologically active areas undergo regular resurfacing of their terrains, obscuring such craters.

Led by Adrien Morison of the University of Exeter, an international team of scientists used computer modeling techniques to trace the origin of Sputnik Planitia’s polygonal features and found the sublimation of surface nitrogen ice appears to be powering convection, a process in which heat is transferred by the movement of heated fluid, causing colder, denser material to sink and hotter, less-dense material to rise.

The convection seems to be cooling the surface ice on Sputnik Planitia and is consistent with the size of the polygons and the area’s general topography.

“Pluto is still geologically active despite being far away from the Sun and having limited internal energy sources. The surface conditions allow the gaseous nitrogen in its atmosphere to co-exist with solid nitrogen,” Morison explained in a press release.

The study’s findings are consistent with other computer models of Pluto’s climate, which date the beginning of sublimation in Sputnik Planitia to sometime between one and two million years ago.

“We know that the surface of the ice exhibits remarkable polygonal features — formed by thermal convection in the nitrogen ice, constantly organizing and renewing the surface of the ice,” the authors say in the paper. “However, there remained questions behind just how this process could occur. We conducted a series of numerical simulations that showed the cooling from sublimation is able to power convection in a way that is consistent with numerous data coming from New Horizons — including the size of the polygons, the amplitude of topography, and surface velocities.”

The study’s authors propose that sublimation is also responsible for having created various landforms on Earth, Mars and other, smaller planets, such as Eris, Makemake and Neptune’s moon Triton in the outer solar system.

This particular hypothesis is just one possible explanation for Sputnik Planitia’s polygons. Previous studies have proposed that Pluto’s surface ice is warmed by interior heat produced by the radioactive decay of rock. This heating then causes upwelling followed by sinking of surface cells, producing the ridged, polygonal shapes.