Second group of names approved for features on Pluto 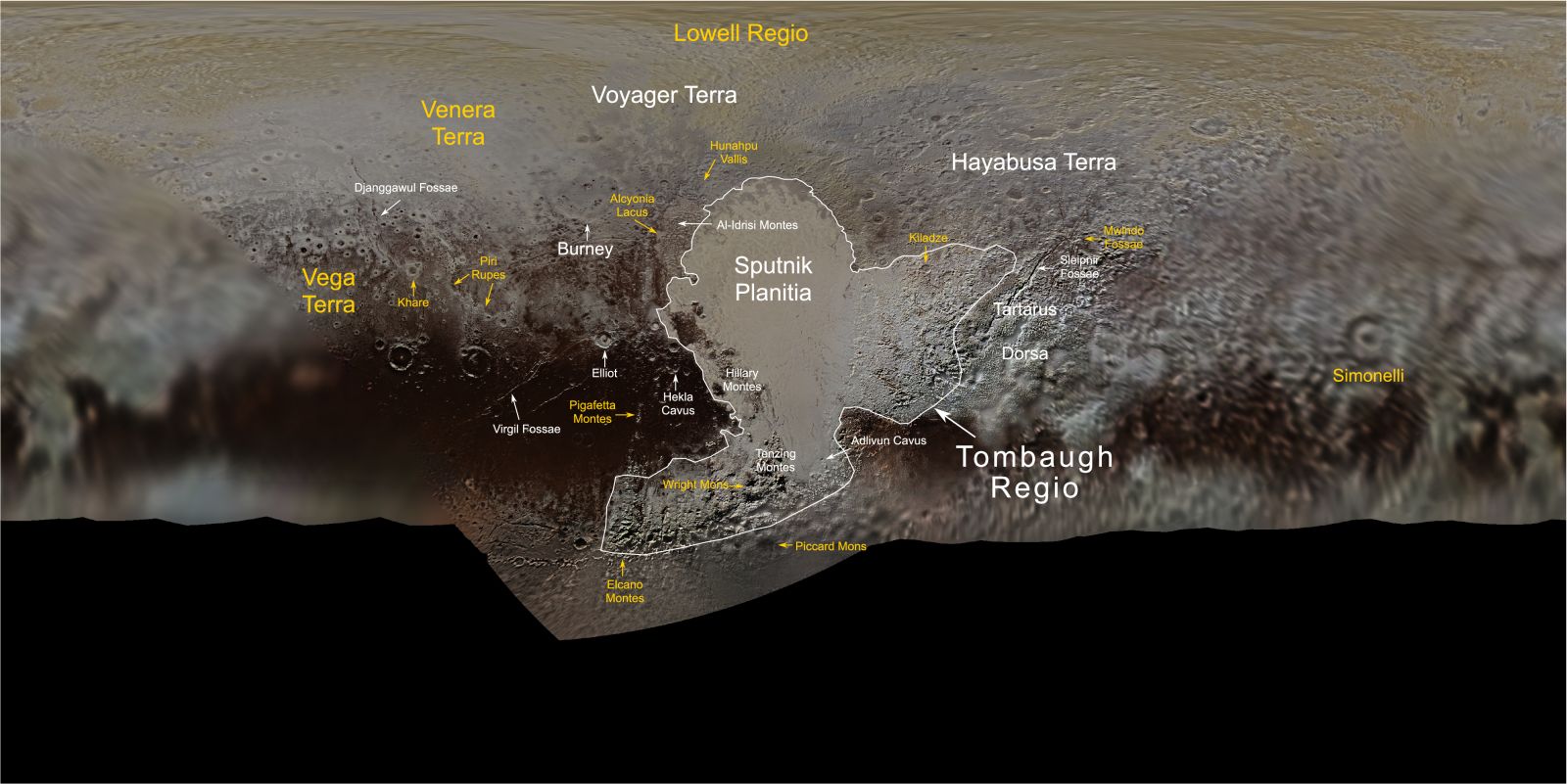 A composite of images collected by New Horizons’ instruments during the spacecraft’s July 2015 Pluto flyby, this annotated map shows the newly-approved names in yellow and the ones approved in 2017 in white. Image Credit: NASA/JHUAPL/SwRI/Ross Beyer

A second set of names for features on Pluto, already used informally by members of NASA’s New Horizons mission, has received formal approval by the International Astronomical Union (IAU), the organization that names celestial objects and their features.

Submitted by the New Horizons mission, these 14 names honor pioneering explorers on Earth, space missions, scientists and engineers who have studied Pluto and the Kuiper Belt, and underworld mythology. Like the first set of 14 names for various features on Pluto’s surface, which were approved in 2017, all of these came from a 2015 public naming campaign organized jointly by the New Horizons mission, the SETI Institute, and the IAU.

Participants could vote for names from a list of nominations suggested by the organizers or nominate a name of their choosing under the established categories.

In 2018, the IAU approved a set of names submitted by the New Horizons mission for features on Charon, which had also been selected via the public campaign. Themes for features on the large moon included destinations and milestones of fictional space and other exploration; fictional and mythological vessels of space and other exploration; and fictional and mythological voyagers, travelers, and explorers.

Tombaugh Regio, the name assigned to Pluto’s iconic heart feature, was among the initial set of names approved in 2017, in honor of Pluto discoverer Clyde Tombaugh. The new list of names includes Lowell Regio, given to a large region above the heart feature, in honor of Percival Lowell, who founded the Lowell Observatory, where Pluto was discovered in 1930, and initiated the search for a planet beyond Neptune in the early 1900s.

The following names were approved for Pluto’s many regions, mountain ranges, craters, valleys, and plains:

Alcyonia Lacus, a possible frozen nitrogen lake on Pluto’s surface, is named for the bottomless lake in or in the vicinity of Lerna, a region of Greece known for springs and swamps; the Alcyonian lake was one of the entrances to the underworld in Greek mythology.

Elcano Montes is a mountain range honoring Juan Sebastián Elcano (1476–1526), the Spanish explorer who in 1522 completed the first circumnavigation of the Earth (a voyage started in 1519 by Magellan).

Hunahpu Valles is a system of canyons named for one of the Hero Twins in Mayan mythology, who defeated the lords of the underworld in a ball game.

Khare crater honors planetary scientist Bishun Khare (1933–2013), an expert on the chemistry of planetary atmospheres who did laboratory work leading to several seminal papers on tholins – the organic molecules that probably account for the darkest and reddest regions on Pluto.

Lowell Regio is a large region honoring Percival Lowell (1855–1916), the American astronomer who founded Lowell Observatory and organized a systematic search for a planet beyond Neptune.

Mwindo Fossae is a network of long, narrow depressions named for the Nyanga (Eastern Dem. Rep. Congo/Zaire) epic hero who traveled to the underworld and after returning home became a wise and powerful king.

Piccard Mons is a mountain and suspected cryovolcano that honors Auguste Piccard (1884–1962), a 20th century inventor and physicist best known for his pioneering balloon flights into Earth’s upper atmosphere.

Pigafetta Montes honors Antonio Pigafetta (c. 1491–c. 1531), the Italian scholar and explorer who chronicled the discoveries made during the first circumnavigation of the Earth, aboard Magellan’s ships.

Piri Rupes is a long cliff honoring Ahmed Muhiddin Piri (c. 1470–1553), also known as Piri Reis, an Ottoman navigator and cartographer known for his world map. He also drew some of the earliest existing maps of North and Central America.

Vega Terra is a large land mass named for the Soviet Vega 1 and 2 missions, the first spacecraft to fly balloons on another planet (Venus) and to image the nucleus of a comet (1P/Halley).

Venera Terra is named for the Venera missions sent to Venus by the Soviet Union from 1961–1984; they included the first human-made device to enter the atmosphere of another planet, to make a soft landing on another planet and to return images from another planetary surface.

I had thought, those who discover are entitled to name the features – and they do. The International Astronomical Union (IAU), at best, just “rubber stamps” the names chosen therein. A cataloging function at most.