Scientists speculate about the origins of Ultima Thule’s surface features 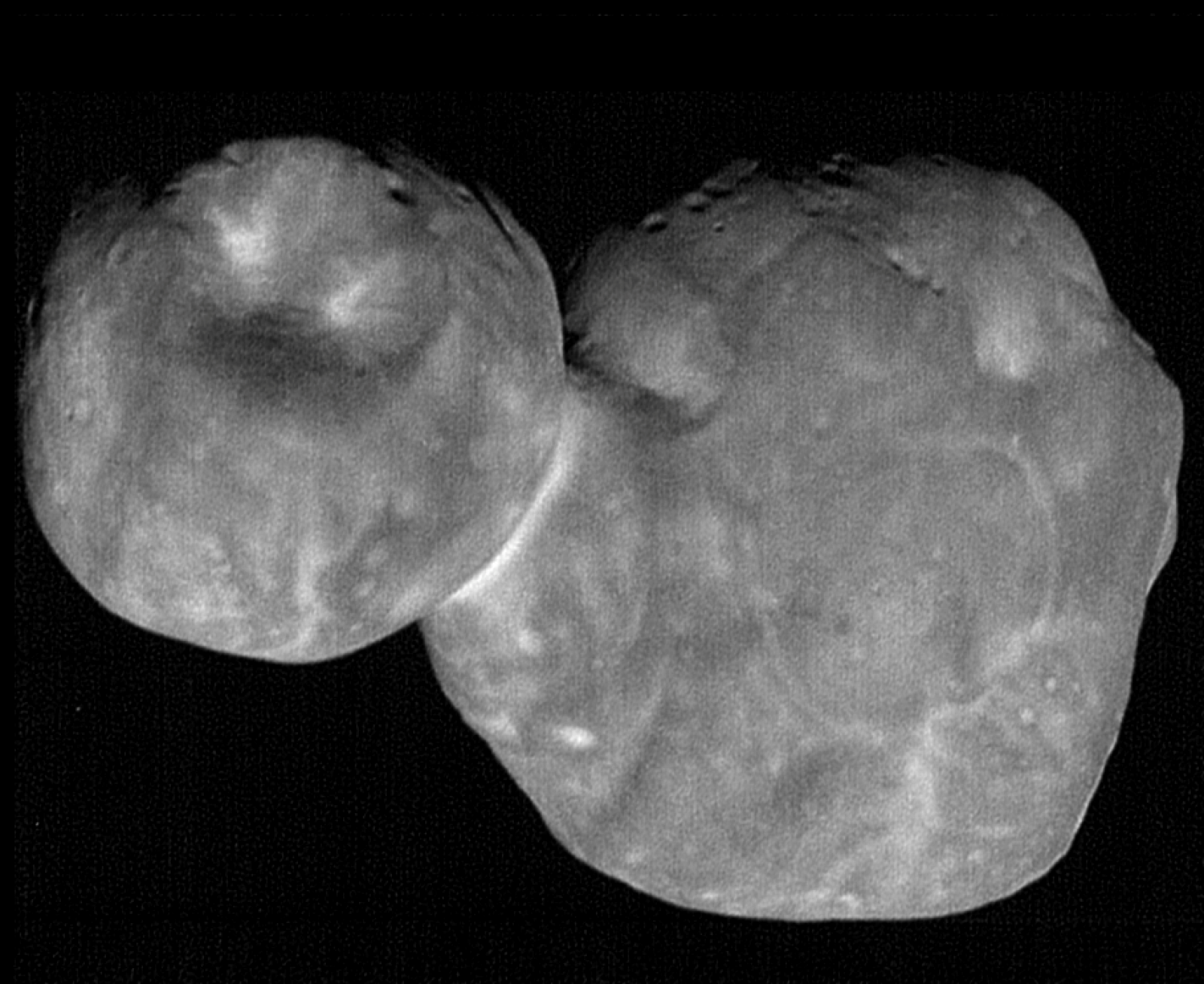 In a public presentation livestreamed online from the 50th Lunar and Planetary Science Conference in The Woodlands, Texas, scientists on NASA’s New Horizons team speculated as to the origins of the Kuiper Belt Object’s surface features and markings, as well as its unusual and unexpected shape.

The New Horizons spacecraft flew within 2,200 miles (3,500 kilometers) of Ultima Thule—located one billion miles (1.6 billion kilometers) beyond Pluto—on Jan. 1, 2019. While initial data returned at the time of the flyby suggested the KBO is shaped like a snowman, later images sent back in February indicate the 22-mile (35-kilometer) long, double-lobed object is composed of one large, flat lobe, which mission scientists have nicknamed “Ultima,” and another smaller but more-round lobe, which they have nicknamed “Thule.”

In addition to being the farthest object ever explored by a spacecraft and the first primordial contact binary object ever studied up close, Ultima Thule continues to puzzle scientists with its strange shape.

“We’ve never seen anything like this anywhere in the solar system,” said mission Principal Investigator Alan Stern of the Southwest Research Institute (SwRI) in Boulder, Colorado. “It is sending the planetary science community back to the drawing board to understand how planetesimals—the building blocks of planets—form.”

Scientists believe Ultima Thule’s two lobes were originally separate and orbited each other before finally undergoing a “gentle” merger that did not involve an impact. The lighter-colored “neck” that holds the two lobes together is a relic of the ancient merger, which took place during the solar system’s earliest era of accretion and planet formation. Markings on the “neck” could hold clues to the merging process.

“This fits with general ideas of the beginning of our solar system,” McKinnon sait. “Much of the orbital momentum of the Ultima Thule binary must have been drained away for them to come together like this. But we don’t know yet what processes were most important in making that happen.”

While current available data shows no sign of Ultima Thule having any satellites, the majority of the flyby data is still on the spacecraft, and mission scientists are not ready to rule out the existence of one or more small moons.

Ultima Thule’s surface features include bright and dark patches, hills, troughs and craters. Its largest crater, nicknamed “Maryland Crater,” is located on the smaller lobe and has a diameter of five miles (eight kilometers). Mission scientists are uncertain as to whether Maryland and the smaller craters formed via impacts or through internal processes.

Pit craters, for example, are formed when ice sublimates directly into gas, leaving pits behind, as well as when materials on the surface drain into subterranean cracks.

Like Pluto and many smaller KBOs, Ultima Thule has a red color, which scientists first observed using the Hubble Space Telescope. Its red color is darker than Pluto’s, typical for KBOs in Ultima Thule’s region, which is known as the “cold classical Kuiper Belt.” Objects in this region have orbits that are largely circular; both their orbits and composition have stayed the same since the solar system’s earliest years.

The red color is likely produced by tholins, organic compounds formed from the interaction of solar radiation with simple carbon-containing compounds, including carbon dioxide, methane and ethane, often combined with water and nitrogen.

“This is the first time one of these ultra-red objects has been explored, and our observations open all kinds of new questions,” Howett said. “The color imaging even reveals subtle differences in coloration across the surface, and we really want to know why.”

Ultima Thule has a spectrum much like that of other objects in the outer solar system and mission scientists have already found evidence the KBO’s surface contains water ice, methanol, and organic materials, Protopapa said.

Using a sequence of images taken on approach to Ultima Thule, computer-generated images, and a parting view of the KBO captured just 10 minutes after closest approach, mission scientists created a short movie showing the target go from a dot in a star field to the now famous double-lobed object it is, to a crescent at the spacecraft’s departure. Queen guitarist and New Horizons team member Brian May added the soundtrack, which includes a quote by the late Stephen Hawking.