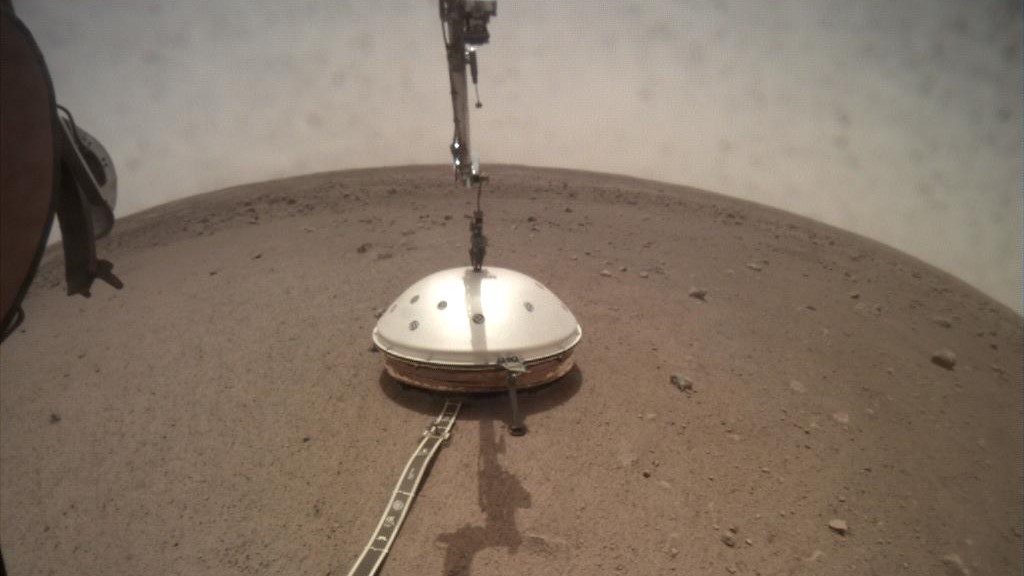 NASA’s InSight lander deployed its Wind and Thermal Shield on sol 66 — Feb. 2, 2019. The shield covers the lander’s seismometer, which was set down onto the Martian surface on Dec. 19, 2018. Over 2.5 years later, data from the seismometer have shown Mars’ center to be molten. Credit: NASA/JPL-Caltech

Using data collected by NASA’s Mars InSight lander, which has been on the red planet since 2018, researchers have confirmed the planet’s center to be molten.

This comes from three papers published in “Science” on July 22, 2021, that used data collected by InSight’s seismometer to provide details previously unknown about the composition of Mars’ crust, mantel and core, confirming the planet has a molten center, whereas Earth’s outer core is molten and its center is solid.

“When we first started putting together the concept of the mission more than a decade ago, the information in these papers is what we hoped to get at the end,” said InSight’s principal investigator Bruce Banerdt of NASA’s Jet Propulsion Laboratory in Southern California, who leads the mission. “This represents the culmination of all the work and worry over the past decade.”

Previous orbiters and rovers were focused on studying the Red Planet’s surface, part of InSight’s mission was to measure the depth, size and structure of the planet’s three layers, the crust, mantle and core.

NASA’s Insight spacecraft, part of the Science Mission Directorate managed by JPL, touched down in 2018 and the stationary seismometer on the lander is revealing details about Mars’ interior.

Scientists plan to continue studies of InSight’s data to find support as to whether the same composition as Earth holds true for the red planet as well as listening to seismic events from hundreds to thousands of miles away with the spacecraft’s seismometer called the Seismic Experiment for Interior Structure, SEIS.

According to NASA, the lander has recorded over 733 marsquakes between the magnitudes of 3.0 and 4.0, contributing valuable data to the Science Mission Directorate.

The focus of each one of the three papers in Science was uniquely centered on the three distinct layers of Mars and their formation.

Mars heated up as it formed, just as Earth did, using dust and lumps of meteorite material that orbit the sun as part of the early solar system before separating into three distinct layers through a process called differentiation. Those three layers are the crust, mantle and core.

Seismologists hope to increase our level of understanding of how all rocky planets, including Earth, were formed by studying Mars’ inner structure through seismic waves varying in different speeds and depths inside the red planet.