The bright spots in Ceres’s Occator Crater, which mystified scientists when first observed by the Dawn spacecraft in 2015, indicate the dwarf planet may harbor remnants of what was once a global subsurface ocean.

Dawn captured closeup, detailed images of the 57-mile- (92 km-) wide crater from a distance of just 22 miles (35 km) above the dwarf planet’s surface. After analyzing these images, scientists identified the deposits as sodium carbonate, a compound of sodium, carbon, and oxygen contained in salt water that erupted onto Ceres’s surface. That water subsequently evaporated, leaving behind the bright salty deposits.

Mission scientists determined the deposits originated in a deep, global underground ocean of salty water. Based on Ceres’s gravity, they analyzed its internal structure and concluded its subsurface ocean is several hundred miles wide and around 25 miles (40 km) deep.

Ceres is the only dwarf planet located in the asteroid belt between Mars and Jupiter, but some scientists believe it originated in the Kuiper Belt beyond Neptune and Pluto and either migrated or was hurled inward.

The presence of a subsurface ocean puts Ceres into the growing number ocean worlds in the solar system, including Jupiter’s moons Europa and Ganymede, Saturn’s moons Titan and Enceladus, Neptune’s moon Triton, and Pluto. All except Earth have their oceans below their surfaces.

While the ocean worlds that are satellites of gas giants are heated by tidal forces from their parent planets, Ceres, like Pluto, has no external heat source. This is why some computer models indicate the ocean that once existed has subsequently frozen over. 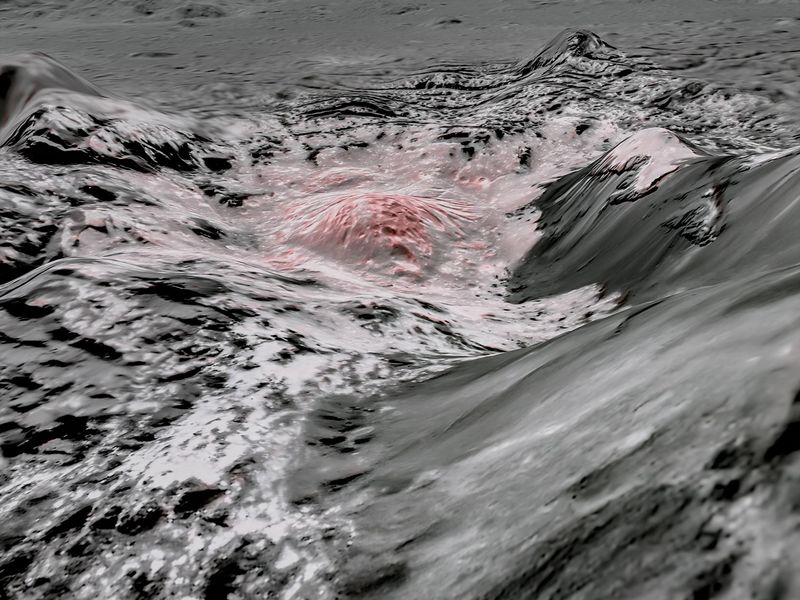 However, five years of studying surface features around the craters have led researchers to believe the dwarf planet still harbors a salty liquid ocean below its surface.

“Past research revealed that Ceres had a global ocean, an ocean that would have no reason to exist [still] and should have been frozen by now. These latest discoveries have shown that part of this ocean could have survived and be present below the surface,” Dawn team member Maria Cristina De Sanctis of the National Institute of Astrophysics in Rome told Astronomy magazine.

“If future missions can confirm the results, it will mean that there’s a very salty, very muddy body of liquid somewhere around the size of Utah’s Great Salt Lake on a dwarf planet that’s just 590 miles (950 km) across–roughly the size of Texas,” she said.

The water’s high salt content could be preserving the liquid ocean by lowering its freezing point. Additionally, Ceres’s water contains hydrates, which trap gas and salt, changing the way heat flows within a planet’s crust.

Occator Crater is not the only place on Ceres with bright salt deposits. Dawn photographed similar bright spots on the smaller Haulani Crater.

Researchers also determined that Ceres’s bright spots are young, some less than two million years old. Because the dwarf planet is regularly hit by micrometeorites, its surface should be dark. The presence of bright spots suggest it is still experiencing geologic activity, causing eruptions from the subsurface.

Salts containing water normally dehydrate quickly on Ceres. Yet analysis of the bright spots indicates they still have some water content, meaning they were deposited very recently. 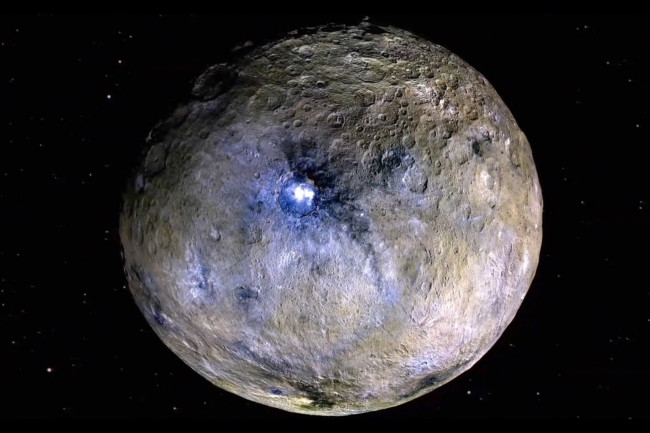 Discovery of organic materials on Ceres suggests it could potentially harbor microbial life in its still existing underground ocean. The Dawn team therefore chose to place the spacecraft in a long duration orbit around the dwarf planet to avoid contaminating it with microbes from Earth.

“Oceans should be common features of dwarf planets based on what New Horizons learned at Pluto and Dawn at Ceres,” Dawn project scientist Julie Castillo-Rogez of NASA’s Jet Propulsion Laboratory (JPL) said in an interview with Astronomy magazine.

Earlier this month, she submitted a study for publication proposing a $1 billion followup NASA mission to land on Ceres’s surface. The European Space Agency (ESA) is also considering a return mission.

A series of articles about Occator Crater and geological activity on and beneath Ceres’s surface have been published in the journals Nature Astronomy, Nature Geoscience, and Nature Communications.