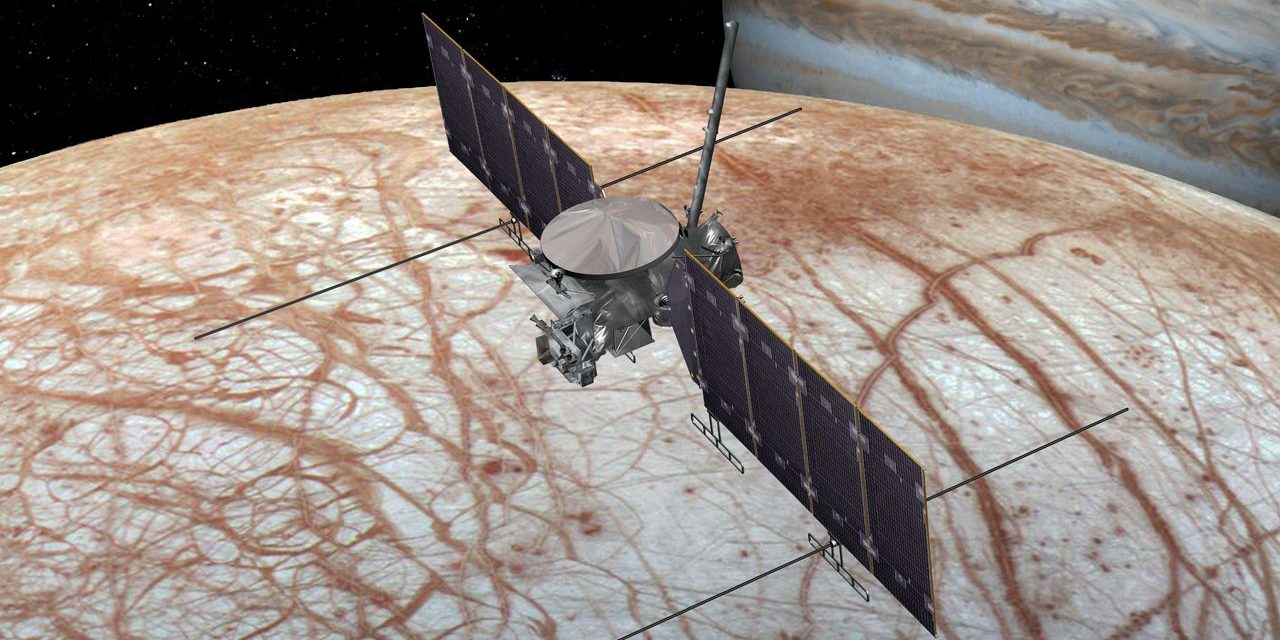 An artist’s rendering of the Europa Clipper spacecraft flying past Europa, one of Jupiter’s four largest moons. The mission is being developed for a launch sometime in the 2020s. Image Credit: NASA/JPL-Caltech

A prototype of the high-gain antenna (HGA) that will transmit images and data for NASA’s Europa Clipper mission is currently being tested at an indoor electromagnetic testing facility known as the Experimental Testing Range (ETR), located at the space agency’s Langley Research Center in Hampton, Virginia.

Scheduled to launch in 2023, the Europa Clipper mission is being designed to study Jupiter’s moon Europa via close flybys that are planned to be conducted from a long and looping orbit around the giant planet.

Europa is one of the Solar System’s top potential locations for hosting microbial life. Beneath its icy shell is a subsurface ocean from which plumes of water vapor were first detected by the Hubble Space Telescope in 2012. The radiation-tolerant spacecraft is expected to fly through Europa’s thin atmosphere, using a thermal instrument to search for warmer water that could be the source of the plumes. 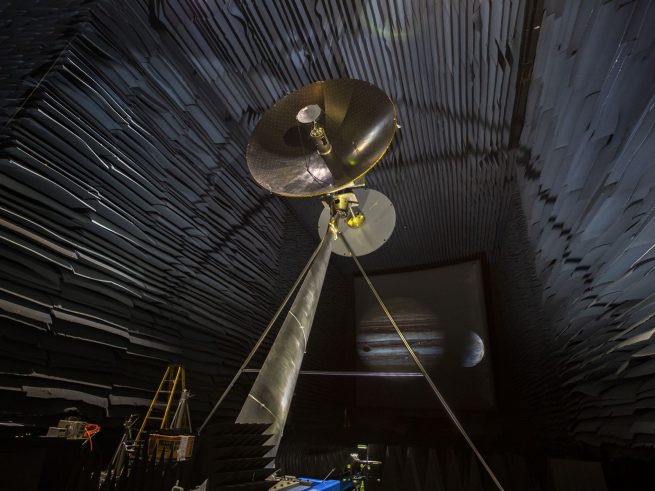 A full-scale prototype of the high-gain antenna expected to be used for the Europa Clipper mission is being tested at the Experimental Test Range at NASA’s Langley Research Center in Virginia. Photo Credit: NASA/Langley

Scientists hope the spacecraft’s instruments will shed light on the composition of the underground ocean and plumes.

A total of 45 flybys are planned to be conducted around Europa at altitudes ranging from 1,675 miles (2,700 kilometers) to just 16 miles (25 kilometers). From Jupiter orbit, the HGA is designed to return data collected about Europa by the spacecraft’s science instruments.

The 10-foot (3-meter) tall HGA prototype, which is the same size as the actual instrument will be, is currently undergoing tests of its antennas, receivers, transmitters, electromagnetic components, subsystems, and high pointing accuracy.

“Several years ago, we scoured the country to find a facility that was capable of making the difficult measurements that would be required on the HGA and found that the ETR was it,” said Europa Clipper assistant project manager Thomas Magner of the Applied Physics Laboratory (APL) in a news release. “The measurements that will be performed in the ETR will demonstrate that the Europa Clipper mission can get a large volume of scientific data back to Earth and ultimately determine the habitability of Europa.”

The ETR is ideal for such testing because it is a scientifically controlled environment. While the current round of HGA tests is nearly complete, a second round is already planned there for 2020.

Managed by NASA’s Jet Propulsion Laboratory, the Europa Clipper is expected to take between three and seven years to reach the Jupiter system, depending on the vehicle that launches it and planetary alignments that could speed it up through gravity assists.

The spacecraft will carry cameras and spectrometers, which is expected to yield high-resolution images of Europa’s surface and identify that surface’s composition. Using ice-penetrating radar, it is designed to measure the thickness of the moon’s icy shell and search for underground lakes like those below Antarctica on Earth. Through its magnetometer, which will study Europa’s magnetic field in terms of strength and direction, the spacecraft will enable scientists to learn the salinity and depth of the underground ocean.

“This is a giant step in our search for oases that could support life in our own celestial backyard,” said program scientist Curt Niebur of NASA Headquarters in Washington, DC. “We’re confident that this versatile set of science instruments would produce exciting discoveries on a much-anticipated mission.”