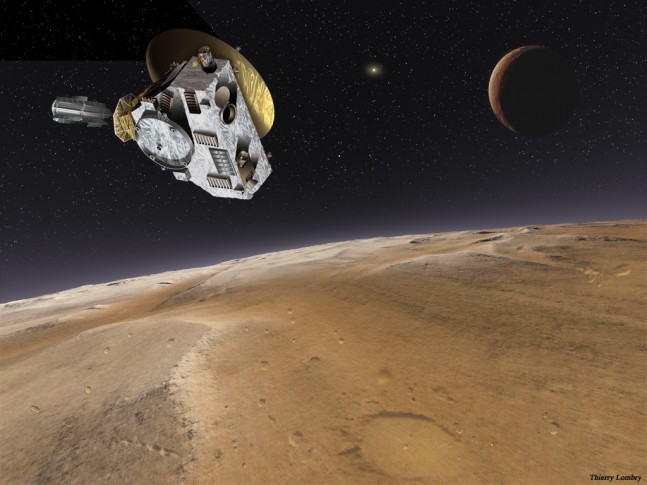 NASA's New Horizons spacecraft passes by the dwarf planet Pluto and one of its moons in this artist's depiction. Image Credit: NASA

Pluto’s small moons orbit their parent world chaotically, with Nix and Hydra wobbling and tumbling, according to a new study by Dr. Marc Showalter, senior research scientist at California’s SETI Institute, and Dr. Douglas Hamilton, an astronomy professor at the University of Maryland in College Park. These findings come at a time when NASA’s New Horizons spacecraft is rapidly approaching the dwarf planet and its flock of mysterious moons.

Showalter and Hamilton began studying Hubble images of the Pluto system in June of 2011 in an effort to uncover the reasons Nix and Hydra seem to brighten and darken as they orbit Pluto. NBC News detailed how the duo’s observations led to the discovery of two new Plutonian moons – Kerberos in 2011 and Styx in 2012.

The researchers were surprised to discover that the small moons tumble chaotically in their orbits, which they attributed to the fact that they are circling two objects rather than one.

Nix and Hydra have elongated football-like shapes. Kerberos, which orbits between Nix and Hydra, is likely to have a similar shape, as is Styx. Kerberos and Styx likely have chaotic orbits similar to those of Nix and Hydra.

“Hubble has provided a new view of Pluto and its moons, revealing a cosmic dance with a chaotic rhythm,” stated Dr. John Grunsfeld, associate administrator for NASA’s Science Mission Directorate. “When the New Horizons spacecraft flies through the Pluto system in July, we’ll get a chance to see what these moons look like up close and personal.”

“If you lived on Nix or Hydra, you would not know if the Sun is coming up tomorrow,” Showalter stated.

Grunsfeld, Showalter, and Hamilton, along with Southwest Research Institute scientist Dr. John Spencer, a leader of the New Horizons team, and Dr. Heidi Hammel, executive vice president of the Association of Universities for Research in Astronomy, discussed the bizarre, unexpected findings during a June 3 NASA news teleconference.

The event highlighted the publication of Showalter and Hamilton’s findings in the June 4 issue of the journal Nature. While most moons within the Solar System orbit their parent planets in a synchronous lock, almost always presenting the planet with the same face, Pluto’s small moons do not do this, Showalter said.

Measurements of the tiny natural satellites, which can be determined from their brightness, showed Nix and Hydra are not in synchronous orbits. To date, the scientists cannot obtain similar measurements of the smaller Kerberos and Styx.

Using the Hubble data, the researchers were able to learn the moons’ shapes, sizes, and colors. They found that like Charon, Nix and Hydra are very bright, reflecting approximately 40 percent of the sunlight that hits them. Styx is too small for its brightness to be determined.

The real surprise of this study was Kerberos – which is so dark it only reflects four percent of the sunlight that hits it.

All of Pluto’s moons are presumed to have formed together when a large object impacted proto-Pluto in the early days of the Solar System. This means all six objects in the system are likely made of the same materials, making it that much more puzzling that Kerberos is so black, while Nix and Hydra are bright.

“It is hard to understand why one is a charcoal briquette orbiting between two snowballs,” Showalter said.

One possible explanation is that a dark Kuiper Belt Object impacted a bright proto-Pluto, producing a heterogeneous debris cloud, with Charon forming from the inner part of the cloud.

Significantly, Hydra, Styx, and Kerberos orbit Pluto and Charon in a resonance, meaning there is an exact ratio between their orbital periods. Hydra orbits Pluto three times for every two orbits of Styx.

While Styx and Hydra can line up with each other at various locations, they will never line up with Nix, Hamilton explained. “The resonance prevents the small moons from all getting close together at the same time, stabilizing the system.”

Without the presence of Charon, the small moons would likely follow nearly circular orbits, Hamilton noted. The presence of Charon makes them follow wobbly orbits in distorted shapes. The small moons take several weeks to orbit the center of gravity or barycenter, between Pluto and Charon. Each time Charon passes one of them, it causes that moon to oscillate, destabilizing the entire system.

Interestingly, the Pluto system can be seen as an analog of Jupiter and the Galilean moons. Three of those four moons, Io, Europa, and Ganymede, orbit Jupiter in the same resonance, repeating the same cycle again and again.

Like Pluto’s small moons, all four Galilean moons never all line up at the same time. This configuration helps stabilize their orbits by minimizing the gravitational strengths between the satellites, Hamilton explained. New Horizons should be able to provide a clearer view of some of Pluto’s moons. Image Credit: NASA

Spencer discussed New Horizons’ role in the context of these findings. The spacecraft will take images of Nix and Hydra 50 to 100 pixels across, which will reveal a lot about their compositions and surfaces.

The images of Kerberos and Styx will not be as detailed but will be good enough to illustrate their shapes and brightness.

The spacecraft will also look for additional moons, both to avoid potential hazards and to create a complete picture of the way the worlds within the system interact with one another.

“New Horizons will revolutionize our knowledge of these moons, of their sizes, shapes, and behaviors,” Spencer said.

While Hamilton compared the Pluto system to Jupiter and its four large moons, Hammel described it as an analog to a binary star system. Such systems are known to be ubiquitous, and many have planets orbiting them. Like the fictional world Tatooine of the Star Wars series of movies, these are known as “circumbinary planets”.

“Pluto’s results can help us understand these exoplanets,” Hammel said. “We will someday be able to apply the same tools and techniques to study exoplanets around other stars. All this is grounded in these four moons in chaotic orbits seen by Hubble.”

Hammel also emphasized the significance of scientists learning so much about objects that, even with Hubble, appear only as points of light.

“We can’t imagine the details we’ll see” in only six weeks when New Horizons flies by Pluto, she said, noting data will be coming back from the encounter for the next year.