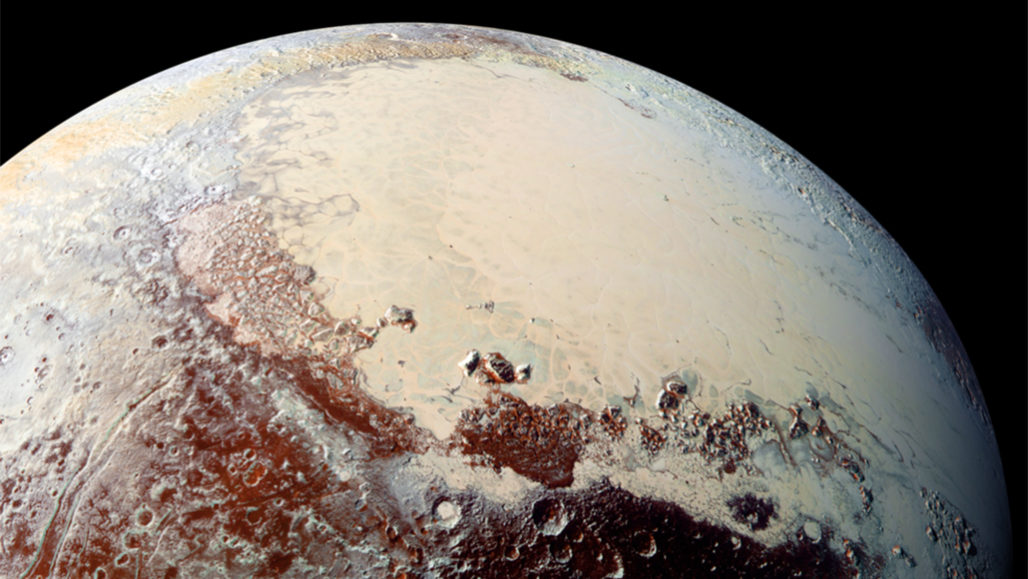 Sputnik Planitia, the impact basin that makes up the left side of Pluto’s heart feature. Image Credit:SWRI, JHUAPL, NASA

Two new studies of data collected by the New Horizons spacecraft during its 2015 Pluto flyby suggest the dwarf planet has a deep subsurface ocean that may have been present all 4.5 billion years of Pluto’s existence.

Sputnik Planitia, the left side of Pluto’s famous heart feature, was formed by a Kuiper Belt Object (KBO) that impacted Pluto in the early years of the solar system. Lines visible on the opposite side of Sputnik Planitia may have been produced by shock waves from that impact and suggest ancient Pluto had an underground ocean at least 93 miles (150 km) thick.

A report on the first study was supposed to be presented at this year’s Lunar and Planetary Science Conference in Woodland, Texas, in mid-March. That conference as canceled due to the coronavirus crisis. The second study was published in October 2019.

The presence, age, and origin of a large subsurface ocean on Pluto puts the small planet in the growing list of underground ocean worlds that could harbor microbial life, such as Jupiter’s moon Europa, Saturn’s moons Titan and Enceladus, dwarf planet Ceres, and Neptune’s moon Triton. It also raises the possibility that other dwarf planets in the Kuiper Belt may have similar underground oceans that could also harbor microbial life, transforming scientists’ notion of what constitutes a star’s habitable zone.

That “transforms the way we think about the Kuiper Belt,” stated planetary scientist Adeene Denton of Purdue University in Indiana.

Data and images collected by New Horizons strongly suggests the existence of a liquid water ocean beneath Pluto’s icy shell. Interaction between that water and elements in Pluto’s rocky core could produce the nutrients and energy capable of sustaining microbial life.

“If there is an ocean today, it raises the question of, when did that ocean get there,” questioned Carver Bierson, a planetary scientist at the University of California at Santa Cruz, who served as lead author of the study that was supposed to be presented at this month’s conference.

He and the other scientists who conducted the study sought to determine how long Pluto’s subsurface ocean has existed and whether its liquid water has undergone total or partial re-freezing throughout the last 4.5 billion years.

The researchers considered two possibilities. One is that Pluto began as a very cold world, with all of its subsurface water frozen. Heat produced by the decay of radioactive elements likely melted that water, initiating a cycle in which it partially froze again, then melted numerous times.

If this scenario is true, cracks and ripples should be visible along Pluto’s icy shell, produced by the repeated contraction when the ice melted and expansion when it froze. Contraction would cause melting ice to crumble into mountains while expansion would produce faults and valleys by stretching the ice.

The second possibility is that Pluto began as a warm world, at least warm enough for its subsurface ocean to have existed as liquid water over the past 4.5 billion years. In this scenario, the only cracks visible on Pluto’s surface would be those caused by the underground ocean’s expansion as it underwent partial freezing.

Images taken by New Horizons confirm the second scenario, that Pluto has had a liquid subsurface ocean since its earliest days, Bierson said.

These dark lines on Pluto’s surface directly opposite Sputnik Planitia may be the result of ripples produced by an object that impacted the basin. Image Credit: New Horizons Team

In the second study, scientists examined both Sputnik Planitia and the surface of Pluto directly opposite it. While the latter was imaged only in low resolution due to the quick flyby, rendering the images somewhat fuzzy, the researchers could still make out lines in this area. These could have formed from shock waves generated by the giant impact that created Sputnik Planitia.

For the impact to have produced the lines seen on the side of Pluto directly opposite Sputnik Planitia, Pluto would need to have had a deep ocean at minimum 93 miles (150 km) thick, Denton explained.

“If the impact is large enough…the planet can act like a lens, and focus the wave energy at the exact opposite point on the planet from the impact,” she said.

Also needed for the creation of surface lines seen opposite Sputnik Planitia is a mineral-rich rocky core. Interactions between this core and subsurface liquid water could have allowed microbial life to develop and take hold there.

If a future mission to Pluto, including a lander, finds evidence of such life, there is a strong possibility that other small planets in the Kuiper Belt are also habitable, emphasized New Horizons planetary scientist James Tuttle Kean of NASA’s Jet Propulsion Laboratory (JPL) in California. Kean was not involved in either study.