Perseverance rover begins driving across the surface of Mars 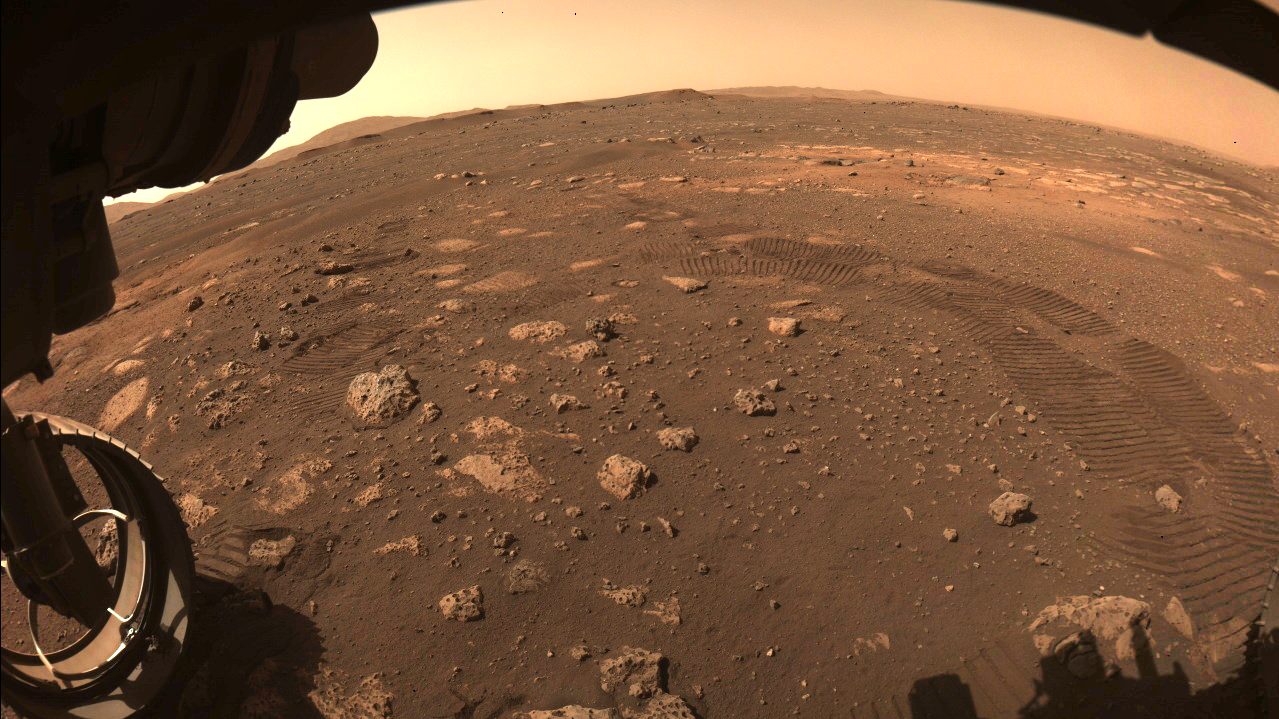 An image from one of Perseverance’s Hazard Avoidance Cameras shows rover tracks from its first short travers across the surface. Credit: NASA/JPL-Caltech

In the weeks since NASA successfully landed its Perseverance rover on the surface of Mars, the images, science and sounds that have come from the mission have proven to be groundbreaking.

A few days after touchdown, NASA shared incredible imagery from the landing of Perseverance; giving the public dramatic video footage of the complexities of a Mars landing without having to rely on engineering renderings.

In addition to the initial videos provided from the landing, Perseverance has also beamed over 9,000 images from its incredibly-advanced suite of cameras and imaging tools; the most high-tech of any rover ever built by NASA. 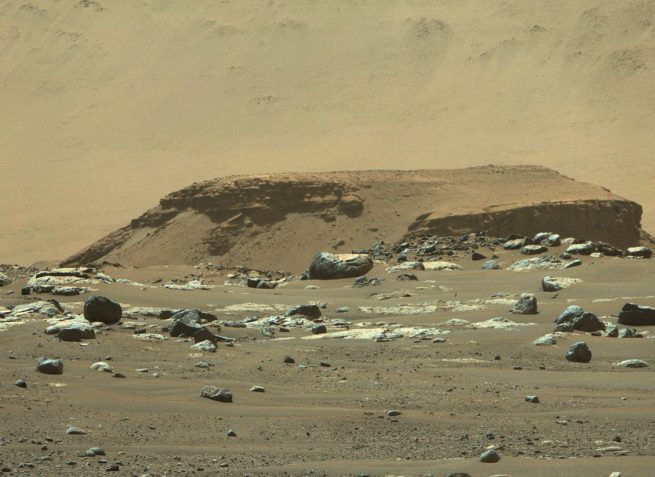 A view of one of the many features in Jezero crater that scientists are eager to drive toward. NASA/JPL-Caltech

Engineers at NASA’s Jet Propulsion Laboratory have spent the last few weeks powering up the rover and making sure all of its onboard systems are functioning properly, including taking it for a spin around the red planet.

On March 4, the JPL team brought the rover to life by taking it on its first powered drive on the surface of Mars. The drive lasted a total of 33 minutes and spanned a total distance of about 21.3 feet (6.5 meters).

The move brought the rover 13 feet (4 meters) forward, where it then performed a 150 degree rotation to the left, and then backed up eight feet before coming to a stop at its new “home base” on Mars.

“When it comes to wheeled vehicles on other planets, there are few first-time events that measure up in significance to that of the first drive,” said Anais Zarifian, Mars 2020 Perseverance rover mobility testbed engineer at NASA’s Jet Propulsion Laboratory. “This was our first chance to ‘kick the tires’ and take Perseverance out for a spin. The rover’s six-wheel drive responded superbly. We are now confident our drive system is good to go, capable of taking us wherever the science leads us over the next two years.”

In addition to the important data gathered during Perseverance’s first six-wheel powered drive, scientists also took the opportunity to examine the effects of a powered rocket landing on the Martian surface. Engineers used the rover’s onboard hazard avoidance cameras to examine the “blast zone” from where the rover initially touched down.

As of March 13, the Perseverance rover website shows the vehicle has driven roughly 300 feet (about 91 meters). Additionally, the “belly pan” beneath the rover was ejected to reveal the bottom of the sample caching system. 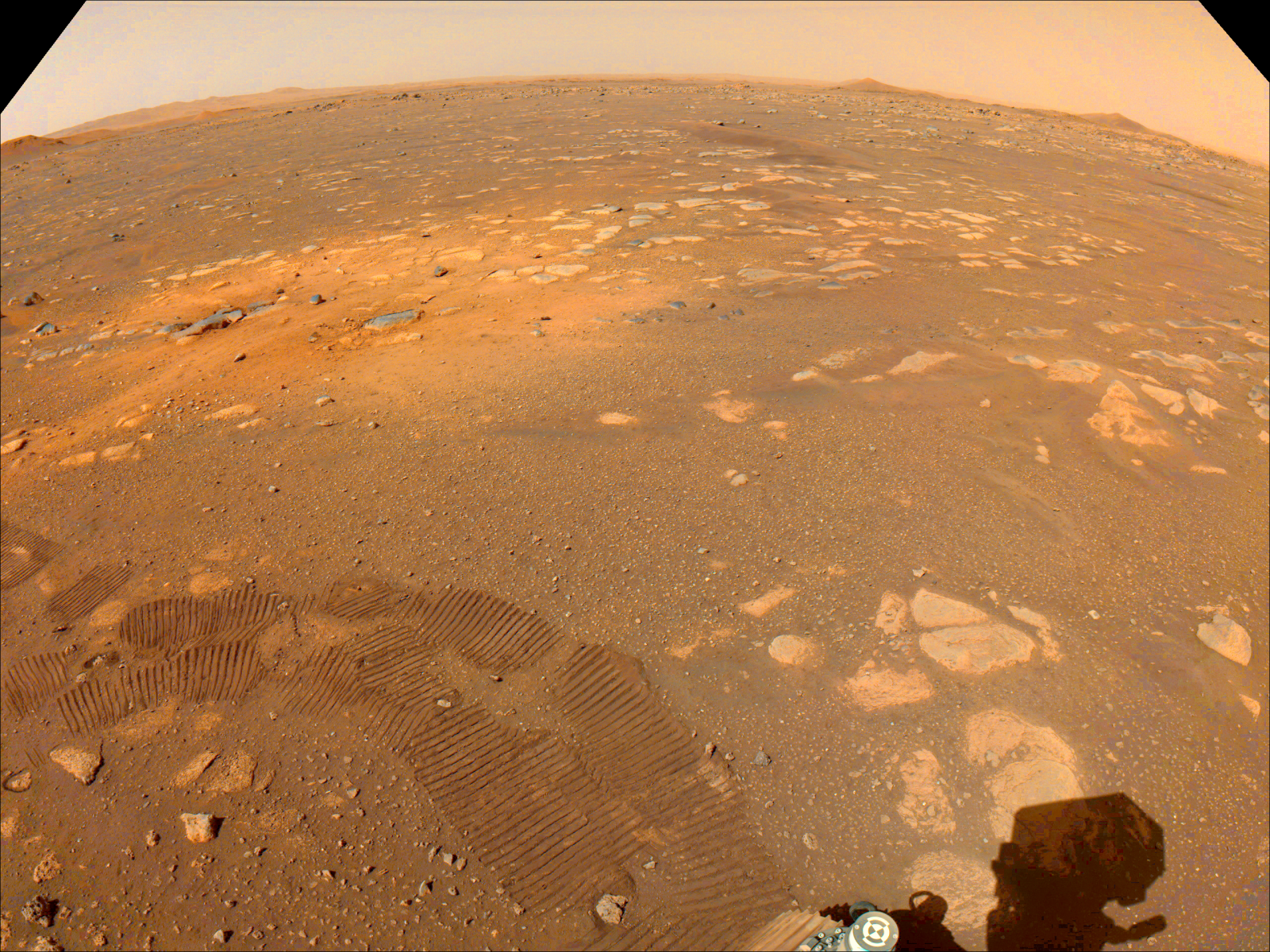 A view of an area scoured by the Perseverance rover’s descent stage. Credit: NASA/JPL-Caltech

One of the next major tasks will be the deployment of the miniature Martian helicopter named “Ingenuity.” It currently resides safely stowed underneath the rover. Engineers will need to find a suitable spot to deploy the helicopter.

Within the next several weeks, Ingenuity will make its debut, making short, autonomous flights in short bursts lasting approximately 20 seconds.

If the Ingenuity technology demonstrator is successful, it will mark the first time powered flight has been achieved from the surface of Mars. In order for the experiment to work, a lot of factors have to line up perfectly.

For starters, the weather has to be very calm. On Mars, the weather can change very rapidly, with conditions becoming incredibly hostile in a matter of minutes. In order to ensure that conditions are favorable, Airbus has developed an onboard automated weather reporting system that will monitor conditions in real time.

Much like a METAR aviation weather reporting system on Earth, the Airbus system will ensure that conditions are just right for Ingenuity’s flight.

The little Mars helicopter is just that—little. Weighing in at just about four pounds (1.8 kilograms), Ingenuity had to be small enough to not only fit on the rover, but also to be light enough to take flight in the thin atmosphere on Mars.

Since the atmosphere is indeed much thinner than that of Earth, the rotors on Ingenuity are quite large and make up the majority of surface area on the aircraft. The helicopter features two counter-rotating blades spanning approximately four feet (1.2 meters), and spinning at 2,800 rotations per minute. For comparison, the average rotation speed for helicopters on Earth is about 400 rotations per minute.

The helicopter is completely autonomous, as controllers on the ground experience an 11-minute Mars-to-Earth communication delay, making controlling the craft in real time impossible. Regardless of its success, the data that will be gathered from the attempted flights of Ingenuity will prove to be invaluable, giving scientists a new platform for advanced flight on the surface of Mars.