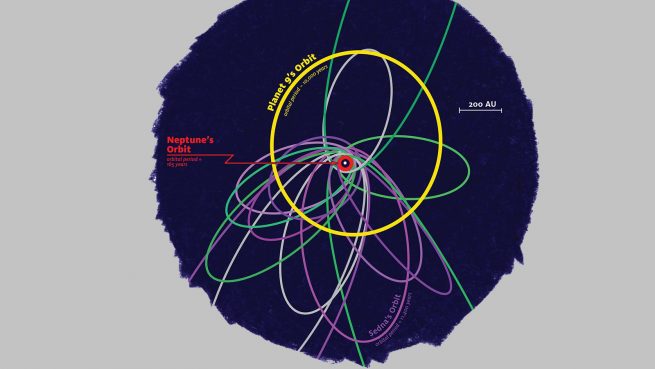 In new calculations, it is thought the hypothesized planet beyond Neptune and Pluto is about five Earth masses and resides in a “mildly-eccentric” 10,000-year orbit. Image Credit: James Tuttle Keane/Caltech

Two new academic papers, one published in The Astronomical Journal and the other in Physics Reports, present new evidence that a large, as yet undiscovered planet is lurking in the outer solar system.

Both papers coincide with the three-year anniversary of an announcement by astronomers Michael Brown and Konstantin Batygin, both of Caltech, of their theory that a large, distant planet is responsible for the unique clustering of several Kuiper Belt Objects (KBOs) far beyond Neptune and Pluto. Specifically, these KBOs are in orbits perpendicular to the plane of the solar system.

The planet is hypothesized to be in an elliptical orbit around the Sun and its gravitational tug to be the cause of the KBOs’ unique positions. At 37 billion miles (60 billion kilometers) beyond Earth, the body would take approximately 10,000 years to complete one orbit around the Sun.

Some scientists question whether the KBOs are genuinely clustered as Brown and Batygin describe, claiming the apparent clustering could be the result of observation bias rather than real.

Brown and Batygin are not the first to propose the existence of one or more large outer solar system planets. To date, searches have not discovered any of these proposed worlds.

Fred Adams of the University of Michigan, who believes this latest proposed planet exists and is lead author of the second paper, expects it to be found within the next 10 to 15 years through deeper and more sensitive sky surveys.

“I think by 2030, we will have seen it or will have a better idea of where it is,” Adams said. “Of course, it’s also possible that by then, we could have alternative explanations for the observed orbital abnormalities.”

One alternative explanation is that either a star or brown dwarf passed close to the solar system long ago, perturbing the KBOs in question. A citizen science search for the hypothetical planet did turn up several relatively nearby brown dwarfs though none are in solar orbit.

In their latest research, Brown and Batygin created a method to test for bias in each individual observation of the supposedly clustered KBOs. Their method yielded a one in 500 chance that the observations were biased or incorrect.

Adams and his colleagues conducted a separate study using computer models of the solar system’s dynamical evolution and the possible influence of a distant, massive planet. Their findings suggest the proposed planet is smaller and closer to the Sun than initially thought, orbiting approximately 37 billion miles (60 billion kilometers) beyond the Earth.

With a size five to 10 times that of Earth, the planet would be too small to be a gas giant, but would instead be a super-Earth much like those found in many exoplanet systems.

“It is the solar system’s missing link of planet formation,” Adams said. “Over the last decade, surveys of extrasolar planets have revealed that similar-sized planets are very common around other Sun-like stars.”

A super-Earth in the outer solar system, Adams said, would serve as “the closest thing we will find to a window into the properties of a typical planet of our galaxy.” 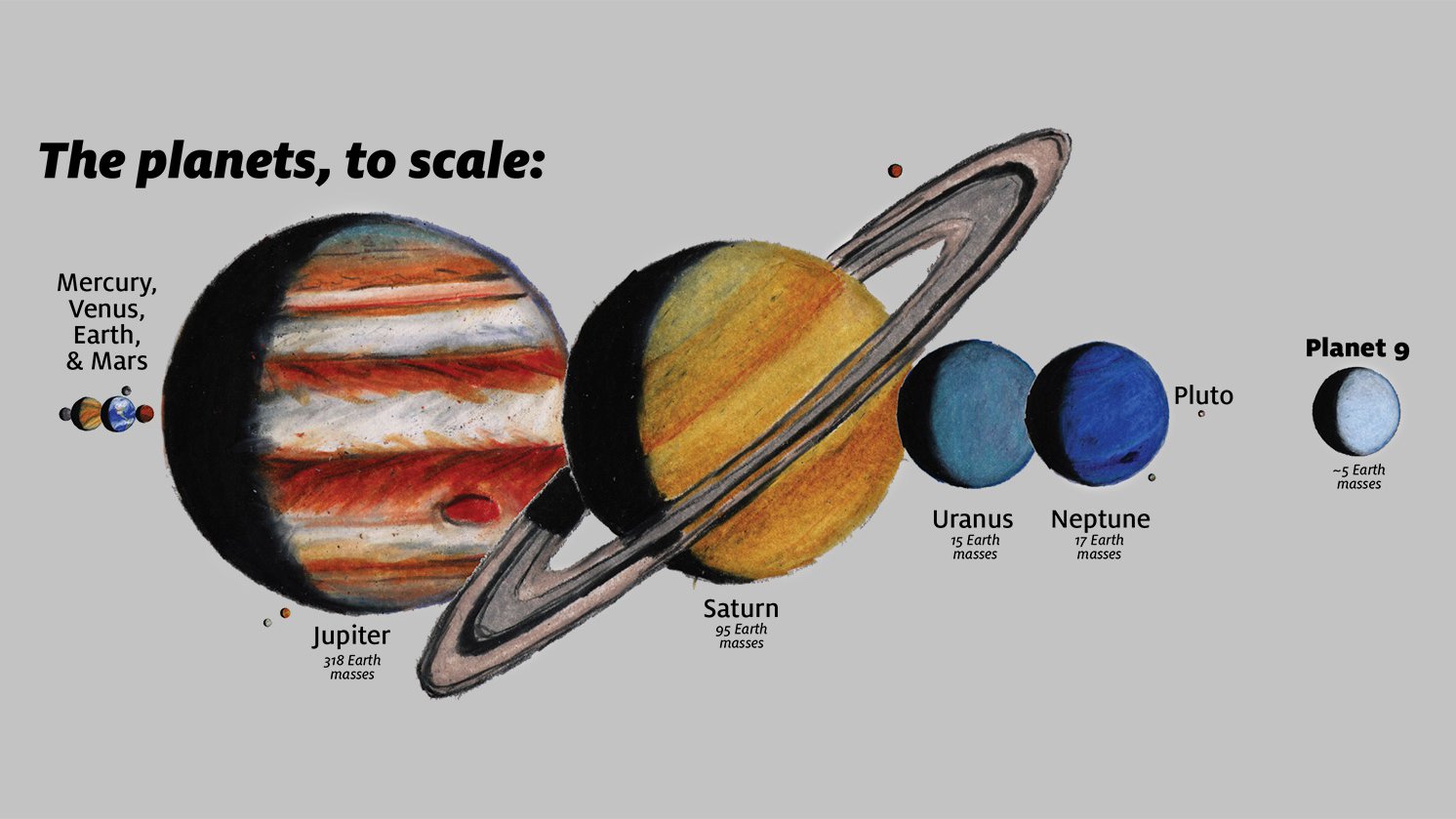 An illustration of the sizes of the known solar system planets compared to the hypothisized body well beyond Neptune and Pluto. Image Credit: James Tuttle Keane/Caltech

Is there life on it? Can it sustain life? Academia and the media really need to stop applying the misleading “Earth” label to extrasolar terrestrial worlds.

Who is at fault? Them for using the term “super earth” correctly, or you, for being too goddamn dense to know the difference?

Indeed…we only know of one place on the universe that supports life. ….And it may end up like Mars by the time we’re done with it.