Vista From Mars Rover Looks Back Over Journey So Far Climbing “Vera Rubin Ridge” provided NASA’s Curiosity Mars rover this vista of the interior and rim of Gale Crater, including much of the rover’s route since its 2012 landing and features up to about 50 miles away. The left-eye camera of the rover’s Mastcam took the component images Oct. 25, 2017. Image Credit: NASA/JPL-Caltech/MSSS

Members of NASA’s Curiosity team combined individual photos taken by the rover’s Mast Camera (Mastcam) on the northern flank of Mount Sharp to create a panorama that overlooks the many sites the six-wheeled geologist has visited since landing on Mars in 2012.

Taken in Oct. 2017 from the mountainous area known as Vera Rubin Ridge, the images were returned on Jan. 22 by NASA’s Mars Atmosphere and Volatile Evolution Mission (MAVEN) orbiter, which set a record by sending back more than a gigabyte of data from the Red Planet in just one session.

The panoramas provide a sweeping vista of the many areas Curiosity has visited and studied since landing in Gale Crater, along with views of distant mountains beyond the crater. Most of the crater’s northern rim, which rises about 1.2 miles (2 km) above where Curiosity rolls, is visible.

Much of the 11-mile (18 km) journey the rover has traversed is also visible in the panoramic images.  On the northern horizon, a hill rises about 50 miles (85 km) beyond Gale Crater.

An annotated version of the panoramic image listing the names of the locations Curiosity visited was also released.

A viewpoint on “Vera Rubin Ridge” provided NASA’s Curiosity Mars rover, this detailed look back over the area where it began its mission inside Gale Crater, plus more-distant features of the crater. The right-eye, telephoto-lens camera of the rover’s Mastcam took the component images Oct. 25, 2017. Image Credit: NASA/JPL-Caltech/MSSS

Curiosity’s landing site at the bottom of the crater cannot be seen, as it is blocked by a slight ridge.

Notable sites that are visible include several areas that may have harbored water in the planet’s ancient past. In 2013, evidence of a long-ago freshwater environment capable of hosting the chemicals needed by microbial life was discovered in the region known as “Yellowknife Bay.”

Slightly further north, in an area known as “Peace Vallis,” the rover found evidence of ancient streams that may have brought water and sediments into Gale Crater three billion years ago.

Gale Crater has a diameter of some 96 miles (154 km), with Mount Sharp sitting at its center.

“Even though Curiosity has been steadily climbing for five years, this is the first time we could look back and see the whole mission laid out below us,” noted Curiosity Project Scientist Ashwin Vasavada of NASA’s Jet Propulsion Laboratory (JPL) in Pasadena, California via a release. “From our perch on Vera Rubin Ridge, the vast plains of the crater floor stretch out to the spectacular mountain range that forms the northern rim of Gale Crater.”

Since taking the photos with which the panoramas were created, Curiosity has climbed 85 feet (26 meters). Mastcam captured another series of images from its current location over the last few days, which mission members will use to produce another panorama looking upward and southward at the region Curiosity will next visit.

Because clay minerals have been seen at that site by orbiters, the location has been dubbed “Clay Unit.”

Before departing for Clay Unit, mission scientists plan to drill into Vera Rubin Ridge to acquire powdered rock samples for analysis by the rover’s science instruments. This will be the first use of the drill since a 2016 motor malfunction, which the team has figured out how to bypass.

MAVEN is not the primary vehicle for transmitting Curiosity data back to Earth, as it is in an elliptical orbit that often puts it too far from the rover to accomplish this. Instead, NASA’s Mars Reconnaissance Orbiter (MRO) and Mars Odyssey, both in circular orbits around Mars, have sent back most of the data collected by the rover.

MAVEN is capable of returning high volumes of data, and mission scientists plan to use it again for this purpose during the times its closest approach to Mars puts it near Curiosity. 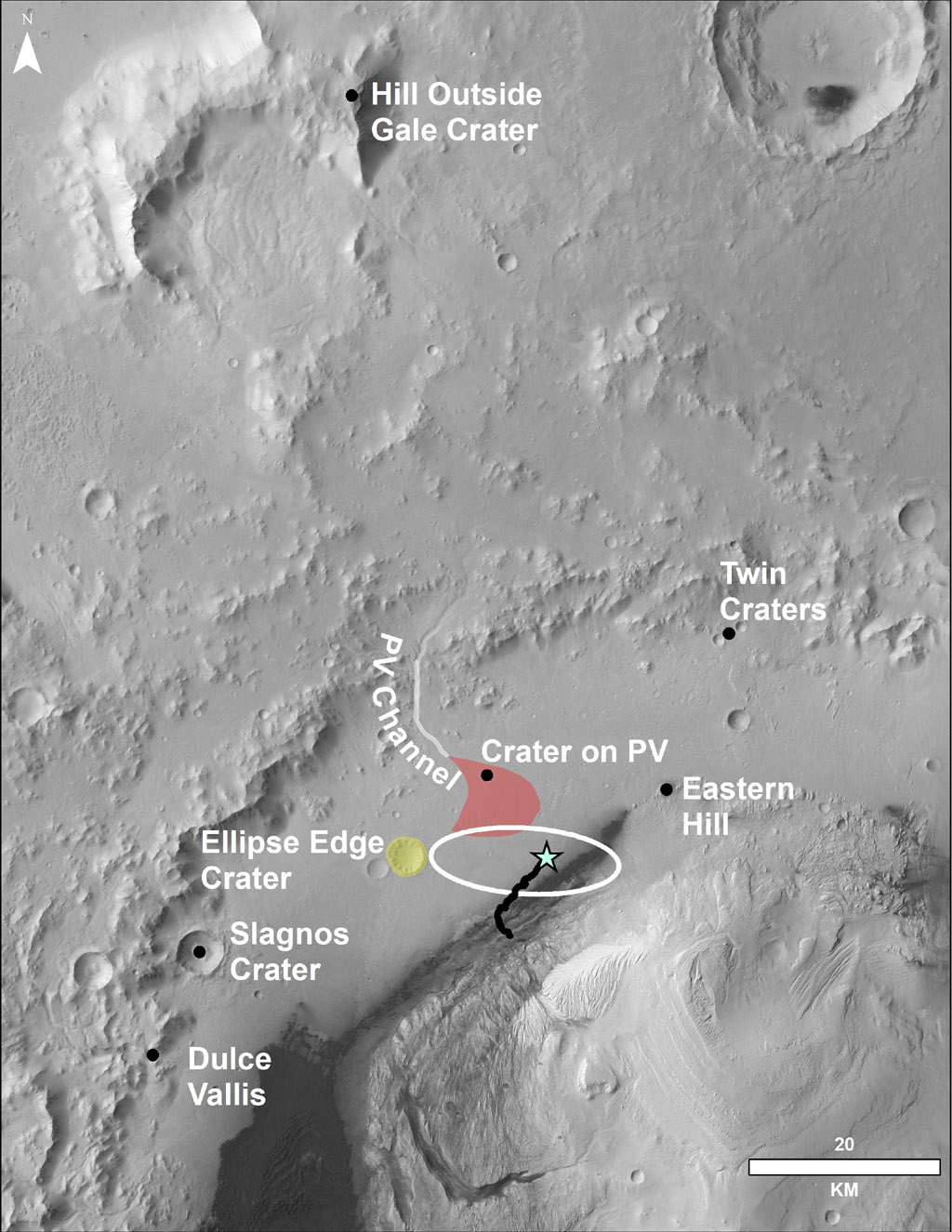 This image of the northwestern portion of Mars’ Gale Crater and terrain north of it, from the European Space Agency’s Mars Express orbiter, provides a locator map for some features visible in an October 2017 panorama from NASA’s Curiosity Mars rover. Image Credit: ESA/DLR/FU Berlin/NASA/JPL-Caltech