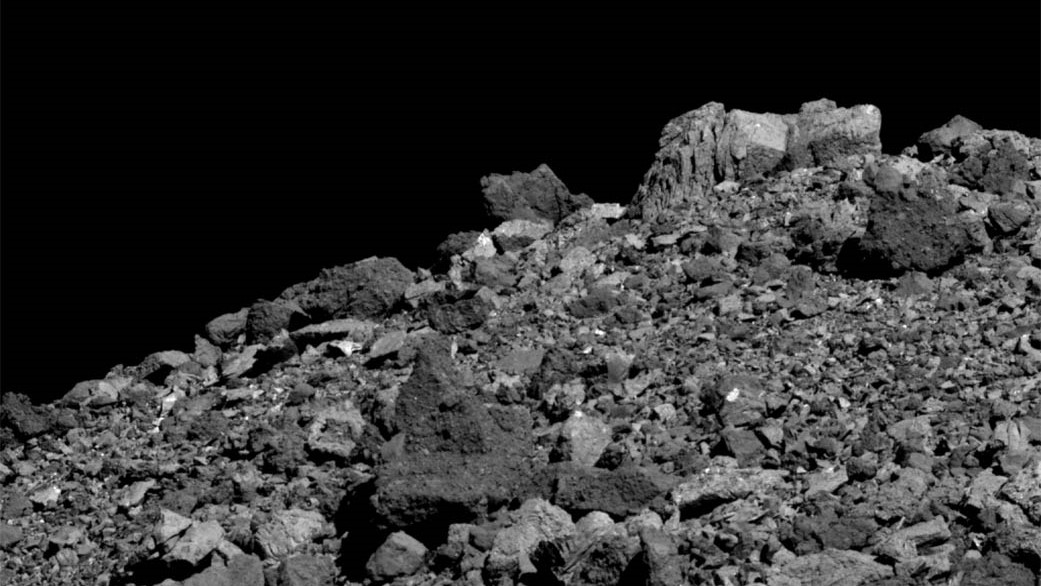 This image shows the wide variety of boulder shapes, sizes and compositions found on asteroid Bennu. It was taken by the PolyCam camera on NASA’s OSIRIS-REx spacecraft on March 28 from a distance of 2.1 miles or 3.4 km. The field of view is 162.7 ft or 49.6 m. For scale, the large, light-colored boulder at the top of the image is 15.7 ft or 4.8 m tall. Photo Credit: NASA/Goddard/University of Arizona

NASA’s OSIRIS-REx mission is seeking help from citizen scientists in choosing a site on asteroid Bennu to collect surface samples that will be brought back to Earth for analysis.

The spacecraft, which arrived at Bennu in December 2018, has been mapping the asteroid to help mission scientists choose a site for sample collection.  Because its surface is very rocky and composed of boulders that could be hazardous to the probe, the mission team is reaching out to citizen scientists, asking them to count and measure boulder sizes in an effort to create a hazard map.

CosmoQuest, a Planetary Science Institute (PSI) citizen science effort that already hosts numerous projects, including an exoplanet search using Kepler and TESS data, is partnering with the mission, which is scheduled to collect samples of Bennu in July 2020 and return them to Earth three years later.

“For the safety of the spacecraft, the mission team needs a comprehensive catalog of all the boulders near the potential sample collection sites, and I invite members of the public to assist the OSIRIS-REx mission team in accomplishing this essential task,” said OSIRIS-REx principal investigator Dante Lauretta of the University of Arizona at Tucson.

To participate, volunteers must have a computer with a relatively large screen and a mouse or trackpad that can precisely mark images. CosmoQuest uses a web interface participants are taught to use through a tutorial. Additional assistance is available through live sessions on Twitch and a mission volunteer group on Discord.

Between now and July 10, volunteers are expected to essentially do the same work as mission scientists, measuring and marking Bennu’s boulders and rocks very precisely as well as identifying specific sites for more detailed studies by the spacecraft. Mission scientists are then planning to select primary and secondary sample sites based on data inputted by the volunteers.

These sites will subsequently be mapped by the spacecraft at very high resolution.

“We are very pleased and excited to make OSIRIS-REx images available for this important citizen science endeavor. Bennu has surprised us with an abundance of boulders. We ask for citizen scientists’ help to evaluate this rugged terrain so that we can keep our spacecraft safe during sample collection operations,” said OSIRIS-REx project director Rich Burns of NASA’s Goddard Space Flight Center.

Lori Glaze of NASA’s Planetary Science Division described OSIRIS-REx as continuing the legacy of the Apollo Moon missions, which returned 842 pounds (382 kilograms) of Moon rocks and soil. Like the lunar samples, those taken from Bennu will provide scientists with insight into the process through which the solar system’s planets formed.

Those interested in being part of this project can visit Bennu.cosmoquest.org.