Nobody knows what these mysterious plumes are on Mars 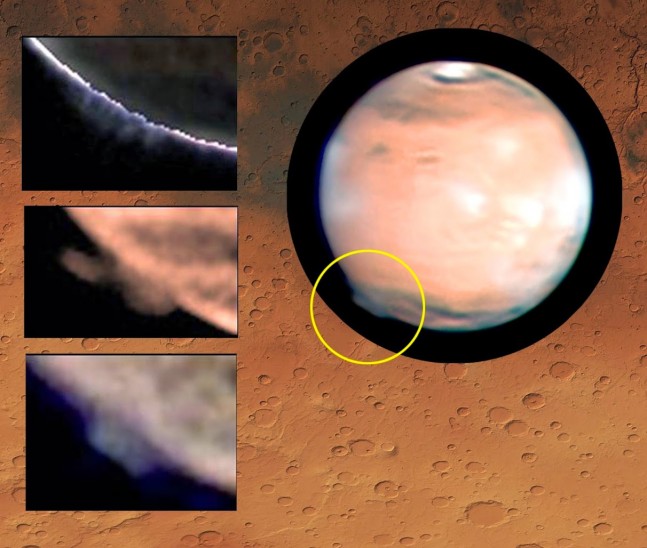 Mysterious cloud-like plumes have been detected in the Martian atmosphere. Image Credit: NOAA

In March 2012, amateur astronomers began observing unusual clouds or plumes along the western limb of the red planet Mars. The plumes, in the southern hemisphere rose to over 124 miles (200 kilometers) in altitude persisting for several days and then reappeared weeks later. A group of astronomers from Spain, the Netherlands, France, UK and USA have now reported their analysis of the phenomena. Their conclusions are inconclusive but they present two possible explanations.

Mars and mystery are synonymous. Among Martian mysteries, this one has persisted for three years. Our own planet, much more dynamic than Mars, continues to raise new questions and mysteries but Mars is a frozen desert. Frozen in time are features unchanged for billions of years.

In the Journal Nature, astronomers deliver an exhaustive study of limited albeit high quality ground-based observations of Mars and come up short. A Martian mystery remains. What caused the extremely high-altitude plumes on Mars? (Credit: Nature, Sánchez-Lavega, A. et al. Feb 16, 2015, Figures 1a, 2)

In March 2012, the news of the observations caught the attention of Universe Today contributing writer Bob King. Reported on his March 22nd 2012 AstroBob blog page, the plumes or clouds were clear to see. The amateur observer, Wayne Jaeschke used his 14 inch telescope to capture still images which he stitched together into an animation to show the dynamics of the phenomena.

Now on Feb. 16 of this year, a team of researchers led by Agustín Sánchez-Lavega of the University of the Basque Country in Bilbao, Spain, published their analysis in the journal Nature of the numerous observations, presenting two possible explanations. Their work is entitled: “An Extremely high-altitude plume seen at Mars morning terminator.”

The phenomena occurred over the Terra Cimmeria region centered at 45 degree south latitude. This area includes the tiger stripe array of magnetic fields emanating from concentrations of ferrous (iron) ore deposits on Mars; discovered by the Mars Global Surveyor magnetometer during low altitude aerobraking maneuvers at the beginning of the mission in 1998. Map from the Mars Global Surveyor of the current magnetic fields on Mars. Image Credit: NASA/JPL

Auroral events have been observed over this area from the interaction of the Martian magnetic field with streams of energetic particles streaming from the Sun. Sánchez-Lavega states that if these plumes are auroras, they would have to be over 1000 times brighter than those observed over the Earth.

The researchers also state that another problem with this scenario is the altitude. Auroras over Mars in this region have been observed up to 80 miles (130 km), only half the height of the features. In the Earth’s field, aurora are confined to ionospheric altitudes – 60 miles (100 km). The Martian atmosphere at 124 miles (200 km) is exceedingly tenuous and the production of persistent and very bright aurora at such an altitude seems highly improbable.

An animated sequence of images taken by Wayne Jaeschke on March 20, 2012 showing the mystery plume over the western limb of the red planet (upper right). South is up in the photo. Image Credit: W. Jaeschke

The duration of the plumes – March 12th to 23rd, eleven days (after which observations of the area ended) and April 6th to 16th – is also a problem for this explanation. Auroral arcs on Earth are capable of persisting for hours. The Earth’s magnetic field functions like a capacitor storing charged particles from the Sun and some of these particles are discharged and produced the auroral oval and arcs. Over Mars, there is no equivalent capacitive storage of particles. Auroras over Mars are “WYSIWYG” – what you see is what you get – directly from the Sun. Concentrated solar high energy streams persisting for this long are unheard of.

The second explanation assessed by the astronomers is dust or ice crystals lofted to this high altitude. Again the altitude is the big issue. Martian dust storms will routinely lift dust to 37 miles (60 km), still only one-third the height of the plumes. Martian dust devils will lift particles to 12 miles (20 km).

However, it is this second explanation involving ice crystals – carbon dioxide and water – that the researchers give the most credence. In either instance, the particles must be concentrated and their reflectivity must account for the total brightness of the plumes. Ice crystals would be more easily transported to these heights, and also would be most highly reflective.

The paper also considered the shape of the plumes. The remarkable quality of modern amateur astrophotography cannot be overemphasized. Also the duration of the plumes was considered. By local noon and thereafter they were not observed. Again, the capabilities tendered by ground-based observations were unique and could not be duplicated by the present set of instruments orbiting Mars.

Mars photographed by Hubble in March 1997. The left image is a full-color view; the right was taken through a blue filter to emphasize the clouds. Most Martian clouds are found in the equatorial and polar regions. Polar clouds are widespread during the Martian fall and winter. Image Credit: NASA/ESA

Still too many questions remain and the researchers state that “both explanations defy our present understanding of the Mars’ upper atmosphere.” By March 20th and 21st, the researchers summarized that at least 18 amateur astronomers observed the plume using from 8 to 16 inch diameter (20 to 40 cm) telescopes at wavelengths from blue to red. At Mars, the Mars Color Imager on MRO (MARCI) could not detect the event due to the 2 hour periodic scans that are compiled to make global images.

Of the many ground observations, the researchers utilized two sets from the venerable astrophotographers Don Parker and Daiman Peach. While observations and measurements were limited, the researchers analysis was exhaustive and included modeling assuming CO2, water and dust particles.

The researchers did find a Hubble observation from 1997 that compared favorably with the 2012 events and likewise modeled that event for comparison. However, Hubble results provided a single observation and the height estimate could not be narrowly constrained. Explanation of these events in 2012 are left open-ended by the research paper. Additional observations are clearly necessary. With increased interest from amateurs and continued quality improvements plus the addition of the Maven spacecraft suite of instruments plus India’s Mars Orbiter mission, observations will eventually be gained and a Martian mystery solved to make way for yet another.

This article first appeared on Universe Today and can be viewed here: Martian Plume

Greetings: The cause of this mystery dust plume is related to Sun-Earth-Black Star magnetic portal connection convergence, portal-to-portal cross firing and the generation of highly-charged ionic clouds pushed towards the Sun between the converging portal connections.

This is a link to the reconstructed ISWA-imaging data showing Earth magnetosphere turning around for the bow shock to face the Leo Constellation on the same day!

My research team has been tracking the gravitational-magnetic anomaly through the Leo Constellation (2010-2012), Virgo (2012-2015) and now into the Libra Constellation since January 2011. We predicted the Fukushima Quake (March 11, 2011) to within four days and the Guerrero Quake the following year within just two days (March 20, 2012), which was eight days after Earth magnetosphere turned around for 28 hours and this mystery dust plume appeared in the southern hemisphere on the dark side of the red planet.

The recent 6.9 Hawaii Quake Event is also related to a predicted Sun-Earth-Black Star alignment, but this event struck early due to Jupiter solar-system-harmonic-induced electromagnetic forces, as Jupiter was just right of the Sun-Earth-Black Star alignment position. We are living inside a 2012 Movie where the Elite has Green Cards for gaining access to the Rothschild-owned Underground Ark Cities like the one connected to the Denver Airport once their Georgia Guidestones Agenda becomes the New World Order reality, according to what you can read in the Operations Section of the Dakota Report:

Therefore, our team of astronomers and physicists are not alone in knowing full well what caused the mystery dust plume anomaly on Mars on March 12, 2012, which is perhaps the most important series of events pointing to the absolute fact that we have a gravitational-magnetic anomaly already moving in the inner solar system that is likely the invisible-collapsed-remnant remains of our Sun’s once much-larger binary twin. I am happy to share more information on my Project Black Star Investigation if anyone is interested.

Here is a complimentary link to my recent newsletter. Get more information, subscribe to the newsletter-survival group programs at https://www.terral03.com, again, if interested.