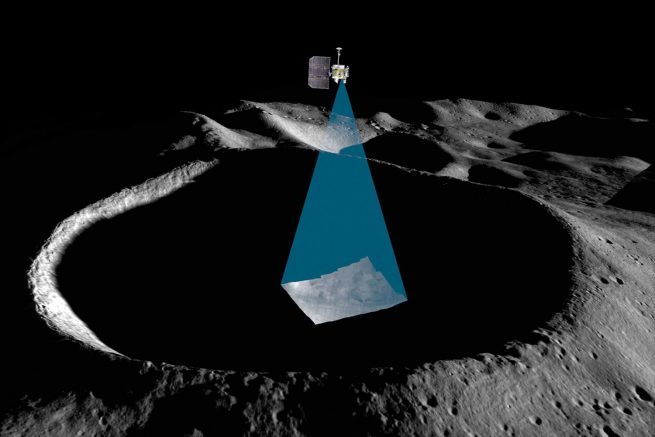 A rendering of the Lunar Reconnaissance Orbiter over Shackleton Crater on the Moon. Image Credit: NASA

Recently, NASA’s Lunar Reconnaissance Orbiter made an observation that could help scientists understand the water cycle present on the lunar surface.

Measurements the Moon’s hydration and how it changes throughout the lunar day were taken using the Lyman Alpha Mapping Project, affectionately known as “LAMP.”

LAMP has a light collection feature that measures reflected signals on “the light side of the moon” which allows scientists on earth to accurately measure if there is water, and how much of it might be present.

According to NASA, until recently, the majority of scientists believed the lunar surface was much like that of a desert; dry, arid, and void of any signs of life. It was hypothesized that water existed only in small pockets of ice near the lunar polar caps.

The ultimate hope for these recent observations that they could aid NASA and industry in the understanding of lunar water and how it could be used on future exploration missions to the Moon.

“These results aid in understanding the lunar water cycle and will ultimately help us learn about accessibility of water that can be used by humans in future missions to the Moon,” Amanda Hendrix, a scientist at the Planetary Science Institute, said in a NASA news release. “[Water] can potentially be used by humans to make fuel or to use for radiation shielding or thermal management.”

Scientists currently believe that ions of hydrogen that are embedded in solar winds may account for the moon’s collection of water molecules at the surface.

In conjunction with the LRO’s recent discovery, scientists now believe they have an understanding of how water is stored, behaves, and builds up over time on the lunar surface.