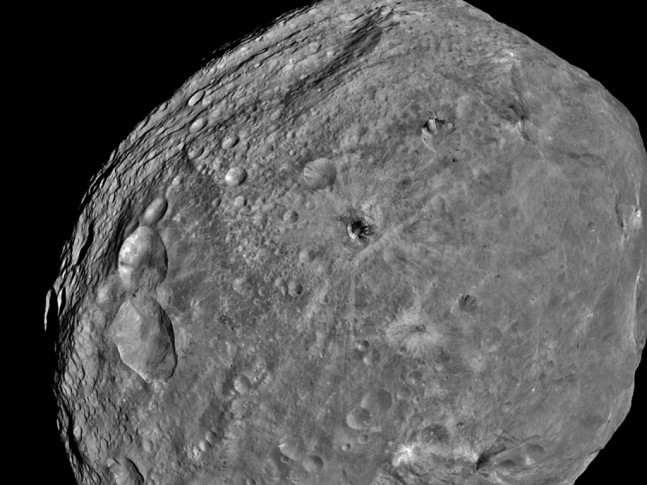 On Tuesday, March 31, NASA announced the release of Vesta Trek, a free web-based application that provides detailed visualizations of Vesta – one of the largest asteroids in the Solar System. The application uses data acquired by NASA’s Dawn spacecraft during its exploration of Vesta from July 2011 to September 2012. Vesta Trek provides a number of user-friendly tools that citizen scientists and students can use to study the asteroid’s features.

The Vesta Trek application features include interactive maps that allow users to overlay a number of data sets including topography, mineralogy, geology, and abundant elements; it also includes analysis tools for measuring the diameters, heights, and depths of the asteroid’s surface features. Other features include 3-D printer-exportable topography that enables users to make physical models of the asteroid’s surface and standard keyboard controls to maneuver a first-person visualization of “flying” across the surface of Vesta. A Color Hillshade view of Vesta’s South Pole provides a clear view of topography and makes it easy to pick out the giant 500-km diameter Rheasilvia crater. Image Credit: NASA

NASA’s Lunar Mapping and Modeling Project (LMMP) developed the Vesta Trek mission. LMPP, which is managed by NASA’s Solar System Exploration Research Virtual Institute (SSERVI), provides mission planners, lunar scientists, and the public with visual data and analysis tools for the Moon. Vesta Trek is LMMP’s first project for a mission beyond the Moon. LMMP is currently developing visualization tools for other worlds in the Solar System.

“There’s nothing like seeing something with your own eyes, but these types of detailed data-visualizations are the next best thing,” said Kristen Erickson, Director, Science Engagement and Partnerships at NASA Headquarters in Washington DC. “We’re thrilled to release Vesta Trek to the citizen science community and the public, not only as a scientific tool, but as a portal to an immersive experience that, just by the nature of it, will allow a deeper understanding of Vesta and asteroids in general.” Vesta Trek’s interface allows explorers to fly around and even skim the surface of Vesta.
Image Credit: NASA

Dawn’s payload of scientific instruments consists of two cameras, a visible and infrared mapping spectrometer to reveal the surface minerals, and a gamma ray and neutron spectrometer to determine the elements that make up the outer parts of the asteroids. As noted, the spacecraft has an ion propulsion system and is powered by two large solar panels that stretch 65 feet (19.8 meters) from tip to tip.

By studying two very different bodies within the asteroid belt, the Dawn mission team hopes to find the answers to many questions about the formation and early history of the Solar System. LLMP will continue to work closely with the Dawn mission as the spacecraft conducts its measurements and mapping of Ceres.